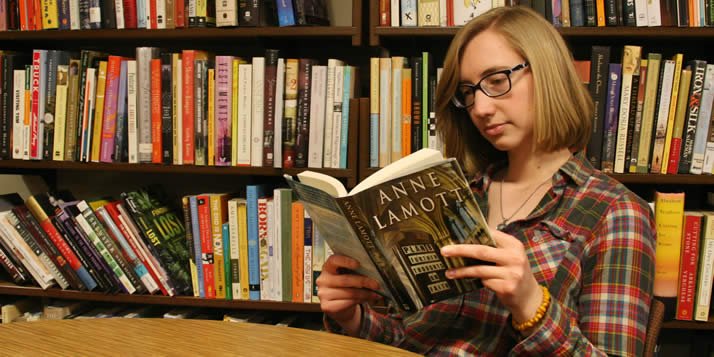 Linnea McLaughlin reading the work of Anne Lamott, who she will host in April.

Linnea McLaughlin is one of 46 students serving on the Festival of Faith and Writing (FFW) student committee. Between now and April 10—the date festival begins—the senior Latin major will help with publicity, do some blogging and read the work of some of the festival authors.

“When people hear I’m on the Festival of Faith and Writing committee, they often ask wide-eyed, in a sort of reverent whisper, if I’m going to meet Anne Lamott,” said McLaughlin, “and when I tell them I’m hosting her, they really lose it.”

During the festival, McLaughlin’s responsibilities center on hospitality. Each student is responsible for hosting one or two authors. For McLaughlin, it’s one of her favorites. She says Lamott’s writing has influenced hers for a long time, dating back to eighth grade, when she first ran across the accomplished author’s Bird by Bird: Some Instructions on Writing and Life.

“Part of me is thrilled to meet her, and part of me is intimidated to be hosting such a popular speaker,” said McLaughlin.

Fellow committee member Katie Van Zanen is equally nervous. The senior writing major is hosting Miroslav Volf, whose book Exclusion and Embrace: A Theological Exploration of Identity, Otherness, and Reconciliation was named one of the 100 most important religious books of the twentieth century by Christianity Today.

“He’s an influential Christian thinker, which makes him a bit more intimidating than your average writer,” said Van Zanen.

There are a number of accomplished authors and writers expected at this year’s Festival, including two current National Book Award winners in James McBride (fiction) and Mary Szybist (poetry), New York Times best-selling author Rachel Held Evans and the first graphic novelist to be nominated for a National Book Award, Gene Luen Yang.

And for as conference-experienced as many of these authors are, FFW opens up fresh conversations.

“One year, I spoke with an author on the phone. He wanted to know more about what we do here, so I asked him this question: ‘What does it mean to be a reader/writer of faith?,’” said Shelly LeMahieu Dunn, the director of FFW. “There was a long pause, and he said, ‘Nobody’s ever asked me that question before.’ That’s why we do this—we ask those questions that writers don’t typically have the chance to talk about.”

But it’s a conversation Calvin students know well, and one that they say is well aligned with the college’s mission.

“At Calvin we like to explore how faith intersects with all aspects of our lives, and the festival gives us a chance to do this as writers and readers,” said McLaughlin.

“Our hosting of the festival also speaks to a commitment to engaging culture, valuing art and excellence, and inviting conversation,” added Van Zanen.

Organizers of the weekend are expecting 1,800 attendees—readers, writers and other literary enthusiasts from all over the world.

“The festival welcomes people from Japan, Great Britain, London, Italy, China—it’s lovely,” said LeMahieu Dunn. “We have the privilege of throwing a three-day party for people who love books, who love writing; that’s so exciting.”

And organizers say it’s much more than a literary party. They say festival meets a real need—providing a venue for readers and writers to come together and join a conversation about what it means to be a reader and writer of faith and how to do it faithfully.

“It’s important to provide our students with models of faithful, articulate, artful writing and to introduce them to people who are struggling with doing this well,” said LeMahieu Dunn. “The conversation about faith and writing is multifaceted—and bringing students into that conversation is central to what we do.”

“Using language faithfully is central to the Christian life, so thinking intentionally and communally about narratives, what and how they mean, equips us to more richly live the story of faith,” said Van Zanen. 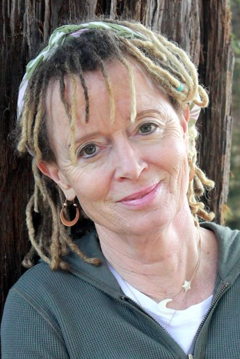 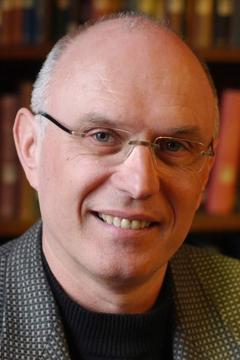 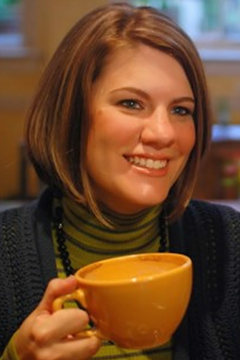 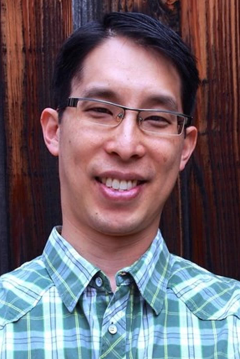