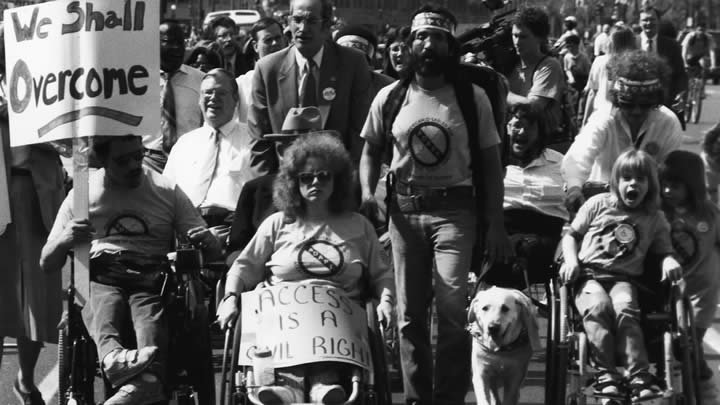 "March on Washington 1990" will be on display at (106) Gallery and Studio as part of "Access is a Civil Right: The Photography of Tom Olin."

“I think that art is one of the best ways to change people’s minds,” said Chris Smit, professor of communication arts and sciences at Calvin College. “It gets people thinking and questioning things that they maybe take for granted.”

Smit is using this function of art to transform society’s perception of disability. As director of the inaugural DisArt Festival, an event that showcases art created by people with disabilities, Smit hopes to show that disability is part of the human condition and not something to be feared.

An idea comes to life

A board member at Disability Advocates of Kent County (DAKC), Smit was part of the conversation that inspired the DisArt Festival.

“The stereotype is that to be a successful disabled person, you have to overcome your disability rather than live through it,” said Smit. “At DAKC, what we’re trying to do is figure out ways to get people’s imaginations changing, perceptions changing. I took that idea and ran with it.”

The festival has been in development for 18 months and will take place April 10-25 in Grand Rapids.

Leveraging the momentum created by local festivals like ArtPrize and LaughFest, DisArt aims to change perceptions about disability through art that celebrates it.

The festival comprises several exhibits such as photography and painting, a film festival, fashion show, theater, dance performances, and other family-oriented experiential learning opportunities. Their goal is to have around 20,000 people attend the different events.

Cachia wanted to bring ALE to the U.S. so Smit highlighted Grand Rapids as the perfect location.

“They loved the idea and all of a sudden we have this world class art exhibit coming to Grand Rapids, and DisArt really helped broker that deal,” Smit said.

From there, DisArt organizers began building the festival around the ALE exhibition, making it the heart of the festival. This marks the first time an international disability art exhibit of this magnitude will come to the United States.

When asked where to bring ALE, Smit told Cachia, “Well, you could go to Chicago, New York or L.A. and get swallowed up by a big city. Or you could come to Grand Rapids where we have citizens that love art festivals and understand how they work.”

The City of Grand Rapids has partnered with DisArt as part of Mayor Heartwell’s initiative that commissions 2015 as the Year of Arts and Access.

“DisArt Festival will no doubt shine as another example of Grand Rapids’ commitment to people with disabilities, to the arts, and to creating a vibrant culture of ingenuity,” said Heartwell.

DisArt plans to encompass the theme of arts and access through academic symposiums and public talks in addition to the art festival, which organizers hope will be a biennial event.

DisArt is also committed to making the festival 100% accessible by providing accommodations for people with hearing and visual impairments, social anxiety and those with physical access limitations.

This commitment echoes Smit’s desire for disability to flourish in community, between all types of people.

“DisArt is not interested in the idea of eradicating disability,” Smit said. “We would rather celebrate it.”

The public is invited to a talk by Smit and Van Arragon on Calvin's campus at 4 p.m. on Wednesday, March 11, in Spoelhof 150. It will be an informational meeting in which they present the mission of the DisArt festival, survey the exhibitions and programming including the fashion workshops and show, answer questions and encourage volunteer signups. 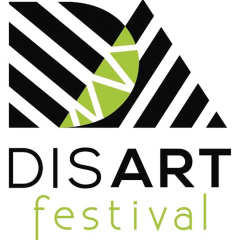 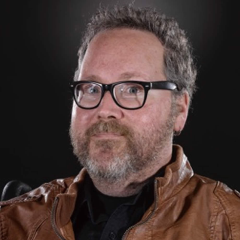 Elizabeth Van Arragon, associate professor of art history at Calvin, serves as DisArt Festival’s exhibitions coordinator. Van Arragon (married to Chris Smit) is curating an exhibition for the festival, titled "Access is a Civil Right: The Photography of Tom Olin." Tom Olin is a photographer who has been documenting the disability rights movement since it began in the early 1980s.

Breaking the stereotype of disabled people as victims, invalids, social deviants or as abnormal, Olin portrays people with disabilities as authoritative and empowered.

Olin’s photographs depict activist portraits, protests and marches, arrests made at these events, and the passage of the Americans with Disabilities Act in 1990. The exhibition celebrates the 25th anniversary of the act’s passage and educates viewers on the events surrounding it.

“In Olin’s photographs, we see disabled people of all kinds; a cross section of American life,” said Van Arragon. “We don’t see a photo with a label. It’s not a medical representation. It is a photograph of a person interacting in public space using a strong public presence demanding their rights.”

Access is a Civil Right will be on display at 106 S. Division, Calvin’s downtown art gallery, from April 10-June 14.

For a complete list of exhibitions and events, including a community performance at Calvin’s Covenant Fine Arts Center, click here.