Farm knowledge from the engineering lab 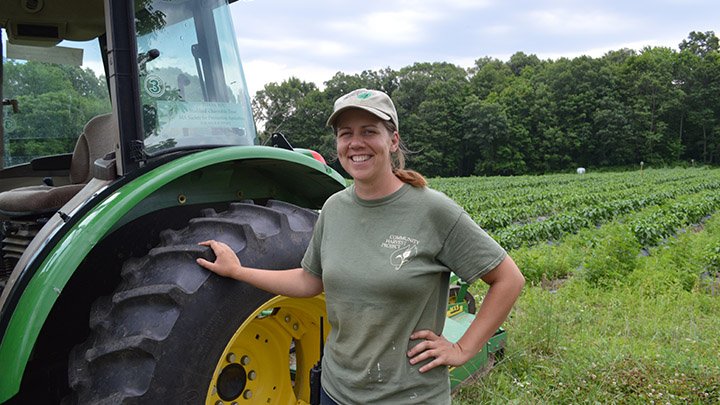 Most people choose a major in hopes that they will get a job in that field eventually, but not Annie Stegink ’09. Stegink had one thing on her mind from day one of studying civic and environmental engineering at Calvin: farming.

“I was really into hands-on labor [in high school], but my parents really encouraged me to go to college,” Stegink said. “After choosing to go to Calvin, I decided to go into engineering because I figured it was a degree that I could transition [from] into either agricultural engineering or constructional engineering. I figured that no matter what I learned, it would contribute to farming or construction later down the line.”

Stegink first saw that hope manifested shortly after graduating from Calvin while volunteering on a farm in Brazil. There, she designed and built a composting latrine for farmers who didn’t have enough water to use flush-toilets, and she also worked on a project that turned methane gas from cow manure to cooking fuel. The following year, she worked on a construction project in Haiti.

Now, as the assistant farm manager of the Community Harvest Project non-profit farm in Grafton, Massachusetts, Stegink uses her engineering knowledge each day.

“I’m always fixing tractors or irrigation systems, or trying to modify a process to make it more efficient,” Stegink said. “The overall principle of engineering is problem-solving, and that’s the biggest part of engineering that I’ve carried.”

In addition to fixing things around the farm, Stegink manages five interns and helps prepare the daily field volunteers. “We have a lot of volunteers, and we wouldn’t be able to do it without them—they show up rain or shine. It’s pretty awesome to see,” Stegink said. “It’s so wonderful to be able to work at a place with so much positivity in people giving back.”

Much of Stegink’s passion for working with and serving communities is attributed to the communities that embraced her at Calvin.

“The emphasis on community [at Calvin] was a huge thing that drove me to seek out the life that I’m currently living,” she said. “My two years in Project Neighborhood really changed what I was looking for in life—it was the first time I realized that you don’t have to go down one conventional path in life, that there are many ways to build community.”

Stegink’s journey is a testament to the fulfillment one finds when they follow God’s calling, rather than just a career path. “You have to be true to what you want to do and what you feel you’re being called to do,” she said. “I knew I wanted to farm, and it took me a while to come back to that truth, but I’m so happy I did. It doesn’t matter to me that it’s unconventional to go to college and not use that degree in a specific job because I’m so fulfilled in my work. That is what you hear at Calvin: to find the place where your passion meets the need of the world in some way—and I found it.”