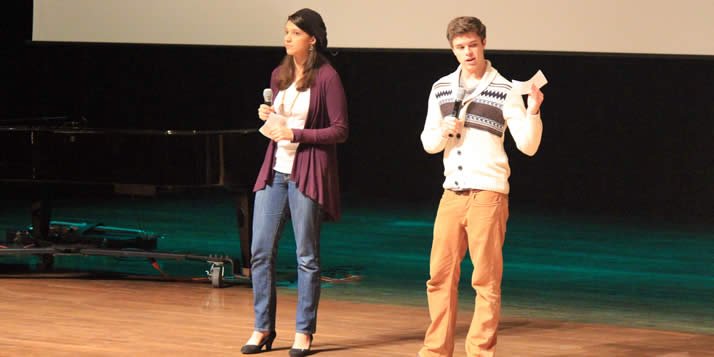 Two hundred fifty students from colleges all over the country descended on Calvin’s campus for the Faith and International Development Conference (FIDC) held Feb. 6-8.

According to Calvin sophomore Gabe LePage, who also served as co-director of the FIDC this year, the conference provided a forum for development organizations from all over the world and college students interested in development work to discuss global challenges from a faith perspective.

The conference featured a number of well-known speakers and panelists, including Rob Abueta, and Tara and Rob Cahill. This year, the FIDC also offered free nonviolence training, a first for the conference.

LePage cited the training as a highlight of the conference: “I’m just particularly interested in ideas about nonviolent resistance and dealing with conflict by kind of insisting on the dignity of your enemy,” he explained. “So the nonviolent direct training was training for that.”

The nonviolence training centered on a role-play called “theater of oppression.” The technique had attendees take on “unsolvable” problems by acting them out. If an attendee had an idea for how to solve a problem, he or she could jump up on stage and act it out within the scenario. At the end of the training, attendees split into groups and came up with nonviolent responses to contemporary global issues.

“I thought it was a good way to wrap things up,” LePage said. “We just talked about all these ways we can address problems in a nonviolent way, so it was good to think about what we can do now.”

“I just loved seeing everyone there … I love facilitating conversation, so seeing all of my friends able to interact with organizations that have internships and having conversations was great. To think maybe something will come out of that is really cool,” Hughey said.

For Hughey and LePage, those conversations are the result of nearly a year’s work. The pair, who both attended the conference last year, had been planning this year’s FIDC since last spring.

“It’s been about 5-10 hours a week [since the Spring], with the workload increasing as we got closer to the conference,” Hughey said.

Despite the heavy workload, both Hughey and LePage are glad they got involved with the conference and encourage other students to apply to be directors for next year’s conference.

Hughey said she was already looking forward to seeing what next year’s conference, which will mark the 10th anniversary of the FIDC, brings.

“I think we created a wave of community and connections this year, and hopefully next year’s conference can ride it,” Hughey said.