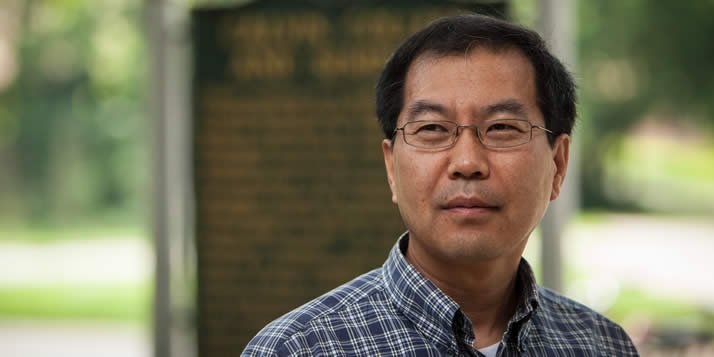 Won Lee has been teaching religion at Calvin for 17 years.

Medical missionary, musician and theologian Albert Schweitzer was Calvin religion professor Won Lee’s hero as a child. He initially planned to follow his boyhood idol into the medical field.

But Lee graduated from Yonsei University in Seoul, South Korea, with a biblical studies degree instead, setting him up for a career closer to Schweitzer’s work as a theologian.

Lee originally wanted to “save souls” as the pastor of a church. He planned to pursue that goal in America. Lee’s parents had already moved to California, where his father pastored a Korean church. He was able to secure a green card to join them after his graduation. Upon arrival, Lee enrolled in Princeton Theological Seminary’s master of divinity program.

A full-time internship at an American church following his second year in the master’s program challenged his pastoral ambitions.

“[After the internship], I felt I needed to know more about the Bible before I could be a pastor,” he said.

Instead of looking for a church after graduation, Lee enrolled in the PhD program at Claremont (Calif.) Graduate University. He set his sights on becoming a professor.

When Lee’s PhD program neared completion, he sent out letters with his resumé to a number of colleges.

Calvin College was the first to express interest.

“I went to interview even though I didn’t know anything about [Calvin],” Lee recalled. “I thought, when God opens a door, you have to be obedient.”

Calvin offered Lee a job. He took it.

Calvin’s reformed tradition proved a fit for Lee, who has been at the college for 17 years now.

“I can have a firm foundation [of faith], but still have the dialogue [at Calvin],” he explained. “I don’t have to sacrifice scholarship to be pious, but I don’t have to be a nominal Christian to be a good scholar.”

In his work on the Old Testament, Lee starts with the hermeneutics of texts: “Whenever I study a text, my first question is: what does this text reveal about God? The other questions are channeled through that [question].”

“[For Koreans], living together is comfortable. When you go to a Korean restaurant, everyone shares the dishes … It’s that concept of togetherness,” Lee explained. “So it’s natural for me to read scripture together [with others].”

Although Lee relishes the research, students are his favorite part of the job.

Lee is especially touched when he hears from past students: “After 10 years, I’ll receive an e-mail or a Christmas card from a student saying, ‘you may not remember me, but your class changed my life. I wasn’t a Christian before [taking it], and now I work at a church.’”

When Lee isn’t with students, he can often be found spending time with his two sons, though he says connecting with them can be a challenge.

“It helps me understand my boys,” Lee explained. “We can read [children’s books] together.”

Lee’s book, The Bible: A Library of Holy Writing, originally written in Korean, has been translated to Chinese. Because the book has an American publisher (Calvin College), getting it to students in China has been difficult, but a Chinese professor at Peking University—sometimes referred to as the Harvard of China—would like to use it as a textbook in one of his classes.