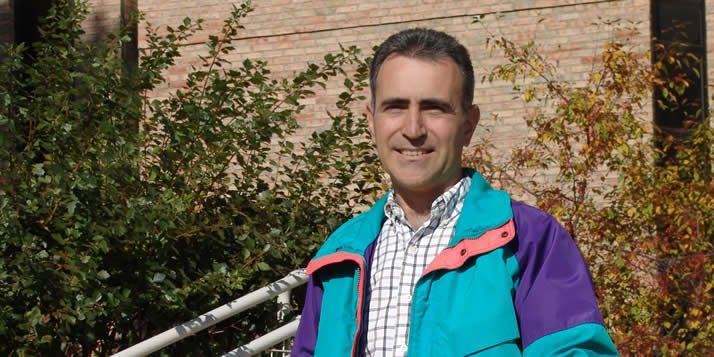 Da Silva recently completed four years of research on sleep apnea, a disorder characterized by pauses in breathing during sleep. “They [patients] aren’t aware of it, so they don’t remember,” he explained. In 2004, he administered polysomnograms (measurements of how the brain works with the heart) to patients at a hospital in Saginaw, Mich. “The literature has shown an increased risk of a number of problems associated with sleep apnea,” said da Silva. Through his study, he said, he hopes to improve diagnosis of the disorder.

Sleep research, however, has not always been da Silva’s area of interest. His career track is varied, and it did not begin anywhere near Calvin, Michigan or the United States.

Born in one of the world’s largest cities, Sao Paulo, Brazil, during a military dictatorship, da Silva had to make big decisions at a young age. “The generals decided to revolutionize education, so you had to choose a professional high school course,” he said. “I chose electronics because I was thinking I was going into engineering.”

He had bigger plans though. “What I really wanted to do is save the world. I was thinking well, (I’m) 17—I’ll save this world,” he said, laughing.

Saving the world, however, was not a college major, so da Silva considered a different path after high school: “I felt called to ministry. I wanted to go right away,” he said. His parents encouraged him to keep his dream on hold and attend college first.

The college system in Brazil at the time required students to take a test that would indicate the program in which they had the most potential. The test results would feed the students into separate colleges for each program.

For da Silva, the test had peculiar results, “I passed for psychology and not engineering,” he explained. “I didn’t even take high school psychology.” Da Silva sided with his test results and attended Metropolitan College in Sao Paulo to pursue an undergraduate degree in psychology. “I just thought psychology will help integrate my interest for helping people with some science, which is related to electronics.”

During college, da Silva was hired to work at a branch of Trans World Radio as a classical guitarist. “They started having needs in the area of programming, so I started doing programming.”

And there he stayed for 22 years, working as a programmer, translator and counselor for Trans World Radio, while finishing his undergraduate degree. Da Silva also acted on his ambition to go into the ministry and attended Biblical Seminary in Sao Paulo.

While working in broadcasting, da Silva encountered the restrictions of a military-run government, “All the programs were censored … .You had to send in all your scripts beforehand to the censorship department,” he said. “There were some frustrations … . They didn’t want you to say some things.”

There were pressures outside of the station, too. “You couldn’t just freely meet. If you wanted to do a rally of sorts, you had to send paperwork, and there was red tape,” da Silva said. “From time to time you would have to run from the police. To this day, I still get a little anxious around police. I grew up fearing the police because you always heard they can just arrest you for no reason given. If you don’t have your documents with you, you can just disappear. That makes you a little jumpy.”

Da Silva didn’t only run from police. “I remember running from tear gas,” he said. The incident occurred in a crowd of people in a subway; the police were concerned they were gathering for political reasons and wanted them to disperse. “We all laughed, but we were crying because of the gas. So it was kind of terrible and funny at the same time,” da Silva said.

Fate in the Caribbean

Though da Silva faced a few challenges with the military dictatorship, the station was not bothered too much because Trans World had a biblical, not a political, agenda. Da Silva’s work at the station brought him to the Caribbean Island of Bon Aire as a missionary. While there he encountered other Trans World missionaries: “I met this beautiful girl, who was there from Michigan,” he said, smiling.

Following their service in Bon Aire, she returned to Michigan and da Silva to Brazil. “So we were just sending letters. In those years, you didn’t have e-mail, and phone calls were really expensive,” he explained. “In one phone conversation, you could spend your whole month salary.” Da Silva admitted to making that mistake once.

The pen pals were married in 1987. He and Amy originally made a home in Sao Paulo. The couple had two children there, Lucas and Raquel. Da Silva went back to school for a master’s in social psychology from the University of Sao Paolo, finishing in 1996 and continuing to work for Trans World until 2000. “I felt it was time to end my ministry after 22 years,” da Silva said. He wanted to get his PhD abroad, and the family decided to move to Amy’s home state: Michigan.

“I always wanted to go to grad school and advance in my studies,” he explained.

From Central to Calvin

In 2000 da Silva went to Central Michigan University to pursue his PhD in experimental psychology. In 2004, da Silva sought employment at several Michigan colleges. He received an offer from Calvin, and the college seemed like the right fit. “When I read the materials that Calvin was publishing, and I talked to people and saw how interested the college is in integration (of faith and learning), I thought, ‘Wow, that is always what I wanted to do.’”

Psychology department chair Scott Stehouwer, thinks it is the right fit, too. “Sergio brings to the department and to the college a wealth of experience, especially cross-cultural experience. He is a fine scholar, and his teaching consistently reflects his strong Christian faith and his commitment to the goals of Calvin College.”

Da Silva began teaching that same year and finished his PhD in 2006. In the past few years, he has been researching several topics, including factors that influence automobile driving behavior and affective sounds. “If you hear a sound on your right side or left side, you interpret the sound differently,” he explained the latter.

Outside of his varied career, da Silva enjoys music, “I like … Tchaikovsky, Bach, some very obscure musicians, fusion musicians. So obscure that I forgot the name,” he joked.

Da Silva plays the guitar at Cascade Fellowship Church. Not only is he musically inclined, but he plays soccer weekly.

Though da Silva began his journey in Brazil, he is happy to have ended up at Calvin, “Americans are very receptive,” he said. “I got my education here. I am very grateful for the way I was received here.”

Along the way, his perspective has remained constant: “I always wanted to integrate everything I’ve learned … with my faith because it is so central to me.” 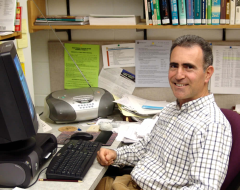 Little-known fact
Flew an airplane once with no prior experience