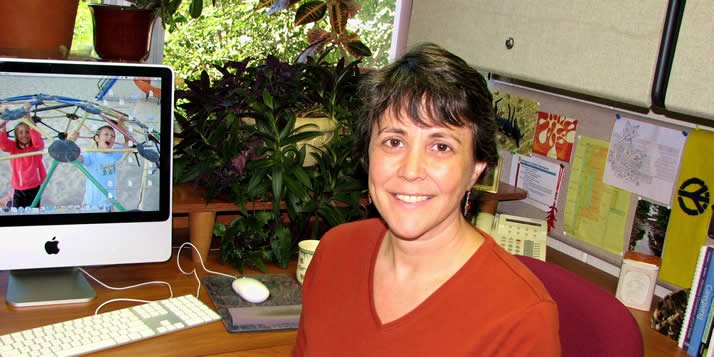 A closer look at professor of philosophy Ruth Groenhout.

College freshmen are notorious for quite a few things. One is changing their area of study. Professor of philosophy Ruth Groenhout was no different when she was a Calvin student.

Groenhout came to Calvin as a student in 1980. Her love of the sciences impelled her into the pre-medicine program.

Plans changed, though. Groenhout enrolled in an introductory philosophy course with then-Calvin professor Nicholas Wolterstorff. Almost immediately, she discovered, philosophy fit. “The logical structure appealed to me …,” Groenhout said. “There was no question, once I took a philosophy class—philosophy was the right place for me.”

Groenhout did not completely abandon her love of science; she pursued a major in both philosophy and pre-medicine.

She attributes her penchant for philosophy not only to Wolsterstorff’s class, but to an international upbringing. From the age of four up until high school, she lived in Oaxaca, Mexico, where her parents worked as missionaries. Groenhout’s time there forced her to contemplate the basic structures of human life:

After finishing up her dual degrees at Calvin in 1985, Groenhout had to make a decision about the future. “I decided to go to graduate school because I loved philosophy and couldn't think of something I wanted to do more than study it for the next several years of my life,” she said.

The University of Notre Dame in Ind. was Groenhout’s pick for graduate school because of its reputation as a good place for Christian philosophers, among them former Calvin professor Alvin Plantinga. Also, its Midwest location was attractive to Groenhout and her husband Todd, (whom she married in 1985) because both of their families lived in Michigan.

Groenhout had three of her four children while studying at Notre Dame. “It was a lot of work,” she explained. She completed her dissertation on ethics in 1993 and began teaching at Spalding University in Louisville, Ky. Groenhout stayed for a year and then started a two-year appointment at Southwest Missouri State University in Springfield, Miss. Groenhout is grateful that her husband’s line of work, carpentry, affords them the opportunity to move easily.

In the back of her mind, however, Groenhout, wanted to return to Calvin as a professor. The family’s journey back to Michigan in 1996 was instigated by a loss; Todd’s father had passed away. They came back to Michigan for the funeral and stayed to be close to family. Groenhout began teaching at Calvin in the fall of 1996.

One of the staples of Groenhout’s scholarship is gender studies. Though her graduate research did not involve the philosophy of gender, she thinks that her study of it was inevitable. Studying gender is simply her attempt to understand some of her own experiences.

Groenhout pointed out this misunderstanding: “All gender studies classes are not just about women … Men have a gender too,” she said. “Sometimes people think it is more ideological than it is. There is lots of room for exploration—different answers and disagreement.”

Calvin professor of philosophy Kelly Clark described Groenhout as a conscience for the philosophy department: “She reminds us of things we don’t want to be reminded of. But she does so in a gentle, kind way. She takes courageous and sometimes unpopular moral stands, and she is willing to stick her neck out.”

She is the first female philosopher in Calvin’s philosophy department to receive tenure.

For Groenhout, engaging students in discussion is rewarding, whether it is about the philosophy of gender, ethics or philosophical anthropology. “Students actively try to make sense of their lives …,” she said. “Philosophy, when it’s done right, makes sense of their lives.”

To retreat from philosophical quandaries, Groenhout quilts. There is an intricate quilt thrown over a chair in her office. Always an educator, she taught a quilting interim in January 2007. Groenhout also likes gardening: “I like getting my hands dirty,” she said.

She pays homage to her childhood in Mexico by making trips back to that country whenever she can and regularly cooking up Mexican cuisine.

“I love being able to ask substantive questions about meaningful issues,” Groenhout said. “Things like what it really means to live a good and happy human life.” 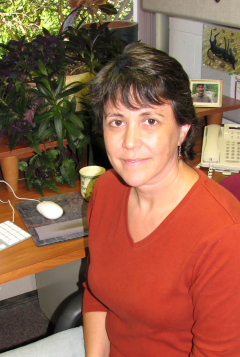 Little Known Fact
Her family will be moving into a geodesic dome in the fall of 2008.