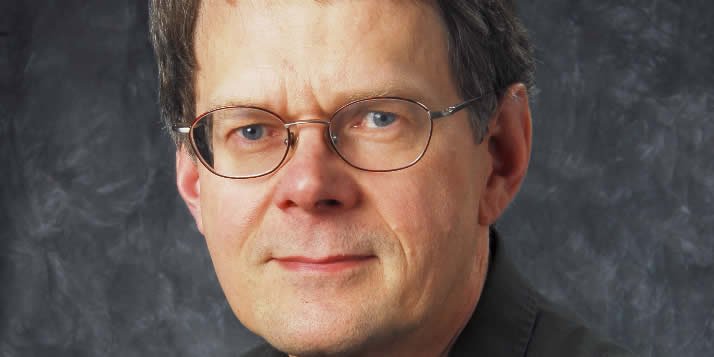 Randall Bytwerk's Nazi propaganda archive is the number-one hit-getter on the Calvin website.

Randall Bytwerk is a professor of communication arts and sciences (CAS).  He is also the creator and maintainer of the German Propaganda Archive, the number one hit in a Google search for "Nazi propaganda”—a hit that even appears above Wikipedia’s entry on the subject and draws in over a million visitors every year.

"Often people will call up or send me an e-mail and ask, ‘Can you send us a high-definition copy of this image or that image?’” Bytwerk said. “It results in interesting things. Last year, for example, I was involved as an expert assistant in a $400,000,000 lawsuit—an attorney for a Holocaust art-claims case found my website. ... The point is, it provides an international visibility, which has all kinds of interesting consequences.”

Bytwerk is interested in Nazi propaganda because of the all-encompassing totalitarian mindset that the Nazis embraced. Nazism, he said, was more like a religion than a simple political standpoint.

"It’s like Abraham Kuyper’s ‘every square inch,’” Bytwerk explained. "Essentially, the Nazis made the same point—every aspect of the world, every aspect of life ought to depend on Nazi ideology ... Nothing was outside of the worldview of the party. For instance, one of the articles that I’ve translated on my website is an article from a magazine for Nazi officials, and it was on, of all things, interior decoration ... ,” he said. “So if interior decoration falls under the purview of the party, there’s not much that doesn’t.”

Bytwerk was born and raised in Grand Rapids. In high school, he enjoyed biology, so he came to Calvin College as a prospective biology major. “But then I ran out of enthusiasm in my sophomore year for biology,” Bytwerk reminisced. “Then I went through German, history, philosophy—took a lot of courses in all of those.” During his junior year, Bytwerk said, he “blundered into the area of communication,” which provided him with a major that could tie all those interests together.

Bytwerk enjoyed communications so much that he decided to continue his studies at Northwestern University in Illinois. “I decided scholarship and education was actually rather interesting. … I said, ‘I’ve got to keep doing more of this. I rather like it, and I might even get paid for it,’” Bytwerk said.

Upon receiving his PhD in 1975, Bytwerk served as an assistant professor at Southern Illinois University, where he became a tenured faculty member in 1979. And in 1985, he returned to his alma mater as a professor. “The more I saw of the rest of higher education, the more attractive a good liberal arts college looked,” Bytwerk said.
Every semester, Bytwerk teaches “Persuasion and Propaganda,” a class that allows him to introduce students to his area of expertise.

"The most interesting part of the class was studying World War II propaganda, particularly the materials used by the Nazis,” said Lindsay Makowski ’10, one of Bytwerk’s former advisees.

After Makowski took the class, she traveled with an interim class to study in London and Paris, something Bytwerk encouraged her to do. "At the Imperial War Museum in London, various newspapers, posters and books used by the Nazis were on display,” Makowski said. “It was so enriching to have an education experience come full circle like that. There's a good chance I wouldn't have traveled without Professor Bytwerk's encouragement, and I'm so happy I went.”

When teaching, Bytwerk sets up a motion detector at the start every class; latecomers are fined a quarter, which goes into a fund to buy the class donuts. "The motion detector that I remember most was a frog that “ribbeted” when someone walked in late,” Makowski said. "And donuts were purchased for our class once or twice—even though no one really deposited the money when they were late.”

Bytwerk and his wife Sharon, a spiritual director in Calvin’s office of Christian formation, enjoy traveling. When he was chair of the CAS department, the couple would take a break from academia and "abscond to New Zealand every January,” Bytwerk said. The couple has a son, David, who is currently pursuing a PhD at Oregon State University.

When he’s not travelling or teaching, Bytwerk enjoys good books. “I’m of the professorial disposition to read all kinds of things,” he explained. “I’m a P.G. Wodehouse fan … The Jeeves and Wooster stories are my favorite, followed of course by Lord Emsworth.”