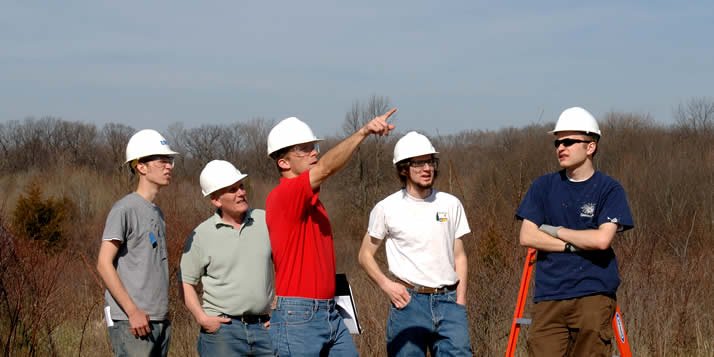 “What most people don’t understand—it (engineering) is not science. It is extremely creative work that is different from science in that you create the world you inhabit,” Heun explained. “Engineering is a performance. There is a beginning, middle and end. Within the conventions, you can be creative, like an actor, like a painter.”

Engineering: the “Wright” thing for him

Heun first became interested in engineering as a young child in Portage, Mich. “The genesis of it was when I read a book about the Wright brothers,” he said. His interest evolved into his study of engineering with a mechanical concentration at Calvin in 1985. “I like unlocking how stuff works,” he said.

In 1989, Heun graduated and pursued his PhD in mechanical engineering at the University of Illinois, Urbana-Champaign. One of his primary research interests there was the impact of refrigeration systems on the atmosphere. At the time, chlorofluorocarbons (CFCs) were in profligate use by industry as refrigerants, and they were depleting the ozone layer. Heun estimated that it took 10 years to eradicate the use of the damaging compounds. “We were part of phasing out CFCs,” Heun remarked.

Heun was also on a JPL team that designed a balloon apparatus intended to fly into Martian atmosphere. It was named the Mars Aerobot Balloon System (MABS). Other teams were crafting rovers and satellites for NASA’s prospective mission to Mars. “If you are a rover, you are a short distance from the ground, but you can’t cover much territory. If you are a satellite, you are too far away… . (The) balloon,” he explained his team’s design, “is a compromise.”

Late nights in the California desert were not uncommon for Heun. At times, he was testing and chasing balloons for nearly 24 hours—from 5 a.m. until 2 a.m.

One year out of graduate school, Heun was pitching the MABS design to NASA. However, NASA decided to use rovers as the primary means to explore Martian terrain. “For me it was a tremendous experience to make a proposal, a presentation, in front of the highest decision-makers at NASA.”

Heun left JPL in 1997 to work for the Global Aerospace Corporation in Boston. At GAC, Heun supported NASA's scientific balloon program which has made several important scientific discoveries over the years. One such discovery came from the Boomerang mission led by the California Institute of Technology and the University of Rome which, in 1998, took data indicating that the universe is flat and will expand forever.

In 2002, Heun came across a Calvin engineering newsletter for alumni, which had an advertisement for a position in the engineering department. The advertising tactic was a John Calvin version of Uncle Sam, imploring, “I want you!”  The ploy worked, and Heun began teaching at Calvin in 2002.

The transition from industry to classroom was a fairly smooth one for Heun. “Every place I’ve ever been, I've done teaching. Not in a classroom, but among peers,” he said. His previous places of work included a mix of Christian and non-Christian colleagues; he described that as an excellent experience, but he was ready for something else: “I was hoping and longing for something deeper—to have those conversations about what it means to be a Christian and an engineer.”

In Feb. 2007, Heun’s collaborations with his students attracted the attention of Governor Jennifer Granholm. The governor attended a seminar on wind energy organized by Heun’s “Thermal Fluids System Design” class, where the class presented their plan to erect a demonstration wind turbine near the college’s Gainey Athletic Fields. They erected the turbine in April, 2007.

Five years into his life as a professor, Heun has developed a philosophy for teaching engineering. “My strategy is to educate students for their lifetime,” he said. “When I look forward in the 60 to 80 years, I see significant issues with energy.” Heun considers it rewarding to invite students to contemplate serious issues.

In 2009, Heun will be on sabbatical in Cape Town, South Africa at the Cape Peninsula University of Technology and Stellenbosch University. There, he will teach courses on refrigeration and renewable energy. Heun will be traveling with his wife, Tracy, whom he married in 1990, and their two small children. Catherine is two, and Mark is eight.

As of late, Heun has been dabbling with photography as a hobby. “It causes me to see the world in a new way,” he explained. Heun and his family also enjoy spending time outside biking, running and swimming.

Heun reflected on his role as an educator: “It’s an honor to participate in shaping hearts and minds of future kingdom servants.” 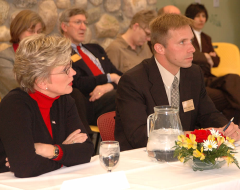 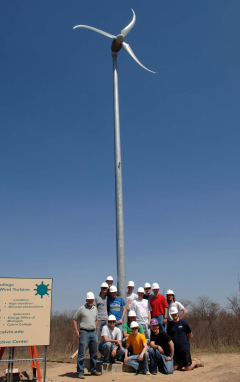 Heun and class with their demonstration wind turbine