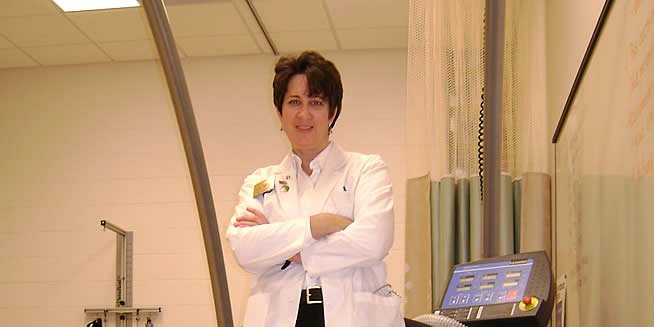 “The lab is really Walton’s thing,” said Roy Zuidema, Calvin’s director of Campus Wellness. “She worked really hard on that, and it’s fun to see how excited she is about it. She’s very passionate and dedicated to teaching exercise science.”

The primary purpose of the lab, Walton said, is to help students understand the role of physical activity in both physical and spiritual wellbeing: “Students learn how to assess another’s fitness, develop an individualized exercise prescription and counsel clients regarding their exercise needs.”

But the new facility isn’t just good for exercise science students; it’s good for the professors, too. A modern, well-equipped lab will allow faculty to undertake research projects from other institutions, both local and international, Walton said.

When she was in fifth grade in Naperville, Ill., Walton was one of 60 pupils chosen district-wide to enter an academically accelerated college prep program.

“I never thought I was very bright until my fifth-grade teacher elected me into this honors group,” said Walton. Prior to this opportunity, she had considered herself more adept athletically than academically. “It was a boost to my developing sense of self-esteem to think that I might be as competitive in the classroom as on the tennis court,” she said. “It was a real encouragement.”

After graduating from high school, Walton chose to study veterinary science at Colorado State University, but a single class caused her to switch majors. “When I took a class in comparative anatomy, I decided I wanted to study humans.” she said. “I played volleyball on a scholarship at the time, so I switched to sports management.”

Because she had an internship in corporate wellness when she was a senior at CSU, Walton decided to attend Ball State University, which had one of the best graduate programs in corporate wellness. “I got into cardiac rehab there,” Walton said, “and that’s what I went into after I got my master’s.”

Walton also became a Christian during her time at Ball State after a friend recommended that she read C.S. Lewis’ Mere Christianity. “I decided I wasn’t getting enough rest,” she explained, “and I needed to get some downtime. Ball State has a nature preserve, so I would go to this big, old oak tree and read. I grew up in the church, but it just hadn’t occurred to me before that salvation could be for ‘good’ people too.”

Walton named the oak tree Clive, and she still has an acorn from it.

Motherhood and a PhD

After Walton obtained her master’s, she and her husband Mark moved to Washington, D.C. “Mark and I tried for four years to have kids,” Walton said. “I went to the doctor, and he said that my husband and I just weren’t compatible. So since I couldn’t become a mother, I applied for my PhD in exercise physiology.”

At the end of her first semester, however, Walton’s health seemed to take a turn for the worse. “During finals, I just felt tired and crappy,” she said. “But then it turned out I actually was pregnant! It was like God said, ‘Go ahead and make your own plans—I still have stuff in store for you.’”

After Walton finished her PhD, the family (which now included daughter Molly) moved to Grand Rapids, and Walton got a job with the cardiology department at Butterworth Hospital, where she worked three-quarters of the time. “I got paid all year, but I only worked when school was in session. It was the best job ever for a mother! I was only about six months into that arrangement when a voice went through my head that said, ‘Call Calvin College.’”

While Walton had heard of Calvin, she knew next to nothing about it. But she heard the voice every day that week, so on Friday she made a compromise. “I didn’t even want to teach, and I didn’t know whose voice it was, so I e-mailed instead of calling and just asked if there were any openings. The chair said no.”

On Monday morning, though, Walton was greeted with a voicemail requesting her to send a transcript, a resume, a list of classes she could teach and a pastoral letter of recommendation to the college by noon. “In a week’s time, I was interviewed and offered a job,” she recalled.

Walton’s favorite thing about Calvin is the college’s commitment to faith-based learning. “When I went to college, I wasn’t a Christian, so it didn’t even occur to me that you could integrate faith and learning,” she said. Her colleagues agree that her teaching style really reflects her beliefs. “She has such a strong faith, and she’s so eager to share it with students and colleagues,” said Zuidema.

At Calvin, Walton has been involved in many things, from directing Healthy Habits (Calvin’s staff and faculty wellness program) for seven years to teaching students how to cook over interim.

Currently, Walton is researching how food and the Christian faith should interact. “God wants meals to go beyond just nourishment,” she explained. “We should take time to sit with each other and share. But we’ve lost that. We eat alone, we eat crap and we eat fast.” As part of her research, Walton regularly eats with her students. “The research has been very strong that relationships between students and a professor are greatly improved by just two meals together,” she said.

Walton also intends to start a collaborative research project with fellow HPERDS professor Nancy Meyer. “Dr. Meyer and I are both interested in conducting long-range physical activity research in aging populations and hope to commence a pilot study in seniors (age 55 and above) in the spring of 2011,” she said.

Walton believes that she is appreciated at Calvin precisely because she is a jack-of-all-trades. “I’m cross-trained, I guess,” she said. “In an age of specialization, we really value generalists in our department.” 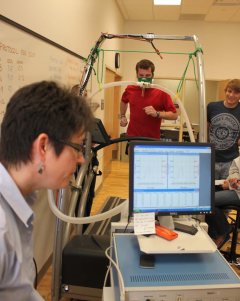 Little-Known Fact
Walton is currently learning to play the electric bass with the help of YouTube.