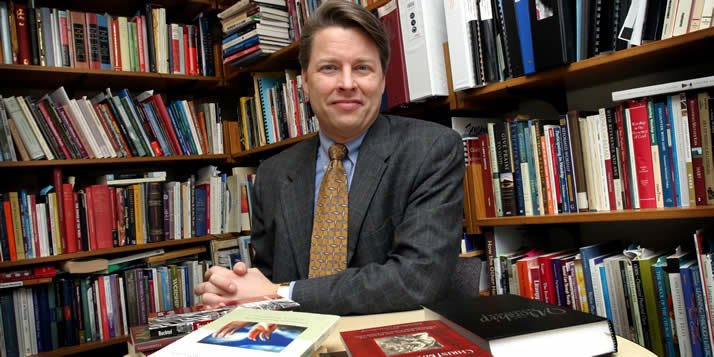 “It is impossible for him to do anything mediocre-ly,” said Calvin chaplain emeritus and friend Dale Cooper.

Witvliet has a closet talent for mathematics. He is the father of four—with triplets in the mix. He holds five degrees from four institutions. He teaches in two Calvin departments and is the director of one groundbreaking institute.

His wife, Charlotte, organized a birthday party, and though the event was intended to commemorate his major achievements, the attendees—Calvin and CICW staff—spent some time mimicking Witvliet’s style of talking and gesturing via a PowerPoint presentation.

An inability to be mediocre

At the end of the celebration, they sang his praises: “My respect for him continues to grow,” said coordinator of worship for Calvin’s chapel Cindy de Jong. “I am so impressed with how he is able to be this amazing director of the institute, and he also can be quite pastoral with his staff in some difficult situations—almost shepherding them.”

“It is impossible for him to do anything mediocre-ly,” said Calvin chaplain emeritus and friend Dale Cooper.

Yet he is not fatigued or bigheaded said Cooper: “Here is what makes John Witvliet humble. Number one, he knows he is loved by God. And he knows everything he has is a gift.”

His upbringing was a bit of a Midwestern rove. Born in Holland, Minn., the son of a pastor, Witvliet (and family) moved three times before he was 18:  Holland, East Martin and Jenison, Mich.

In high school he played French horn, organ, piano, and sang and conducted, all of which resulted in “a real love for the process of music making,” Wivliet said.

In 1986, upon graduation from high school, Witvliet decided to make a move of his own, to Calvin College. His religious background influenced his area of study: “Worship was of central importance in each of the communities I knew growing up.” Witvliet explained. “And that is true for Christians in many traditions. For many people, when they say they are going to church, they mean they are going to worship.”

Synthesizing his passion for music and church, Witvliet chose a major in vocal performance at Calvin. During the summers, he worked at Camp Tall Turf in Hesperia, Mich., an experience he called formative: “Part of my interest in worship was the vitality of worshipping with 150 kids in the middle of the woods for four summers.”

After graduating from Calvin in 1990, Witvliet knew exactly what he wanted to do: “I knew I loved the academic life at Calvin—a lot,” he explained. “I really wanted to go to grad school.” He wanted to study the historical and theological implications of worship, which was not an established academic field.

Consequently, Witvliet had to get creative with his graduate studies: “I applied for grad school in four different fields in the same year. I applied in music, philosophy, religious studies and theology. Every one of those fields has something to do with worship,” he said.

Calvin Theological Seminary was Witvliet’s first stop. He earned a degree in theological studies, while also and working as the coordinator of worship for the college chapel. He next attended the University of Illinois at Urbana-Champaign for a speedy one-year master’s degree in conducting.

There, Witvliet assisted in conducting the university’s Men’s Glee Club;he was in charge of 110 college-aged males with what he described as “fraternity-style energy.” He remarked on that experience: “They would sing all these rah-rah fight songs, a little different from choirs at Calvin College.” In 1993, Witvliet began his PhD at Notre Dame in theology and worship.

After completing his alternating educational track, Witvliet was offered a job at Calvin as a professor of music. He was also encouraged to spearhead a new worship institute. “I always thought it would be one wonderful possibility,” he said of returning to his first alma mater.

When Witvliet was a student at Calvin in the ’80s, there was no institute of Christian worship. Yet he had shown promise as a worship director even back then, Cooper recounted. Witvliet, along with fellow sophomore Randall Engle (now a Christian Reformed minister) was instrumental in organizing one of the early symposia devoted to Christian worship at Calvin.

Today, the CICW organizes 12 to 15 conferences annually, and the largest of these events is the Calvin Symposium on Worship, held every year in late January on the Calvin campus. Worshipers and worship leaders gather at the symposium from all around the world to worship, to learn about worship and to renew their commitment to the full ministry of the church.  This past January, 1,600 people from 34 different countries attended the symposium.

The CICW has also prospered in other ways. In the 10 years of its existence, the institute has given more than 450 grants to congregations and worship groups, welcomed over 15,000 guests from 40 countries to its conferences and training events and produced more than 30 books. This past January, the institute was awarded a $7 million grant from the Lilly Endowment to continue its many endeavors.

Witvliet has observed significant growth in the entire area of worship study. During his student days, institutes like the CICW were rare, and very few people taught in the field; now, he approximates, there are a couple of hundred worship scholars and several related institutes operating in North America. Witvliet attributes part of the expansion to ever-changing worship styles: “Eleven years ago, there was a larger divide between churches who just did traditional worship and those who did contemporary worship,” he elaborated.

As director of the institute, Witvliet writes proposals and grants, consults with churches on their worship styles and speaks at various venues throughout the United States and Canada. Yet despite his demanding schedule, he still finds time to teach courses in the Calvin religion and music departments, as well as at Calvin Theological Seminary.

“He is masterful at pulling together so many different ideas and bringing together diverse groups of gifted people, creating wonderful resources for churches around the world,” de Jong said.

Home is just as lively for Witvliet. He and his wife, Charlotte, were married in 1991. She is a professor of psychology at Hope College. Witvliet estimated that on a weekly basis, at least three people ask him how they cope with The Rivalry, and his usual response is, “We root for Hope College in football and Calvin College in basketball.”

Besides managing their careers, the couple manages four young children (triplets included). Witvliet often jokes, “It was one thing to write your dissertation on the Trinity, but being a parent of triplets is quite something else.” The family loves to visit South Haven, a place they deem their “beach spot.”

Witvliet’s passion is easy to pinpoint. “Worship is such a life-giving, sustaining, nurturing practice,” he said. “Worship is a place where we encounter people very different from ourselves—in terms of interests, abilities, socioeconomic background, and, increasingly, different cultures.  Above all, it is a place where God works to nurture and challenge us and form us as disciples and children of God.”

Selected Publications
The Biblical Psalms in Christian Worship: A Brief Introduction and Guide to Resources (2007)