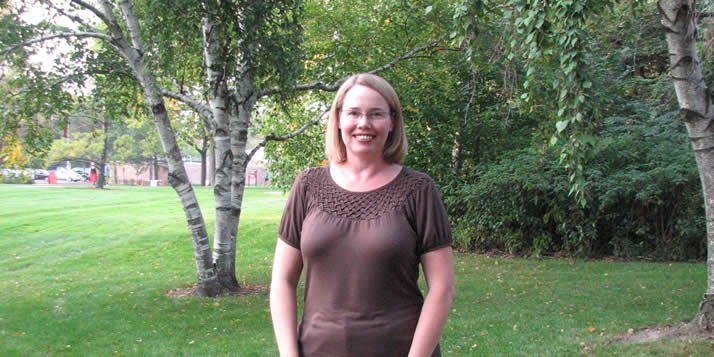 Maybe it is no surprise that Calvin professor of art, Jennifer Steensma Hoag got into photography; she was born in Rochester, N.Y., the headquarters of Eastman Kodak.

Maybe it is no surprise that Calvin professor of art, Jennifer Steensma Hoag got into photography; she was born in Rochester, N.Y., the headquarters of Eastman Kodak.

But 100 head of Angus beef cattle are really to blame.

“I grew up on a farm,” said Steensma Hoag. “I remember having an instamatic camera in 4th grade. I took pictures of the farm. That is when I fell in love with the medium.” On her journey to Calvin, Steensma Hoag admits: “I tried so many things.”

Steensma Hoag came to Calvin as a student in 1982. By her sophomore year, she had exhausted the photography classes taught by professor of art emeritus Robin Jensen and had transferred to Shepherd University in W.Va., where she earned a bachelors degree in photography.

Looking for a career in photography

In 1986, after graduating she was dissatisfied with simply throwing herself into one of the jobs available in photography. “If you are in Detroit you are doing cars,” she explained. “If you are in Grand Rapids, it’s furniture.” Steensma Hoag was interested in working on the creative end of photography, rather than being a lighting technician for a photo director.

Although her dream job in photography was as-yet unattained, Steensma Hoag knew she was called into the field: “There must be a way to make it work,” she reasoned.

Off to grad school

Steensma Hoag made it work by attending the premiere graduate school of photography at the time: Rochester Institute of Technology. She paid the bills by working as a secretary in an oncology unit at a hospital.

Following graduation in 1992, she managed an archive of the first 35- mm cameras at Rochester’s municipal archives of public works. Her newly acquired degree also afforded her opportunities, such as lecturing on photography at the New York Public Library.

Back at Calvin, filling big shoes

While she was working at the archive, her mother saw an advertisement in The Banner for an art professor at Calvin.  She was uncertain whether she would get hired or if it would work out. But nowadays she regards the encounter as providential.

It was Jensen’s retirement that brought Steensma Hoag back to Calvin—as his replacement. After landing a one-year appointment in 1995, she reasoned, “I’ve got the degree, why not try it and see if I like it.” After a series of year-long appointments, Steensma Hoag was confident that Calvin was a perfect fit.

“I want to bring all the different things I’ve tried into my teaching,” she explained. “I want to teach students to take better photos technically and conceptually. … Give them a vocabulary to talk about images.”

Her predecessor is confident she can do just that: “She is well versed technically,” Jensen said. “She has done a very good job.”

Head of the “photography department”

Steensma Hoag calls herself, “Miss Photo” because she is Calvin’s only photography professor, teaching three courses. There is no photography major at Calvin; students across the disciplines enroll in her classes. “Makes the classes really exciting to have all those approaches,” she said. “English majors bring their ability to show a narrative. Philosophy majors bring theoretical approaches to photography. Film majors can compose a story within a frame.”

One of the highlights of Steensma Hoag’s work at Calvin was the opening of 106 S. Division, Calvin’s art gallery in downtown Grand Rapids. The building is part of the community’s efforts to revamp Division Avenue through live-in work spaces for artists. The gallery hosts several events, including exhibits of her colleagues’ and students’ work.

Another pivotal experience in her career was her 2007 exhibition, “The Nature of Invasion.” The piece was a commentary on urban sprawl and featured photographs of deer in unexpected environments, like a city park or a hood of a car.

In 1995, Steensma Hoag married her husband, Paul, who works for an art gallery and manages a historical print collection. The couple has a daughter, Phoebe, who is six. Steensma Hoag admits to being one of the few parents who would shout, “Yeah!” if their daughter decided to be an artist. The family regularly attends art shows and museums. She estimates that Phoebe has seen more art, at six years old, than she had when she was entering college.

“At this point I’ve been here fifteen years,” she explained. “My students go on to things that are so diverse. They still stay in contact with me. It is nice to have that connection whether it is celebrating their accomplishments or making suggestions—I like that part of it.”

Selected publications
"The Nature of Invasion" (2007)

Little-known fact
Orders a hybrid soy/skim-milk chai latte that other customers at a local coffee shop liked so much, it became a popular drink