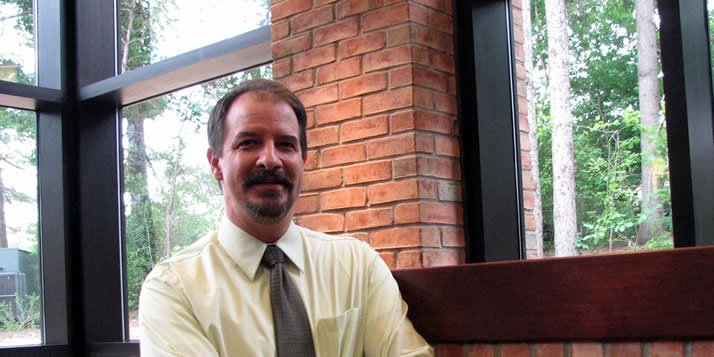 Lawyer turned professor is a common enough story. But Calvin professor of sociology Jeff Tatum’s story is anything but common—he was not supposed to survive a traumatic brain injury he got as a toddler.

Lawyer turned professor is a common enough story. But Calvin professor of sociology Jeff Tatum’s story is anything but common—he was not supposed to survive a traumatic brain injury he got as a toddler.

During a backyard baseball game, Tatum was hit in the head by a ball. Doctors removed a portion of his brain and told his family he would never lead a normal life. Despite the bleak prognosis, Tatum made a full recovery. Jill Tatum, his wife and a Calvin biology professor, often jokes, “They surgically removed the ethical part of his brain, so he could be a better lawyer.”

Growing up in the racially divided, blue-collar Texas town of Odessa, Tatum developed an interest: “I liked studying people and observing groups and who is in and who is out.” This interest eventually translated into the study of sociology at Texas Tech University in 1980. Tatum thinks sociology has explaining power: “It seemed like when I studied sociology ... I could see connections and patterns,” he said. “I felt like I could read a newspaper more intelligently. I could see news stories not just as what happened that day, but as examples of bigger things.”

A good mix: sociology and faith

Tatum did not grow up as a Christian, and, in his sophomore year of college, he became serious about the faith after he joined a “dynamic” student ministry on campus. When he began participating in the ministry there were two dozen students involved. By the time he left, 200 students participated weekly and another 1,000 attended various ministry events.

“About the time I was becoming serious about my faith, I was attending sociology classes,” he remarked. “So I would be doing the book of Isaiah in the Bible study, and then I’d be reading about harsh patterns in our own society. It seemed to me that sociology and Bible studies go very hand in hand.”

Following graduation in 1983, Tatum decided that law school at Texas Tech was a good extension of his sociology major. “It seemed liked sociology identified problems,” he explained, “but law was most likely to give me the tools to do something about those problems.”

From the get-go in law school, Tatum noticed something: “I realized that in the first week, you could probably get a PhD in the sociology of law, and that is what I have been doing ever since then,” he explained. “I’ve been bouncing back and forth between law and sociology.”

After law school, Tatum and Jill moved to Roswell, N.M, where he joined a firm of 20 attorneys. But in the back of his mind was the desire to continue studying sociology and maybe teach. He told himself he would stay at the law firm five years and see if the itch passed. “I had made partner in my law firm, but the desire to go back never left,” said Tatum.

Moving on from the firm

Tatum resigned his partnership and the family moved to Charlottesville, Va. so Tatum could pursue his PhD in sociology from the University of Virginia. By then, his family had grown to five, and he and Jill had three sons: Atticus (named after Atticus Finch from To Kill a Mockingbird—one of Tatum’s favorite novels) Ethan and Keeton.

At the University of Virginia, Tatum studied euthanasia laws. More specifically, he continues to explore how biomedical ethicists draw the lines of right and wrong and how those arguments play out in the courtroom. Tatum is drawing from a large pool of cases: every appellate right-to-die case from 1990-2006.

Moving into the classroom

Since then, Tatum has been up to quite a bit. As one of Calvin’s pre-law advisers, he has 110 students on his list and meets with those who need anything from vocational advice to help preparing for the LSAT. Tatum has taught a variety of courses, including an upcoming interim course that revolves around his research called, “Key Cases in the Right to Die.” He also teaches a course about the sociology of deviance and said that students from local Kuyper and Cornerstone universities attend the class: “It’s always funny that students come to Calvin for their deviance training,” he joked.

Family life is flavorful for Tatum. “Jill is an extraordinarily good cook. It is almost her form of art,” he remarked, attributing his wife’s culinary skills to her roots in the southwest United States. The family makes it a priority to have dinner together at least five nights a week, even if it means that they sit down at the table at 9 p.m.

The couple met at Texas Tech; they wrote a term paper together for a class and started dating. “I always tell my students that group projects can change your life,” he said. “Be careful who you pick as a partner.”

Tatum lives by the adage, “Manage your schedule or else it will end up managing you.” The family manages their time between annual pilgrimages to the southwest, swimming and discovering new music. These days, Atticus has Tatum on an “Incubus kick.”

Tatum admits he teaches sociology for the same reason he studies it. “I like to help students see the patterns that influence their lives,” he explained. “I think there are really high social pressures, but as you become aware of them it becomes easier to decide to go along with them or chart your own course.”

Selected Publications
"Compassion of Trial: Movement Narrative in a Court Conflict over Physician Assisted Suicide” (2002)
"A Bibliographic Essay on the Body” (2001)

Little-known fact
His hometown, Odessa, Texas, was the subject of a film, Friday Night
Lights.