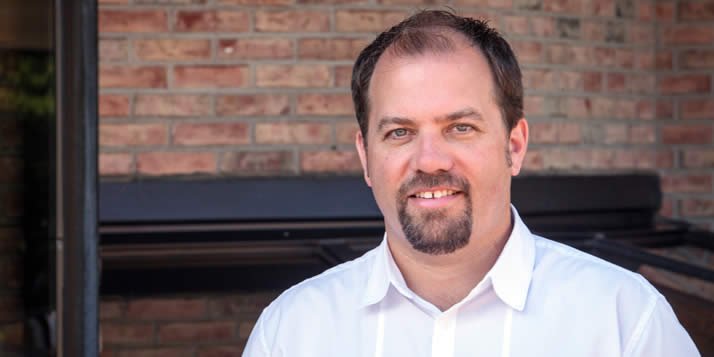 At five feet, six inches tall, Calvin philosophy professor James K.A. Smith is a few inches shorter than the average football player. Many are surprised to learn he was team captain in high school. He admits there wasn’t much competition for the position in Canada, where he grew up.

Smith describes his childhood in Embro, Ont. as “very working class.” His parents never graduated high school. He was the first member of his family to go to college.

The college he chose—Emmaus Bible College in Dubuque, Iowa—reflected another difference between him and his family: he had become a Christian.

A romance and religion

It all started with a girl.

When Smith began dating Deanna the summer before senior year, her family started encouraging him to become a Christian. By October, he was convinced.

“It was their love and care that struck me as much as the Gospel,” Smith reflected. “Deanna’s family loved me into the kingdom.”

“She wasn’t exactly walking with the Lord at the time,” he explained. “After all, she was dating me!”

Her disillusionment with Christianity could have spelled doom for their relationship.

“It was either going to be that we broke up or that she came back to the Lord,” he said.

She came back. They married two years later.

A love for learning

At the time of his marriage, Smith had already begun what would amount to ten years of higher education, culminating with a PhD in philosophy. After completing his education, Smith elected to teach others as a professor, eventually landing in the Calvin philosophy department.

Calvin’s Reformed approach was a familiar one for Smith. He attended another school in the same tradition—the Institute for Christian Studies—for his master’s degree. The experience shaped him spiritually.

“[At the institute], I studied Abraham Kuyper, and I was really influenced by Alvin Plantinga, so even though I didn’t grow up Reformed, coming to Calvin was kind of like an intellectual homecoming for me,” he said.

Although Smith knows his Reformed theology, he’s still learning new things as a professor: “I love teaching things I don’t know. I kind of get to keep being a student. I never teach a course the same way twice.”

Sometimes ideas fleshed out in classes appear in his scholarship.

“In a way, teaching is a laboratory for research because I apply the ideas developed in the classroom to my work,” Smith reflected.

That body of work is vast. Smith’s writings explore topics ranging from the value of ancient religious practices, to the relationship between science and religion. He’s currently working on a trilogy of books about liturgy and culture.

“[The trilogy] is about recognizing that humans are liturgical creatures, but also that some of our cultural practices act as competing liturgies,” he explained. “These rituals form our deepest longings and desires.”

Smith is also finishing a commentary on Charles Taylor’s A Secular Age. The book will examine why people still long for transcendence in a secular world. He’s excited about its potential to reach beyond Christian audiences.

“I’m hoping it helps [non-Christians] make sense of their own longings—why the story the new atheists and religious fundamentalists tell doesn’t account for their experience,” he said.

In addition to authoring books, Smith is the editor of Comment Magazine. He also contributes articles to other publications and writes a blog.

In his spare time, Smith enjoys gardening with Deanna, reading fiction and poetry, traveling, and occasionally, trying to learn the banjo.

Letters to a Young Calvinist: An Invitation to the Reformed Tradition, (Grand Rapids, MI: Brazos, 2010).

Winner of the Christianity Today Book Award in 2010

Smith was passionate about freestyle BMX—stunt riding—in his younger days. He actually used to come down to Michigan for competitions.