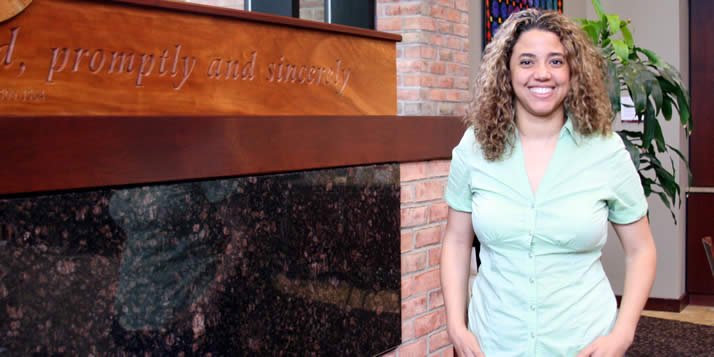 When Calvin sociology professor Elisha Marr’s class told her she ruined movies for them, she counted the course a success.

The interim, Calvin’s January term, saw students travel to Hollywood for an in-depth study of media. Marr’s goal in teaching it was that they would come back to Grand Rapids more aware of stereotyping in popular culture. If achieving that goal meant ruining a few movies, Marr thought it was a price worth paying.

As an intersectional sociologist, Marr studies class, race and gender. Her work often focuses on the way the media portrays these subjects because she believes it has a big impact on the way we view them.

That impact can be positive: Shows like 30 Rock and The Colbert Report do a great job tackling race and gender issues, she said.

She also credited the movie Deep Impact and TV show 24 with challenging stereotypes by having black actors play the president, something many believe opened people’s minds to a black president.

Marr has seen plenty of examples of the media “giving people what they want to see” in her research on media coverage of transracial adoption.

She said that while the media portrays adoptive parents as saviors—moral, pious and generous—it tells a very different story when it comes to birth parents.

“All of our stereotypes about race and class are applied to the birth family, which is usually a family of color,” Marr explained. “Birth parents are never interviewed since their identities are confidential. We just hear them talked about by agencies and adoptive parents. They are often characterized as dysfunctional, bad with money and promiscuous as a result.”

The children they give up for adoption face some of the same stereotypes. Research shows that despite their middle class backgrounds, many transracial adoptees are treated like members of a lower class when they aren’t with their adoptive families. For Marr, this shows the strong ties between race and class stereotypes.

“Normally, we think of money as class, but this [treatment of transracial adoptees] shows it’s more than that,” Marr said.

She believes the ability to recognize these stereotypes in the media is essential to combatting this kind of thinking. But Marr says many stereotypes are so engrained in us we don’t realize they’re stereotypes. She often sees this lack of awareness in her students.

“A lot of students think racism is over,” Marr said.

However, she’s hoping to change that thinking one class at a time.

“Once you teach [students] how it manifests—whether it’s race, gender, or class—they’ll see it in action,” Marr explained. “The more awareness, the more people are likely to change.”

If the response so far is any indication, Marr’s efforts seem to be working.

“A lot of the time it’s after the semester’s over,” Marr said. “They’ll e-mail me and say, ‘I know what you’re talking about now! Look at this commercial!’”

The mouth of a sociologist

When Marr was a student at Michigan State University (MSU) in Lansing, Mich., sociology and stereotypes weren’t even on her radar.

She planned to study accounting until a social sciences professor told her she had “too big a mouth to be an accountant.”

Marr thought about it and decided the professor was right.

A career aptitude test suggested several career fields for Marr, one of which was sociology. Marr decided to take her sociology core class and see if she liked it. By the end of the class, Marr had a new major.

However, the sociology classes at MSU had hundreds of students in them. Drawn to the small class sizes, Marr transferred to Calvin for her sociology degree. She returned to MSU to get a masters and PhD in sociology.

A job that fits

At first, Marr was ecstatic when she landed a tenure-track job at a big university.  But she soon found herself longing for the liberal arts culture at Calvin.

“Everyone in my classes was grudgingly there,” she remembered. “The department wasn’t really valued. There was no university support even for those who were interested in sociology at [the university].”

When a job opened up in Calvin’s sociology department, Marr took it. She hasn’t looked back since.

Yet much as she loves Calvin, Marr admits there is one job that might tempt her to leave: “I would love to be an international spa critic. Traveling the world and trying out spas—that’s my retirement plan.”

“Are You My Mother? How Transracial Adoption Provides Insight Into Who is a Mother and Who Gets to be Mothered” in forthcoming Adoption and Mothering. Ed. Latchford, Frances. Demeter Press. Toronto, ON.

As a child, Marr dreamed of being Madonna when she grew up. Although she never achieved her aspiration of pop stardom, she did play percussion in a garage band called RockFight.