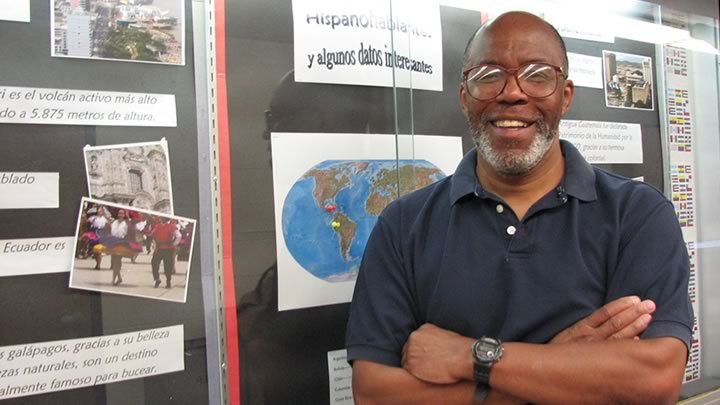 According to the U.S. Department of Labor, the average American will change careers three to five times in their lifetime. For Calvin professor of Spanish Ed Miller, that statistic does not apply.

"I always wanted to teach,” said Miller. Teaching Spanish however, was not even an option until he was 22, which is when he started speaking the language.

Miller’s roots are in the Pacific Northwest. He grew up in Tacoma, Wash., and while in high school, he first aspired to be an educator. “I had a math teacher who was just excellent,” he explained. “I always wanted to have that influence on students.”

Western Washington University was Miller’s first stop on his path to becoming a teacher. He loved coaching and studying history, which prompted him to major in both physical education and history.

Life south of the border

When he graduated in 1970, Miller joined the Peace Corps for a two-year commitment in Rio Chico, Venezuela, a small town two hours outside Caracas, the nation’s capital. For two years Miller taught physical education to kindergarten through high school students and assisted in an after-school recreation program.

In Venezuela, Miller came to learn and love Spanish. When he arrived, though, the odds were stacked against him—he was the only one in the town who could speak English, and he only had one year of high school Spanish to work with.

"There is the stereotype that if you start after a certain age, learning a language is difficult,” explained Miller. But Miller thinks he had the best teachers; the children in his recreation program. “Kids can be very understanding,” added Miller. Learning Spanish was fun for Miller: “It felt like a game rather than a requirement.”

Miller extended his two-year commitment to four. In his third year, he trained teachers on how to instruct physical education classes, and in his fourth year he coached basketball and track and field at the La Universidad de Oriente.

When Miller returned to the United States in 1974, he continued his education at Indiana University.  He was interested in bilingual education and Spanish literature.

"Once you start reading novels … that is when the love of the language comes out,” said Miller. “When you read literature in a different language, you learn something about the culture.”

As a graduate student, not only did Miller hit the books, he hit the pavement: he participated in over twenty marathons. “It’s a challenge,” Miller said. “It is 26 miles, and anything can happen—even in the training leading up to it.”

Though Miller did not complete his dissertation until 1991, he taught in the meantime. He took a three year appointment at Wake Forest University in North Carolina. Following the appointment, he landed a position back in his home state of Washington at Whitworth College. Miller was happy about returning to the Pacific Northwest.

Move to the Midwest

Miller returned to Whitworth after his year-long appointment, but in 1994, he received an offer for a tenure track position in Calvin’s Spanish department. “Calvin was a much better fit,” he explained. “If I wanted to grow as a Christian teacher, Calvin would be a better place to do that.”

Miller is delighted when his students can use their Spanish to help others. He recounted when a former student assisted a non-English speaking person who was having a health problem. The student was able to assist the distressed person with skills acquired in Miller’s class. To Miller, stories like this make the job worthwhile.

For the past eight years Miller has researched a group called “silenced voices”— Spanish authors who are ignored in the academy, namely, minorities and women. Through his studies, Miller is not trying to suggest they are any better than traditionally read authors. “You need to at least discuss what these writers have to offer,” explained Miller.

Many churches, one strong faith

Much like his geographical journey, Miller’s spiritual journey has taken him to several denominations. He was born a Baptist, but grew up Catholic. When he married his wife Leslie in 1982, they decided to join a Presbyterian Church. Now, the family attends Neland Avenue Christian Reformed Church. Miller reflected on his varied faith background: “It was a positive experience; it allows me to be more flexible and open.”

Miller enjoys spending time with Leslie and their three children, Scott, Holly and Tyler. The family spends their free time with tennis, traveling and board games.

In the fall of 2008, Miller will venture to Honduras with Calvin students for four months. True to his calling as an educator, “I like seeing students grow in their ability to speak the language and understand the culture, but also to see them mature from the experience they get. They get to see all kinds of aspects that, if you were a tourist, you wouldn’t get to see,” Miller explained.

"Ed genuinely loves people,” said department colleague, Professor Dianne Zandstra. “He is delighted to meet them and happy to see them again; he enjoys a good joke and his hearty laughter helps make our department, more than merely a workplace, a warm and welcoming place to be,”

Little Known Fact
Has been mistaken for Danny Glover many times