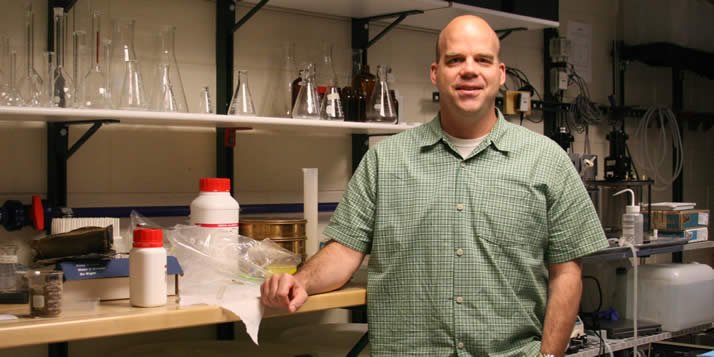 Calvin professor David Wunder was on the path to be an engineer two years before he decided to become one.

It started as part of a deal with his dad. If he majored in engineering, he was allowed to play college soccer.

At the time, Wunder considered the engineering classes training for when he became an architect—his dream since childhood.

If Wunder hadn’t taken a few courses in water treatment during his junior year, he might be designing buildings today. Through those courses, Wunder realized God was calling him to be a water treatment engineer.

“I saw clearly that [water treatment] would be a way to serve people with my work,” he explained. “I also thought it was just really cool.”

Wunder didn’t always factor God’s will into his plans.

Although he grew up attending a Presbyterian church, Wunder didn’t fully embrace Christianity until he got involved with the church youth program as a sophomore in high school. The program showed Wunder a different side of God.

“[I realized] the God of the universe loved me and wanted the best for me,” Wunder recalled. “That through Jesus Christ he forgives me and restores me with lasting purpose was truly irresistible.”

Wunder’s Christian faith shows in his commitment to service. He spent six months volunteering in Africa with Engineering Ministries International after graduating from his master’s program. The trip inspired Wunder’s interest in improving water quality in developing countries.

After returning from Africa, Wunder enjoyed a decade working as a water treatment engineer for a national consulting firm that served municipal and industrial clients in Minneapolis, Minn. He also enjoyed his “side” gig as part of the soccer coaching staff at Macalester College in St. Paul, Minn.

This coaching experience confirmed a desire to teach undergraduates. So when a position opened up in Calvin’s engineering department, Wunder took a risk and applied. He got the job.

Wunder applies what he’s learned to his current position.

“[As an engineer], you learn a lot as you work,” he explained. “I integrate my experiences with the theory and textbook information that I teach students and with the research I conduct with undergrads.”

In his research, Wunder continues to seek solutions to water quality and treatment issues in different parts of the world. He’s currently conducting research with students focused on the use of bagasse charcoal, a sustainable resource derived from unused sugarcane material, as a way to treat water and provide residential fuel in developing countries. He also works with U.S. water utilities to improve and optimize their treatment systems.

While that work may be important, nothing is as important to Wunder as teaching students what it means to be Christian engineers.

“You may never see the person who uses and enjoys the system you design, but I want [students] to know that the thoughtful engineering we do is kingdom work with real benefit to society,” he said.

Wunder has similar goals as a parent to three kids.

“I love seeing my kids understand their place in God’s world,” he explained. “They may not grow up to be engineers, but I want them to know that God loves them and has wonderful plans of purpose for them.”

When he’s not enjoying time with his kids, the self-described “frustrated interior designer” embraces his inner architect through a variety of projects with his 96-year-old home. He also coaches his son’s soccer team and enjoys an occasional pick-up game.

Wunder was a backpacking guide for three summers in Colorado through Young Life in the early 90s.