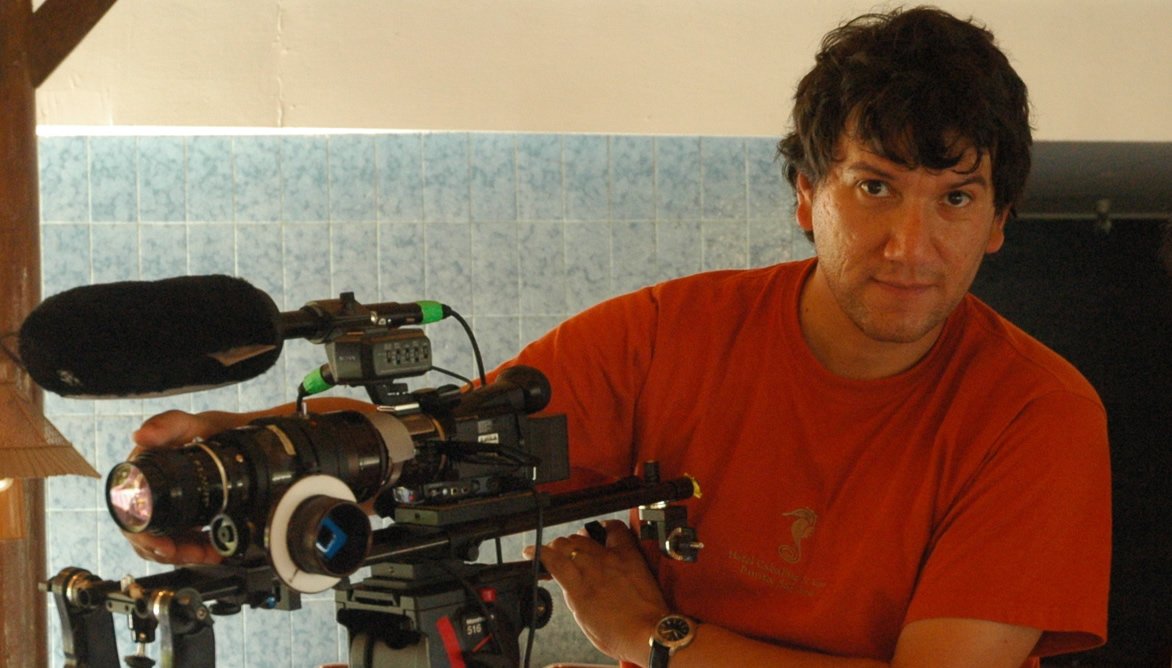 Calvin CAS and filmmaker Daniel Garcia has made films about child soldiers in Uganda and philanthropists in Grand Rapids.

Garcia’s journey began in Tijuio, Peru, a town surrounded by 12 volcanoes that he described as beautiful. He was one of four children, and he loved to fish. Garcia’s mother was a Christian author and his father was a Baptist minister. The family moved to the capital city, Lima, when he was a child.

Garcia attended Pontificia Universidad Católica del Perú to study linguistics and literature, which he thought would be a good springboard into law or psychology. But, in his last year of college, he started teaching high school students literature part time and working at an advertising firm. “That’s when I fell in love with visual communication,” he said.

The love of visual communication stuck, but his satisfaction with his work did not. “I got very sick of advertising,” Garcia explained. He acknowledged that the pay was good but pointed out: “You get sick of thinking about one pair of jeans compared to this one, and they are the same. It gets monotonous. You are not called to tell the truth, but present an image.” He reasoned: “God calls us to something deeper.”

For years, Garcia contemplated moving to the United States, and in 1995 he had the opportunity to attend the University of Wisconsin for a couple months. Following his interim stint at Wisconsin, he pursued a master’s degree in communication at Wheaton College in Illinois. At age 26, he was confident he could learn the language: he joked that he had a dictionary in his left hand during his entire first semester.

Mark Fackler was his graduate advisor and also the dean of Wheaton’s graduate program in communication at the time. Garcia not only mowed Fackler’s lawn, but ate dinner at his house many times. He received his master’s in communication in 1998 and taught Spanish at Wheaton for one year. In his free time, Garcia made movies. His first script, he confessed, was terrible, but he loved the film-making process.

Garcia’s new goal was to make movies and teach college. “I liked too many things,” he joked. His goal was not easily attained; he did not have the funds for more education. But Ohio University (OU) in Athens allowed him to teach Spanish while simultaneously earning his master’s in film studies.

While teaching at OU, Garcia worked on a four-year documentary film project about inmates at a Peruvian prison. He thought that the dynamics in a foreign prison would make for a compelling story, but the warden would only allow him to film in the pavilion of the prison: “I bought a spy camera and snuck myself in,” Garcia explained. He eventually got caught, but the officials were forgiving of his attempt.

Garcia used that experience to pinpoint why he loved film-making: “The adventure of the unexpected, the process of trying to be honest and help interpret other people’s lives.”

After wrapping up his prison documentary “Lurigancho” in 2002, Garcia was unsure about the next step to take. He did not want to return to Ohio University as he grew weary of working for such a large institution. He contacted Fackler who had recently joined Calvin’s faculty. His former advisor mentioned that Calvin’s department of communications arts and sciences needed a film professor. Garcia came to Calvin for a one-year appointment and found that it was exactly what he wanted: “I wanted a place where my intellect and artistic pursuits didn’t need a justification.”

At Calvin, Garcia does both of the things he loves: teach and make films.

In the summer of 2005, while teaching at Ugandan Christian University, he filmed the documentary, Drawings and War: The Testimony of the Children in Uganda. The film distills the many interviews he did with children kidnapped and forced into the service of the Lord’s Resistance Army (LRA), a paramilitary group waging a 20-year civil war against the Ugandan government. Drawings and War won “best documentary” at the 2006 Route 66 Film Festival.

The Gift of All

Recently Garcia completed The Gift of All: A Community of Givers, a series of interviews with 28 Grand Rapids-area philanthropists who contributed to the revitalization of the area. “"These people carry a message of virtue and wisdom that goes beyond the traditional idea of giving. They are loaded with the lessons of life, and they see that life as a gift to be passed on,” he said of that project. The Gift of All will have its premiere at 8 p.m. Wednesday, October 19 in the Calvin Fine Arts Center.

When Garcia is not filming and teaching, he is spending time with his wife, Erin, whom he married in 2006. Erin is a Calvin grad who works at the college as the coordinator of student activities. The two have a dog, Conrad, who is a beagle mix.

For Garcia, his journey all comes down to this: “I like to see in the people’s faces if what you are saying is challenging and spiritually rewarding,” he said. “(There is) beautiful inner-joy when you share an experience that sparks something in others.”