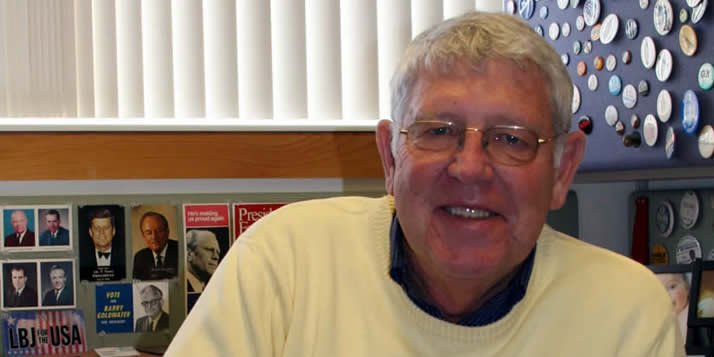 Professor Smidt in his office.

Recently, reporters from The New York Times, The Wall Street Journal, Christianity Today, The Washington Post, the Los Angeles Times and USA Today  have sought the opinion of Calvin professor of political science and director of the Paul B. Henry Institute, Corwin Smidt.

"It keeps you going—all these telephone calls from different people—but it’s part of my job at the Henry Institute,” said Smidt.

In 2008 the Paul B. Henry Institute for the Study of Christianity and Politics piloted a survey that examined the political consciousness of religious voters. Smidt and his colleagues traveled to Washington D.C to deliver the results, an event which was nationally televised on C-SPAN.

Smidt reasons that several factors have increased the public’s interest in Christian voters’ patterns. “Religion was viewed to be an important factor in determining the outcome of the 2004 election,” Smidt explained. “Will it continue to have an important role and what role?”

He also pointed out that the old leaders of the “Christian right” are phasing out, and the new generation of leaders may have more nuanced political priorities than their predecessors.

Despite the media frenzy surrounding the survey, Smidt is not quick to admit his influence. “He understands that the best products get produced when every participant focuses on the project at hand and doesn't care who gets the credit,” said professor of political science and institute colleague Douglas Koopman.

From sports to politics

Politics first captured Smidt’s attention when he was a youngster, living in Iowa. Smidt’s father was a minister, so his family moved from one small U.S. town to next. Though his home was not fixed, however, his interest was—athletics, specifically baseball and basketball.

While he was in middle school Smidt was benched from sports because of hip surgery. He was confined to the couch, where he recovered while watching the Nixon-Kennedy political conventions of 1960. “It was a different political era,” he explained. “The dynamics prompted me to politics.”

After one summer of rest, Smidt eventually got off the couch (and bench) with a new-fangled interest: politics.  At Northwestern College in Orange City, Iowa he played forward for the basketball team while he majored in history and political science. (The childhood surgery that first acquainted him with politics also left a steel pin in his hip, deferring him from service in the Vietnam War.)

While an undergraduate,  Smidt considered his career options. He thought he might become a lawyer. He also envisioned himself running for office someday. “I thought, ‘Well, what would I want to do—wills and deeds?—or would I rather teach college?’”

After a year spent doing campus ministry at Michigan State University—where he met his future wife, Marilyn, a nurse—Smidt finished his master’s in political science at the University of Iowa, attended New Brunswick Theological Seminary for a year (“I did not feel called, but I kind of wrestled with it,” he said.), and returned to Iowa to complete his PhD. After graduation in 1975 he took a teaching job at Quincy College in Quincy, Ill.

In 1977, after he had taught two years at Quincy, the Calvin political science department offered Smidt a position. “I enjoy teaching at Calvin,” he reflected. “Calvin students are diligent and hard working.”

Life as a director

The Paul B. Henry Institute was established in 1997 to commemorate the life of Paul Henry, a Calvin professor of political science and a Michigan and United States congressman. Henry taught at Calvin from 1970 through 1978. He died of brain cancer in 1993.

Smidt was appointed to the Henry Institute director’s chair in 1997 and remains in that position today. The end of this year marks the end of his third three-year appointment. When he is not organizing lectures and conferences, writing grants and heading up research projects regarding Christianity and politics, Smidt is in the classroom. One of his motivations: “Helping students realize both the diversity and complexity of social and political life,” he explained. “The things people take for granted, haven’t always been that way.” One of the complexities that Smidt stresses in his class: “It is wrong to think that one position is reflective of the Christian position.”

On family and being chased

Outside of the classroom, Smidt spends time with his family. Both of his children are Calvin grads, and the family enjoys travel and St. Louis Cardinals baseball games. At age 62, he occasionally gets out on the basketball court.

Even though Smidt is regularly chased by reporters, he maintains a perspective which is (not surprisingly) all about education: “Help alert reporters and, hopefully, then readers to things that may otherwise be overlooked. I can at least educate the broader public.”