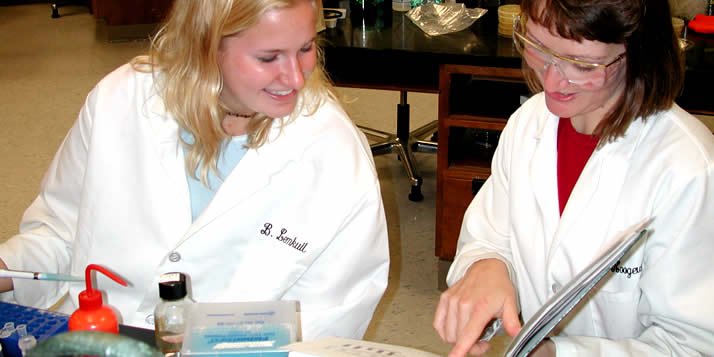 Calvin biology professor Arlene Hoogewerf has had FBI agents come to her class.

Calvin biology professor Arlene Hoogewerf has had FBI agents come to her class. She has taught students to do fingerprint analysis, blood spatter analysis and DNA fingerprinting. She has even taken a class to the Michigan State Police Crime Lab. Hoogewerf team-taught this class—titled "CSI: Calvin College"—during the 2005 and 2006 interims with biology chair David DeHeer.

The two professors developed the class because a number of biology students were interested in going into forensic science, Hoogewerf said: "We wanted to provide an opportunity for them to meet with various professionals in the field and understand what the job was like and what kind of educational background was needed."

Hoogewerf, who was born in Washington but raised in Spring Lake, Mich., wasn’t always interested in biology. Her favorite subjects in high school were English and chemistry, and she hated biology. But when she started her freshman year at Calvin, she discovered that in order to pursue medical technology—a major that would allow her to take the chemistry, English and Spanish classes that she wanted—she would need to take a biology class.

"I figured I’d just have to take biology at some point, so I went ahead and did medical tech," Hoogewerf said. "And the bio class was actually fascinating! It was the first time I’d gotten to look at what goes on inside cells. So after that class, I changed my major to biology."

During her free time in college, Hoogewerf played flute for the Calvin Band; it was here that she met her husband Ross, a trombonist.

After graduating from Calvin, she went on obtain a PhD in nutritional biochemistry at Cornell. She focused on the enzymes that metabolize fat and the role they could play in preventing heart disease. Hoogewerf then conducted post-doctoral research for two different pharmaceutical companies: the Upjohn Company (now known as Pharmacia) in Kalamazoo, Mich., and GlaxoSmithKline plc, a British company.

At Upjohn, Hoogewerf spent three years working with the cancer and infectious diseases unit. She studied how enzymes affect angiogenesis—the development of blood vessels. "This is important to cancer research," Hoogewerf said. When new blood vessels are made, they supply blood to all parts of the body, including cancerous tumors. "A tumor can’t survive without a blood supply," she explained.

Following her time at Upjohn, Hoogewerf spent another three years in Switzerland researching inflammatory diseases for Glaxo. "When it comes to diseases like arthritis and asthma," she said, "the problem is that you have too much inflammation. We wanted to develop pills that would address the over-inflammation that comes with diseases like these."

But while Hoogewerf’s areas of research have been quite varied, they share a connection. "The link between the three is proteoglycans," she said.

Hoogewerf is fascinated by proteoglycans, large part-protein, part-carbohydrate molecules on the outside of a cell that regulate the cell’s interior by allowing molecules through the cell wall.

"When I started my PhD, we thought that proteoglycans were just a glue that held cells together," Hoogewerf explained. "My research was really cool because I got to see that they are actually much more complex than that."

In each of her areas of research, Hoogewerf studied the effects of proteoglycans. "They trap enzymes and molecules that help with fat metabolism, cause inflammation and aid angioplasty," she explained. "So it was really cool to work in one area and then apply what I learned there to my next area of research."

Calvin: The switch to microbiology

Hoogewerf decided to apply for a job at Calvin when a friend told her that the college had an opening for a microbiology professor. While she wasn’t a microbiologist, Hoogewerf really wanted to teach, so she applied for the job.

"She transitioned and took over our microbiology program," DeHeer said. "That’s been her biggest contribution. I also find that she spends a lot of time in commenting on student work. She’s willing to make good comments to help students improve."

After Calvin hired her, Hoogewerf decided that she would pursue a new research area, this time a microbiological one: biofilms. Biolfilms are three-dimensional communities of bacteria that communicate and behave collectively. Biofilms adhere to places where a liquid meets a surface. "The easiest example is dental plaque," Hoogewerf said. "If you take a microscope, the plaque is about 50–100 microbes thick."

When she’s not examining infections, Hoogewerf enjoys spending time with her very musical family. She and her husband, who works as a building services supervisor at Physical Plant, have three sons: Bennett, Steven and Liam. All three of the boys play musical instruments, though they don’t all enjoy doing so. "Steven really prefers listening to music," Hoogewerf said. The Hoogwerfs are very active musically in their church, where they both sing regularly. They occasionally play there as well. 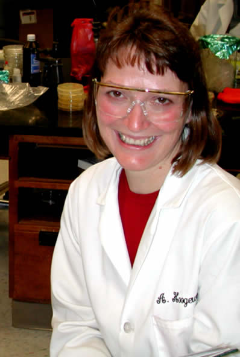