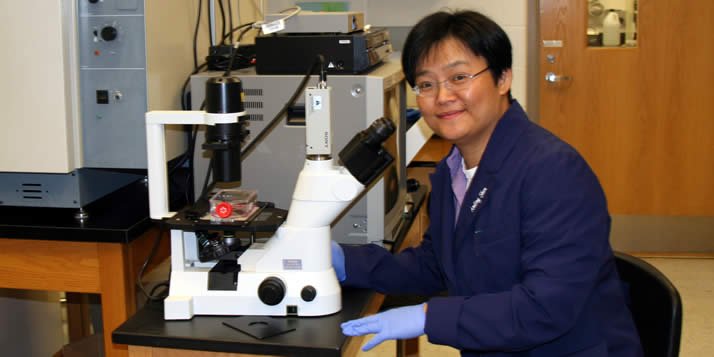 Anding Shen is a prominent player in HIV research.

“It’s because all we did was memorize,” she explained.

Always a curious person, she wanted to find answers for herself. She wanted to become a physicist. Her father, a physicist at a Chinese university, didn’t think physics would satisfy her curiosity.

“The questions that can be answered in physics are already answered,” she remembered him saying. “Why don’t you go into biology?”

Shen did. And biology turned out to be anything but boring.

Unlike Shen’s high school biology class, her courses in the biology department at Drexel University in Philadelphia, Pa. emphasized hands-on learning. It was just the kind of work Shen loved most: full of questions waiting to be answered.

“We did a lot of labs and inquiries. We got to ask our own questions, and we tried to answer them,” she said.

Her time at Drexel also helped her develop a better idea of what she wanted in a career. The school connected her with a number of pharmaceutical companies through its internship program. Because of the work experience Shen got at those companies, she knew she wanted to do basic research in biology; she liked trying to figure out how things worked. She also learned she was less interested in product development. Based on those two factors, Shen decided to go into academia.

She set off for graduate school at Johns Hopkins University in Baltimore, Md. with thoughts of pursuing a career in cancer research.

“I thought cancer was most interesting because cancer is an enemy from within. Your own cells destroy the person—the community within them,” Shen explained.

She also developed an interest in immunology.

“I wanted to try to figure out how the immune system defends the body,” she said.

Shen joined lab groups for cancer and immunology research. However, graduate students were expected to do a rotation of three or four lab groups. Shen needed one more. A friend of hers had recently joined a lab group for HIV AIDs research; she suggested Shen join it, too. She did.

Shen quickly realized cancer research was far too detail-oriented for her taste and found she didn’t like immunology research much better than cancer research. But she did like her HIV AIDs lab.

“HIV has a lot of questions still waiting to be answered. No other infectious disease lasts forever. With HIV, the drugs only suppress the virus. If you stop taking them, it comes back,” she said.

Since joining that HIV lab, Shen has gone on to become a prominent player in HIV research. She was given a big break when a Yale graduate student asked her to continue his groundbreaking research.

The Yale student discovered that endothelial cells, which line human blood vessels, were helping the HIV virus get into T cells (white blood cells that play an important role in the immune system). He knew he was onto something big. However, he was changing careers, so he asked Shen to continue his research. She agreed, and she received a $300,000 grant from the National Institutes of Health (NIH) to help her do it.

However, Shen’s contributions to AIDs research may never have happened if her mother had been a few inches taller.

“I was in a Sports Academy in sixth grade, and I could have ended up on the Olympic team for shot put and discus, but they said I wouldn’t be tall enough because my mom was short,” she explained.

Not that height stopped her from setting school records for discus and shot put at every school she attended. She pursued other sports like volleyball as well. Without that love for volleyball, Shen might not be a Christian today.

On one of her first days at Drexel University, Shen joined a game of volleyball with a group of people involved with Intervarsity, a nationwide college campus ministry group. After the game, they invited her to Bible study. Although Shen said God was rarely mentioned in China, the invitation was not her first encounter with Christianity.

The summer before Shen left China to go on an American exchange program, her father hired an English professor from his university to come over and have conversations with her in English so she could practice her verbal communication skills. The professor was a Christian. Each week, she tried to tell Shen about Jesus and the Bible. Shen was skeptical.

“At the time, it was like a fairytale, like Harry Potter. Are you serious? This is real? Obviously, she didn’t convince me.”

However, before Shen left for America, the professor gave her a copy of the New Testament. She took it with her to the United States and started reading it. Shen was intrigued.

“It seemed more believable than what the professor told me. It was mostly normal things—even Jesus’ healings were pretty normal. It’s not that different than martial arts healing people in China,” she said.

Shen didn’t know what to make of the New Testament, but she was curious. So when the Intervarsity students invited her to Bible study after volleyball, she agreed to come.

Still, Shen came with a very different perspective than the other members of the Bible study.

“In China, you don’t talk about God. You just assume he doesn’t exist,” she explained.

As a result, her questions were much more fundamental than the questions with which her friends grappled.

“I wanted to know if God was real; they assumed he was.”

Shen ultimately decided she believed God was real, and two years after that volleyball game, she became a Christian.

Shen wanted to be able to incorporate her new Christian faith into her work. Having enjoyed helping her father with his lesson plans, as well as evaluating the curriculum at Drexel, she also hoped to teach. Putting those things together, she decided to look for a job at a Christian liberal arts college. The problem: Shen didn’t know how to find one.

When she met an academic dean from Messiah College at an Intervarsity graduate conference, she asked him where to look. He recommended checking the Council for Christian Colleges and Universities (CCCU) website for job postings. Calvin College had a job posted for immunology. It was rare that a job fit her interests and beliefs so perfectly. Thus, even though Shen had never heard of Calvin, she applied. She got the job.

While Shen’s research on HIV is important, as a Calvin professor, she is just as committed to teaching. And when asked what her favorite part of being a Calvin professor is, it is the work that Shen does with students that stands out in her mind.

“I like to see the light bulb go off,” she said, referring to the moment when a student grasps a concept or idea. “Teaching is a mutually beneficial relationship.” And, of course, she added: “I love it when students have good questions.”