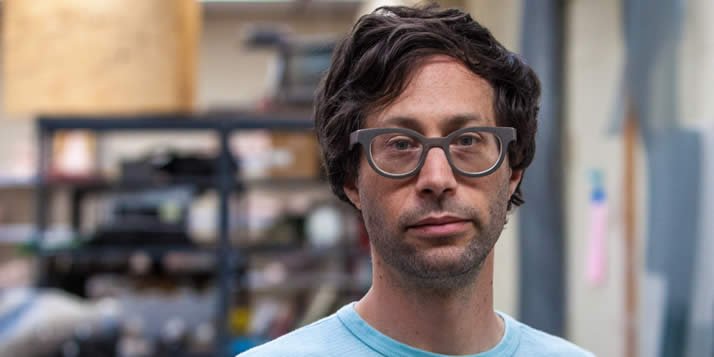 Adam Wolpa is passionate about art and food.

A number of people know Adam Wolpa is an artist. Many realize he’s an art professor at Calvin, but few know about his lengthy career in the restaurant business.

Wolpa, who got his first job in food service at 15, says his experiences in the trade have long been a driving force behind his art.

Some of Wolpa’s work even features culinary elements. His piece, “Give Me Liberty or Give Me Death,” saw him turn the fermentation of sauerkraut into a symbol of renewing the rotten. At exhibit’s end, he offered the sauerkraut to attendees.

Although Wolpa’s art doesn’t always revolve around food, he sees similarities between making it and serving food.

His art often combines those performative elements under one idea. This concept-driven approach is typical of West Coast-style art.

While Wolpa attributes his affinity for West Coast art to his Los Angeles upbringing, it was a drawing class at an East Coast school, the University of Virginia, that inspired him to become an artist.

“[The class] completely changed my life,” Wolpa recalled. “It was just an intro course, but it was exciting because I realized that art was a serious academic discipline, in addition to being fun.”

He switched his major to studio art and went on to graduate with highest distinction.

After college, Wolpa spent a few years in San Francisco before moving to Iowa City to pursue an MFA in printmaking at the University of Iowa.

In Iowa, Wolpa met a Christian who was going to Uganda to do development work. The man challenged his assumptions about believers.

Wolpa decided to take a closer look at the religion of his mother and friend. That closer look led to a commitment to Christ.

It’s been 15 years since he made that commitment. Early on, Wolpa explored many different denominations. But since joining the Calvin department of art and art history in 2003, he’s embraced the Reformed tradition, especially its ties to Judaism.

Wolpa attends Square Inch Community Church, which welcomes both believers and skeptics to dialogue about faith.

Wolpa also enjoys dialoguing with his students: “I learn more from my students than anything else. I’ll often read theory books for the first time along with students, so I’m learning with them.”

He believes students—even those who never become artists—benefit from those discussions, too.

“You don’t have to be an artist to understand, value and appreciate art,” he reflected.

Wolpa’s youngest pupil, his three-year-old daughter, shows early signs of an artistic eye already: “She likes arranging things. I get a kick out of seeing that because of its affinity to sculpture. I see my style in some of her arrangements of toys and objects.“

"Space Is The Place: Activating Possibility in the Negative," SEEN, CIVA Journal Volume, 2009

Wolpa, a vegan, is currently building a tempeh incubator at his home. He hopes to use it to launch a tempeh subscription service. Tempeh is a cultured soy-based protein originating from Indonesia.