Exploring the social sciences and humanities through research 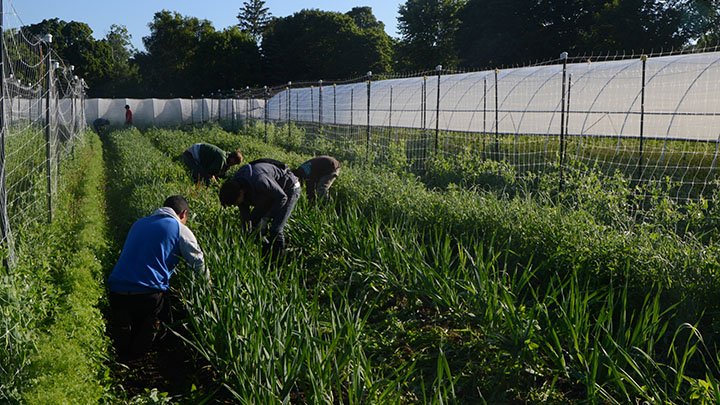 “One of the great things about Calvin, being the size that it is, is the one-on-one relationships with professors,” said Jenneka Cole, a McGregor summer research fellow.

The McGregor Fellowship program provides an eight-week mentoring and research opportunity for social science and humanities students considering graduate school. This year, students were invited to apply for one of nine different research opportunities. “Students are working on everything from literature reviews and field research to editing and curriculum development,” said Roman Williams, sociology professor and director of the program.

This summer, Cole is working with Ron Sjoerdsma, education professor, on curriculum development for a new Christian school in Kakata, Liberia. The school will be opening in an area where over 500 students did not have access to education. “For a country like Liberia, stuck in years of war and poverty, education is the thing that’s going to make a change,” said Sjoerdsma. The goal of this project is to create a teachers’ manual and help a new school become more independent.

“Often what happens is kids in West Africa are given western materials and taught western songs and poems,” said Cole. “It says a lot to students when they see that their culture is respected and represented in their textbooks.” The curriculum Sjoerdsma and Cole are developing will approach teaching methods within a Liberian context.

Cole is collecting research and her findings will be used in the book Sjoerdsma is writing. Cole is looking at concepts like cognitive development and classroom management and asking questions like: What does it mean to be made in the image of God and what does that mean in teaching?

Cole said she’s enjoyed her experience and learned a lot more about education. “It’s been great. I’ve gotten to know more students as well as other faculty members,” she said

McGregor fellows, James Owens and Marissa Smits, are working with Williams on a sociological study of an urban farm in Grand Rapids. Through observation and interaction, Williams said they hope to understand the place of urban farming within the community. Each summer the farm hires 10 to 12 high school students and just this year have opened a weekly café. “The program is teaching not just farming, but customer service, work ethic and finding your calling,” said Williams.

The McGregor Fellows work closely with the high schoolers and have a wide array of responsibilities both on and off the farm, Smit explained. “On the farm, we are farm hands; we do weeding, planting and harvesting. At the same time, we’re taking lots of notes on what we observe,” she said.

Splitting their work between the two atmospheres is something the students both said they enjoy. “I enjoy being able to switch between physical labor and office work,” said Owens. Smits agreed and said, “Having the ability to go back and forth between the two environments has been great.”

Williams said the McGregor fellowship helps students decide if they would like to continue pursuing research and higher education. “Students get great experience, and in some ways, it’s an opportunity for students to prototype their future,” he said. Smits said she plans to go on to graduate school, and she believes research experiences, like her work this summer, are what schools are looking for.

Learning from one another

“I really appreciate having Professor Williams as a mentor because we don’t just talk about research all the time,” said Smits. “A lot of the student researchers feel we have a mentorship that goes beyond the research we are working on.” In addition to the one-on-one mentorship the students receive, each week, both the students and faculty gather together. “Every Tuesday we have collective meetings, and each week one of the professors will share his life story,” said Owens. “It’s been great to see how each professor got to where he is today.”

“Students come to a liberal arts college for different reasons than going off to attend a big research institution,” said Williams. “Many Calvin students go off to pursue higher education, so this is the type of program we need to offer to students. On the other hand, it is also very valuable for professors to hear from students. Some of the students are smarter in some areas than I am,” said Williams.