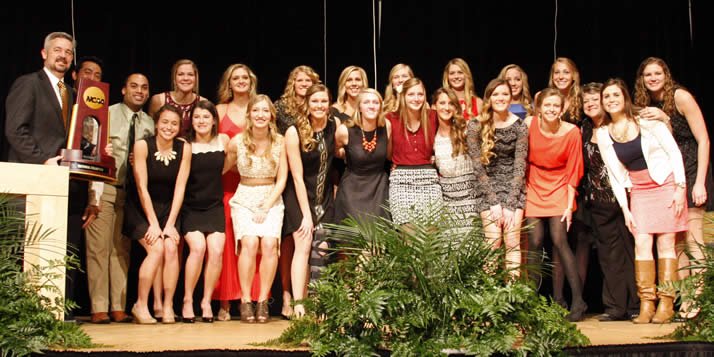 Just a year ago, Calvin’s volleyball team was leading the Division III national championship match 2-0, but was ultimately defeated by St. Thomas (Minn.) 3-2. After the defeat, crestfallen Coach Amber Warners sent an email to her disappointed team.

“We have experienced some amazing highs in the past year and some incredible lows,” she wrote in the e-mail. “I don’t know how to take the pain away but I do know that we are called to follow our Lord and know that because He is in charge there will be some amazing things to come from our past experiences. We will not just be okay but we will be very blessed.”

Now, one year later, Warners and her team can attest that an amazing victory has indeed come in the wake of a past letdown.

“This present journey really started 367 days before the national championship game,” said Warners in her speech at Calvin’s ‘Knights to Remember’ event on February 8 to commemorate the national championship volleyball team. “[After losing], I felt like something that was so important to us was just snatched out of thin air…It was devastating and I had a hard time accepting it.”

Warners’ e-mail the previous year continued: “I realize in the big picture of life, losing the final match on Saturday isn’t very important. At the same time, I think God cares so much about the little things and the things that happen in our lives that are important to us. I have prayed fervently that God would use me as well as our team, for His glory, no matter what and when the ending would be…in the glory of the win and the agony of defeat.”

Little did the Knights know the glory of the win would come in surprising fashion the very next year.

The Knights (35-1) were down 0-2 to Cal Lutheran (35-2) in the championship, but struck back to take three straight sets, obtaining their second national title in four years.

The Knights’ comeback in the championship game was the fruit of an entire season of labor, striving and solidarity toward the team verse, said chaplain Mary Hulst, who spoke at the ‘Knights to Remember’ event.

But what also helped the Knights recoup were lessons learned from their loss to Hope College earlier in the season.

“Coach Warners does a wonderful job of preparing us mentally and physically for whatever comes our way,” said senior volleyball player Stacey Kamp. “Forgetting about the last point or mistake and [not] looking towards the outcome was hugely influential on our season. About midseason, the lost to Hope was a turning point…Getting over that as a team and talking through it was part of what brings us here today. We needed to go back to playing with no fear and no regrets. We were determined to make that the last time to ever lose in that gym.”

Jeff Febus, sports information director at Calvin, also spoke at the ‘Knights to Remember’ event, revealing the most memorable events and themes he recalled about the season. One of those themes was “Tired but inspired.”

“The thing that stuck out to me was the ability of this squad to dig down in the clutch and win when the going got tough, the five set match wins,” Febus said. “The very first weekend of the year, when they went to the state of Washington and defeated Pacific Lutheran, being down two sets, playing a nationally ranked team on the other side of the country, and then winning the next three. That really showed something right there.”

Their winning streak continued. And the momentum carried with them to their recent NCAA victory.

“That led to other five set wins such as against Hope College in the MIAA tournament finals after trailing in the fifth set,” Febus said. “Defeating Mount Union and Wittenberg in five set matches in the NCAA tournament. And then obviously in the national championship final against Cal Lutheran being down two sets to none.” 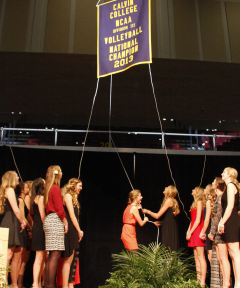