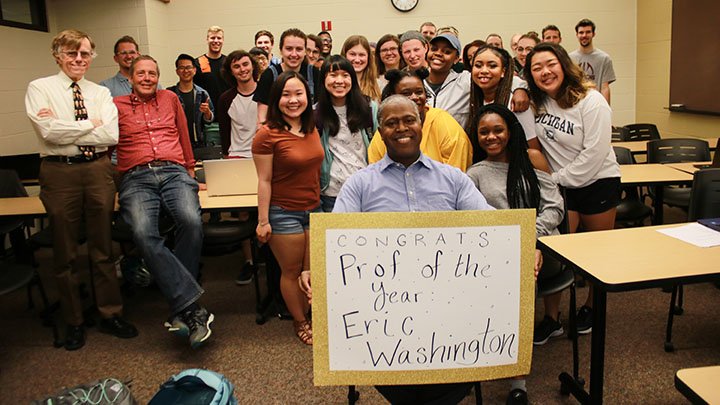 History professor Eric Washington is Calvin's 2018 Professor of the Year.

Grinning ear to ear, Washington said “Thank you!” as his class and those crashing it erupted with an ovation.

“Thank you all! This is great,” said Washington, who received a few more rounds of applause before the celebratory moment was over.

The professor of the year recognition is awarded annually by a vote of Calvin’s senior class. Eric Washington is the 2018 recipient.

“Everybody’s standing around, you all want to sit it on the class?” asked Washington.

That comment, though not taken seriously by the group who had joined for the celebration, is indicative of the welcoming spirit felt by the students in Washington’s classes.

“He makes class feel like a family,” said Kimo Cox, a junior sociology major, who has taken five of Washington’s classes. “You come to his class happy, even when you are in the middle of a stressful time.”

“He’s a free spirit, yet humble guy,” said Maranda Brown, a first-year strategic communications major, who is taking her first class with Washington. “He breathes life into the classroom.”

“I want the class to be warm and inviting, for us to feel connected to one another, and I see that forged every semester,” said Washington, “that’s why I want to play music before class and during small group discussions, because I want it to sound like how it would sound if they were at a coffee shop, chatting with each other, like they are meeting up. I want to emit this warmth, so they can be relaxed and feel free.”

Washington’s students and colleagues say he creates an atmosphere in his classrooms where all perspectives are welcome, opening up the possibilities for some great discussions.

“He’s able to balance his culture with the perspective of the majority,” said Cox, “He’s so good at balancing it in a way that allows for everyone to engage ideas.”

“He’s good with speaking with students who come from a variety of points of view and backgrounds,” said Will Katerberg, professor of history and associate dean for programs and partnerships.

“Everyone’s culture matters,” said Washington. “No culture has more inherent value than another, and all cultures are fallen, no degrees on fallenness, no degree on intrinsic value, all valued the same. So, I want to bring my culture to the table and I want my students to bring their culture to the table and to feel comfortable, and let’s talk. The bottom line is about respect.”

And discussions continue outside the classroom and extend to any number of topics.

“There’s a steady stream of students who come to his office to talk about all sorts of things, not just about classes, but about life and contemporary issues,” said Katerberg.

And about another one of his passions: music.

“He’s the one who put grad school in my thought process,” said Avila.

Now, in large part to Washington’s encouragement, Avila is pursuing a master’s in higher education at Michigan State University. But, he’s also the coordinator of multicultural student programming at Calvin, where Washington serves as a faculty mentor and resource to first-year and upperclass students.

What started as a mentoring relationship is now in Washington’s words: “a robust friendship.”

Esteemed by his peers and his students

Washington earned a bachelor’s degree from Loyola University-New Orleans, a master’s from Miami University, and his PhD from Michigan State University. He’s taught in the history department at Calvin College for 11 years, and currently serves as director of the college’s African and African Diaspora Studies program.

Washington earned recognition from his peers in 2017 when he received the FEN (From Every Nation) Award for Excellence in Teaching. Recognition from those he teaches everyday though holds special significance for him.

“This means an awful lot coming from the students,” said Washington. “Over the last four years I know I’ve taught at least 400 students, maybe closer to 500, so that’s about half of the graduating class. I feel a deep connection with this graduating class, and it’s just a high honor that they voted for me.”


When research on the water turns to gold


Turning over the keys


Working together to stop human trafficking