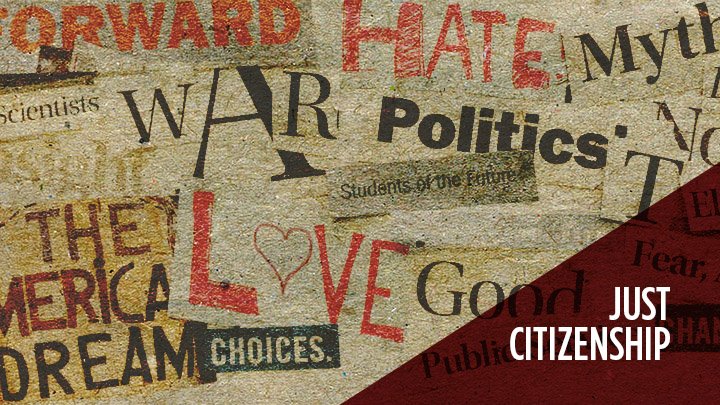 The combination of a turbulent political season and an increasing national distrust in news media has led many Americans to a state of questioning, including the Calvin community. What news sources can be trusted? How should one talk about these issues with others? What does it look like to be a just citizen in practical ways?

In fall 2016, Matthew Walhout ’88 and Jenna Hunt ’07 noticed people from different departments across campus expressing a need and desire for a programmatic way to discuss these emerging issues.

Walhout, physics professor of 20 years and dean for research and scholarship at Calvin for nine years, collaborated with Hunt, program coordinator for academic seminars, to create a space for the Calvin community to sort through these issues as a unified body.

After composing a list of pressing social and political issues, Walhout and Hunt reached out to those they thought would address the issues well. They found a variety of panelists and speakers, devised a program schedule and launched the Just Citizenship Forum in February 2017.

The Just Citizenship Forum occurs each Monday at 3:30 p.m. in Calvin’s chapel during the spring 2017 semester. All forums are free and open to the public, with video footage posted after each event.

Walhout and Hunt generated four specific outcome goals for the forum: an appreciation of respectful dialogue; an understanding of each issue in its context; ideas for how to get involved; and gaining tools for discernment. They accomplish this by having dialogue between attendees during the forum, as well as providing very practical tools and examples for how to be active citizens.

“We very intentionally ask people to turn to someone they didn’t come with. It’s really cool to see older folks talking to students and vice versa,” Hunt said. “These are conversations that might not happen anywhere else.”

“We also want to help participants leave with a vision for how they might actually act in society, take civil action, or get involved in an organization, rather than just learning passively,” Walhout added.

Some of the tools they hope to provide include principles for identifying fake news, instructions for how to contact legislators, and training for how to deal with issues one could encounter in public.

Hunt has witnessed many Calvin students express fear due to the nation’s current politics, and has also seen other students confused about that fear. She and Walhout hope this forum will provide information that will bring understanding to both sides of this divide, as well as the divide between political parties and generations.

“There are important values shared by people on all sides. As Christians we can hope to transcend the divisions and knit the opposing sides together with something more cohesive," Walhout said. “That’s not going to happen in an abstract way with a document; it’s going to happen when groups of people get together and talk through the issues, face to face. So we hope these events have representatives of people on both sides of those divides.”

Senior Isaac LaGrand, a history and philosophy double-major, has enjoyed the presence of diverse thought and discussion thus far at the forums. “The panels have generally had a really good mix of perspectives,” LaGrand said. “It's encouraging to see the institution try to cultivate regular discussion outside of the classroom. If Calvin really wants to be an instrument of the Kingdom, it has to acknowledge the times and equip people to deal with them, not just proceed with business as usual.”

In addition, sophomore Lauren Moose, a political science major, believes this forum is both timely and necessary for Calvin students, whether they consider themselves ‘political’ or not. “I think it’s important for Calvin to hold talks like these in our present political climate so that we don’t lose sight of different perspectives on issues that can define our nation,” Moose said. “Even if someone isn’t necessarily interested in learning more about politics, that shouldn’t stop them from trying to be a better-informed citizen. Everyone can benefit from conversation because it helps us formulate our own thoughts and opinions.”

Overall, this forum serves Calvin’s mission to think deeply, act justly and live wholeheartedly, not just in a career.

“Calvin College is about equipping students, but ‘equip’ means more than just giving tools for doing your career or job well; it’s being equipped to be a whole person in society, which requires you having people around you in community,” Walhout explained. “We want to give [students] civic know-how so they understand issues and know how to respond to them. This isn’t part of preparing for a career, it’s part of becoming a citizen.”