English students at home in their department 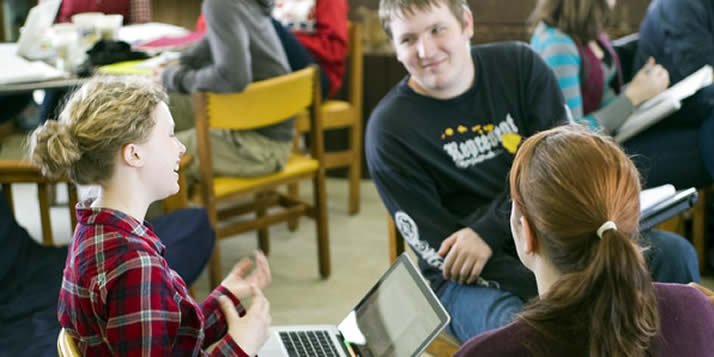 Calvin College English alumni are “sorta ticked now,” according to the tongue-in-cheek Prof. Bill Vande Kopple. Alumni who graduated before 2010 are seeing a world of opportunities open up in Calvin’s English department, and current students are reaping the benefits.

In recent years, English department faculty have initiated several programs to foster community between themselves, students, staff and even alumni, who may not have witnessed the changes while studying at Calvin but are invited back to participate in the new efforts.

In the fall of 2009, the department launched “One Book, One Department.” A brainchild of Prof. Gary Schmidt, the initiative offers free copies of the year’s designated book to interested students, staff, and faculty members. Faculty members host discussion groups in their homes for interested readers.

In its inaugural year, the department chose to read The Road by Cormac McCarthy. In 2010, the community gathered around The Book Thief by Markus Zusak. And in 2011, the department deviated from the concept of choosing just one book and offered discussions on four selections: Maurice Manning’s Bucolics, G. Willow Wilson’s The Butterfly Mosque, Jonathan Safran Foer’s Extremely Loud & Incredibly Close and Marilynne Robinson’s Gilead. This year, the department returned to the one-book model by reading Yann Martel’s Life of Pi.

Schmidt talked about the department’s vision for “One Book, One Department”: “It wasn’t to say necessarily, ‘OK, everyone has this book in their back pocket now,’ but that we’ve become closer as a community. And we think that that has shown itself in such things as classes where people may be more willing to talk because they just know each other.”

Schmidt points to a recent Life of Pi discussion at a professor’s home to illustrate the program’s impact: “We were supposed to start whenever, and I bet we were almost an hour into it before we actually started the book. It was just so much fun being together.”

Vande Kopple is also interested in bridging the gap between students and instructors. “It’s that professor-student community, which is number one for me,” he said.

Another opportunity for community-building is the annual writer’s retreat. Though run by the English department and attended by many English majors, the retreat is open to all students. Vande Kopple said that students from other departments have found affirmation in the craft on the retreats.

It is likely that they’ve also found a lot of fun—the retreats feature writing contests, jumping from snow banks and “wicked, wicked snowball fights,” as Schmidt describes them.

“One year we made them go up one by one on a lookout and howl like a wolf before they could eat their supper,” Vande Kopple remembered. Last year, 40 students—more students than the beds available—made it for the wintery weekend, some sleeping on couches just to get the chance to participate.

And for those who prefer not to brave the cold weather, the English department offers a warm meal through “Soup Mondays.” Every Monday during the January interim, English department faculty and staff provide soup for students between morning and afternoon classes on campus.

While premiering a slate of community events, the English department has also revamped its curriculum over the past few years. There are now three English majors (literature, writing, and linguistics) and a new internship requirement for each.

Adding to the changes is what Vande Kopple calls a “critical mass” of student and alumni publications. In 2009, the department launched Calvin Writers Recommend, an online resource for students interested in having their work published. Schmidt says students often stop by to show professors their published works. “It’s been an exciting time,” he said.

As for alumni, they are taking notice of this exciting time, partly due to the department’s following on Facebook. And Vande Kopple is quick to invite alumni to participate in English department programming.

Alumna Bekah Williamson ’12 came back to Calvin for the department’s fall picnic, and one of her comments that day has stuck with Vande Kopple: "I was ready to graduate and say goodbye to college, but I wasn't ready to say goodbye to the English Department."

For him, Williamson’s words are proof that the department’s community-building efforts are working. 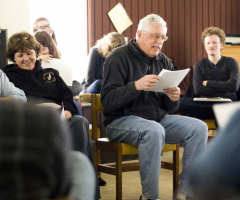