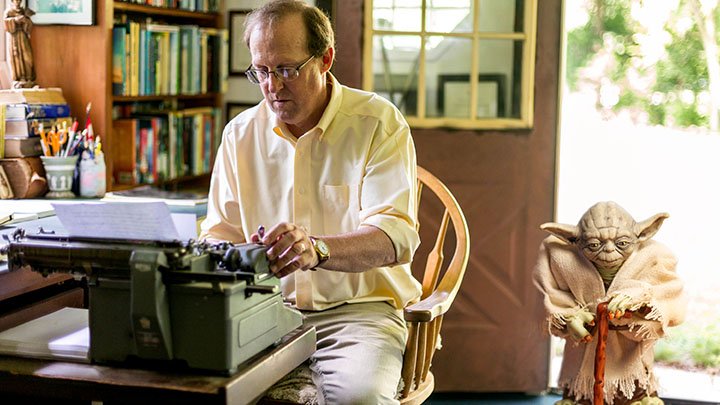 Gary Schmidt wrote his Yoda story on a 1953 Royal typewriter in a hut on his property in Alto, Michigan.

To celebrate the 40th anniversary of the first Star Wars film being released, LucasFilm had the idea of having 40 stories developed about events that had to happen in the original film (Episode 4), but weren’t ever fully told. And then, each of those stories would be told from the point of view of a Star Wars character. The 40 stories, written by 40 different authors independently of one another, has been compiled into the anthology “Star Wars: From a Certain Point of View," which was released in Fall 2017.

One of the selected authors? Calvin College English professor and accomplished author Gary Schmidt. The question he needed to answer? “How was it that Yoda discovers that Obi-Wan Kenobi has been killed by Darth Vader?”

All 40 stories are now considered canon, which means that Schmidt is now forever written into the Star Wars world.

“I mean, dang, who wouldn’t want to write himself or herself into the Star Wars world; it is such a great honor,” said Schmidt. “To be the guy that’s been given the opportunity to write the Yoda story—the only Yoda story in this volume—that’s amazing.”