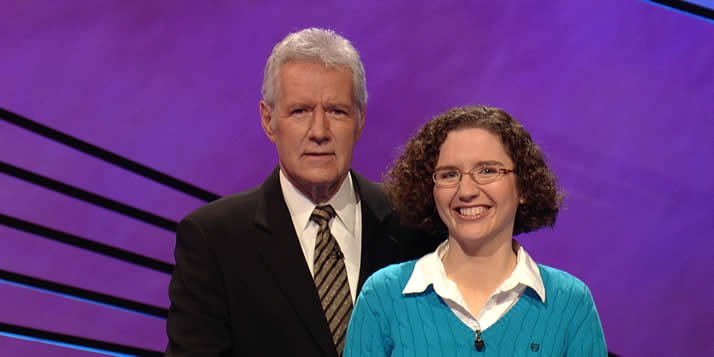 Cathy Guiles, formerly of the staff of Chimes, recently competed on three episodes of Jeopardy and won two.

Cathy Guiles, a 2003 graduate of Calvin’s English department recently competed on the game show Jeopardy. She taped three episodes of the  show, which aired on Wednesday, Thursday and Friday, March 21 through 23. While a Calvin student, Guiles worked as a reporter for the Chimes, and when she graduated, she pledged in its pages to one day appear on the show. She went on to earn a master's degree in journalism from Northwestern University and now works as a copy editor for the Washington D.C. company Smart Brief. Recently, Guiles talked about answering questions under pressure, meeting Alex Trebek and the importance of the liberal arts.

How long have you wanted to be on Jeopardy?

Probably since I was a teenager ... . I tried out for Teen Jeopardy and didn’t make it, so I kept trying and trying.

Why did you want to be on Jeopardy?

I’ve always loved watching the show, and I thought it would be fun to compete on it. I would watch it with my family and friends, and I got a lot of questions that they didn’t get. I was always good at trivia. On Jeopardy, they hide a lot of hints in the clues, and I was always good at figuring them out.

They hold an online test, and I did very well at that. When I lived near New York City, I drove down and tried out in person.

Did you have a strategy?

In the first game, you just try to ring in first and on time and make sure that you don’t ring in too early. The second game: that was a rough game. I didn’t know many of the clues. We were all panicking, I think … . I made a really, really good Final Jeopardy wager.

What was it like to be on a game show set?

Definitely, the lights can get to you. It goes by really fast … And meeting the other contestants (is) fun.

He’s really nice. The only time you get to talk to him is during the contestant interviews and while you’re playing the game. He’s really friendly. You can tell he’s been doing this a while because he’s really professional. And really funny too.

Did your English major help you?

Yeah, but you’ll have to watch to find out how. I think going to Calvin, going to a liberal arts college, really helps you out because you study so many different subjects.

Was it worth it?

Totally worth it. Even if I had lost, it would have been a great time. I’ve heard from old friends and a lot of people I haven’t seen in a long time. I toured Mt. Vernon recently, and the tour guide looked at me and said, “Were you on Jeopardy?”

Any advice for game-show hopefuls?

Take the online test. Go for it!

You can read the particulars of Cathy's Jeopardy experience on her blog: http://catherineguiles.com/.