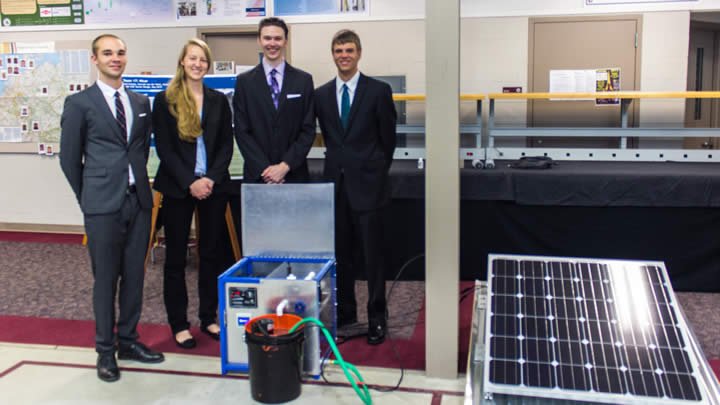 Jesse van der Wees graduated from Calvin this past spring with an engineering degree, shortly after designing a system that could change the lives of those in a country where he spent his childhood.

Van der Wees, a Canadian born in Haiti, spent much of his childhood in Managua, Nicaragua. His family is currently working in Nicaragua with World Renew, an organization serving worldwide “as the development, disaster response and justice arm of the Christian Reformed Church in North America,” focused on improving food security in remote locations of Nicaragua.

Linking his personal ties to Nicaragua and his engineering studies at Calvin, van der Wees and his classmates proposed a practical and personal senior design project last fall. He believes that sustainable management of water, a scarce and valuable resource, is a major challenge of this century for both society and engineers.

Cultivation in the classroom

In his Senior Design Project class (ENGR-339), van der Wees, along with classmates Hannah van der Vorst, Seth Koetje and Dalton Veurink (Team 17) made it their goal to design a system that could disinfect a water supply capable of meeting the needs of a small rural village in Nicaragua.

Stemming from the belief that access to clean water is a basic human right, Senior Design Team 17 stated, “As our group has the knowledge and the means to impact the people of Nicaragua, it is our duty to help any way we can.” They named their project “Agua to NicarAgua, Working to Achieve Clean Water to those in Need.”

Team 17 constructed their prototype design this past spring semester along with an owner’s manual for the system. The final prototype, completed in early May, uses a solar panel to capture energy and then proceeds to use that energy to perform ultraviolet disinfection through the powering of an ultraviolet light. This disinfection unit can be connected to the outlet of any water tank to make the water safe to drink. Designed to be sustainable, the unit can store enough energy to meet the daily drinking water needs of 100 people for five days without sun, with the ability to disinfect much more water on sunny days.

The completed unit was given to World Renew in June and is expected to be shipped down to Nicaragua either late this summer or early fall and installed in Waspam, Nicaragua—one of the many rural villages of the country—by the end of the year.

The group is now witnessing the results of their hard work from the past year. Rewind back to last September when the pledge to reach Nicaragua was established and one can see where Team 17’s dedication to their educational journey began.

During first semester, the group carried out a feasibility study for the project that allowed them to make key design decisions for everything from disinfection methods to energy sources for the project.

In late January, Team 17 had the opportunity to visit Nicaragua to further educate themselves about the challenge they were undertaking, perform water testing and to meet the people their unit would soon be helping. In addition, the group chose a pilot location for their prototype.

“We visited a number of remote communities and each community wanted us to install our design in their town,” said team member Seth Koetje, a native of Grand Rapids, Michigan and current production engineer at LG Chem Michigan Incorporated in Holland, Mich. The group settled on Waspam, as the community in which they would launch their flagship unit.

Located on the east side of the country’s central mountain range, Waspam has a tropical rainforest climate. Daily rainfall and routine tropical storms result in widespread erosion causing high silt content in rivers. This, along with frequent livestock use, compromises rivers as a source of drinking water. The lack of clean and dependable sources of drinking water is an overwhelming concern.

Koetje notes that Waspam’s proximity to the equator and remote location makes it an ideal site for his group’s project. UV disinfection and solar panels are both technologies that require little maintenance compared to most of the alternative water treatment options.

The expectation is that this prototype design will provide water to the community of Waspam for at least the next 10 years. Regular use, routine cleaning, necessary repairs and continuous improvement of the design will help make this a feasible goal.

A vocation to serve

Van der Wees noted that, although their water disinfection unit is effective, it is a simple system, allowing the recipients of the project to quickly familiarize themselves with how the system works, so they are able to make use of it.

“Ideas beget ideas, and then accessibility of the design of our system means that it has the potential to inspire people to take ownership of the technology and adapt it to their own unique and diverse challenges,” said van der Wees.

In the eyes of Team 17, what makes this project a success is not simply the prototype itself, but rather fulfilling their Christian calling to serve.

Ultimately, Team 17 believes the project is a commitment to bettering the world. Said van der Wees: “Engineering is all about serving. Each design has a goal of improving somebody’s life. As Christians, we strive daily to improve the situations of others by serving.”

Van der Wees added, “Through our project, our team was able to learn about other cultures and meet Christians from other parts of the world, which is crucial to our calling as Christians to serve and better the world.

In addition to their findings from their Nicaraguan travels, the group also gained valuable information from Mark van der Wees of World Renew Nicaragua. Father to Jesse van der Wees and the primary client of this senior design project, Mark van der Wees provided valuable insight to the water situation that is faced by the rural villages of Nicaragua and also assisted with design constraints.

The group also worked alongside Water for People, the American Water Works Association designated charity of choice, and the World Health Organization, the directing and coordinating authority for health within the United Nations system.

Perhaps the most valuable contacts for the senior design team were the group’s professors. David Wunder worked with the group as their faculty advisor while Ned Nielsen, Mark Michmerhuizen and Jeremy VanAntwerp served as senior design mentors.

Calvin’s strong emphasis on sustainability, international experiences, mission and service is demonstrated by its engineering department. Paired with advanced education of technology in engineering, this department integrates these values into curriculum, challenging students to learn from a reformed Christian worldview.

Koetje recognizes the contributions of these professors stretch beyond their teachings from the textbook. He says his professors set project expectations and goals and challenged the group with new questions and ideas, but discussed ethics in engineering and how to incorporate faith into different design decisions that were made.

“Our professors provided the foundation for us to build our prototype on through our knowledge built over the past four years along with the necessary resources to tackle issues we ran into that we had not yet learned about in classes," said Koetje.

Koetje says the experiential learning opportunity (senior design projects) allows Calvin engineering students to learn in a familiar classroom setting with the assistance of their professors, but also forces them to be innovative and engage in the real world.

“Engineering is not purely done in a textbook; it requires creativity, collaboration, communication, planning and cooperation between team members. This project, more than any other course I took at Calvin, taught me these important traits of engineering," said Koetje.