Engaging the church in global justice through media 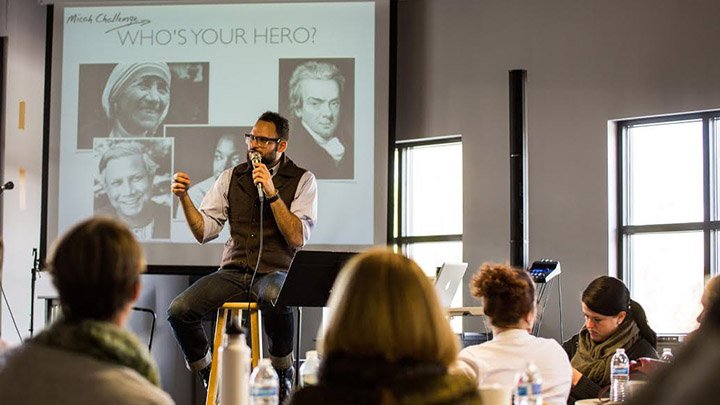 Jason Fileta '05 recently produced a documentary about climate change and the church.

As a child of Egyptian immigrants, Jason Fileta ‘05 grew up deeply aware of global issues such as persecution, violence and hunger. “They were topics of everyday conversation in my house,” he said. “I felt very strongly that God was grieved by all of those things and that I needed to devote a large portion of my energy to tackle those issues.”

From inspiration to action

At first, Fileta wasn’t quite sure how he planned on executing that vision. However, during his senior year at Calvin, Fileta found inspiration from Art Simon, the founder of Bread for the World. When Simon asked Fileta what he wanted to do after graduating, Fileta told Simon he knew what he wanted to do, but the job didn’t exist yet. Simon then looked at Fileta and said, “What are you waiting for? Make it happen.”

So, that’s what Fileta did: after graduating with a bachelor’s degree in sociology, he brought his desire of organizing young people across the United States to raise awareness about global justice issues to the attention of World Renew. He was then hired by World Renew to bring Micah Challenge, a global Christian campaign to end extreme poverty, to the United States.

As the director of Micah Challenge USA since 2009, Fileta has been in charge of the fundraising, strategic planning of the organization’s programs and determining what global issues the organization will address. This includes corresponding and meeting with Micah Challenge partners across the world to see what issues are impacting their communities, and how they would like to see the church of the United States mobilize around those issues.

Keying in on climate change

Fileta’s most recent project is a documentary, For the Love Of, which focuses on global warming and climate change.

“We got a lot of responses saying that food security is becoming an issue, flooding is impacting access to clean water, and people are being displaced from their homes from flooding and famine,” Fileta said. “It was a confirmation for us that this is a very real and urgent issue. We felt like there was a huge opportunity for us to try and activate people’s interest, passion and prayers around the issue.”

Thus, Fileta spent spring and summer of 2015 writing grant proposals for a documentary which would include Christian artists John Mark McMillan, Sarah McMillan, William Matthews and Steven Roach. The artists attended COP21, the 21st Conference of the Parties where leaders across the world gathered in Paris to talk about climate change. From the conference, Fileta's film team captured the artists' reactions and discussions about global climate change, how it affects communities and how the church is involved.

Once they returned from the convention, Fileta worked with the director of the documentary through its launch date, April 22, 2016.

Fileta hopes the documentary speaks to the hearts and minds of Christians across the United States as a call to action. “I love having the chance to communicate issues that I think are really important to God and really important to me personally, and having the opportunity to share about those in a very authentic and meaningful way,” he said.

As someone who pursued a passion rather than an established career, Fileta is thankful for the formative experiences he had at Calvin that gave him the ambition to do so.

“I can very easily say that I would not be doing what I’m doing now if I did not go to Calvin,” he said. “Even though I felt really passionate about social justice and global issues before I went to Calvin, I didn’t have a framework of how to engage in those issues in a meaningful way, or a theological foundation for understanding how much this is part of what it means to follow Jesus, and I learned that at Calvin.”

Fileta encourages college students and Christians across the United States to take action and not wait for opportunities to land in their hands. “You have to fight for what matters,” he said. “If you are passionate about something and you feel that God created you to pursue something, nobody is going to do that for you.”