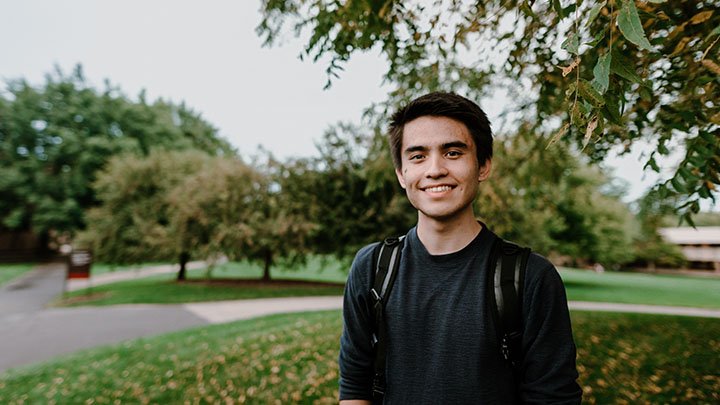 Walking through the halls of Harvard Divinity School, Manato Jansen could see God at work.

This November, Jansen, a senior studying sociology, international development, and geography at Calvin College, attended Harvard Divinity School’s selective Diversity and Explorations (DivEx) program. A three-day, all-expenses-paid visit to the school for students of diverse backgrounds, it provides prospective students the opportunity to meet staff and faculty, attend classes, and interact with their peers.

“Harvard Divinity brought us from across the continental U.S., all with different leadership positions and aspirations in various areas of religion and ethics, and it was just cool to be around 38 other people of my age within my cohort talking about similar subjects,” Jansen said. “The sheer diversity of participants and their passions was really encouraging.”

Talking to the other participants, he was encouraged and awed: “Even if they identified with a different faith, I could see how God was working distinctly in all of them, inspiring them to combat injustice and restore the world.”

Earlier this year, Jansen was made aware of the DivEx program, and decided to apply. “I’ve written a lot of references and recommendations over the years, and I considered this a highly competitive application process,” said Jeffrey Bouman, director of the Service-Learning Center (SLC). “I think highly of Manato, but it was Harvard Divinity and all expenses paid—I was thrilled when he was accepted.

“Opportunity has bred opportunity for him,” he added. “He’s put himself into so many situations where he’s meeting interesting people, both of other faith traditions and Christians, who are interested in diverse religious perspectives—what better place to continue that than at DivEx, in a room full of 38 other college students who care about these questions?”

Jansen has been engaging in interfaith dialogue his entire life: “growing up as a Christian missionary kid in Japan, I was always surrounded by other religions—half of my family were Buddhist and Shinto, so I attended Buddhist funerals and Shinto weddings.”

Coming to Calvin as a first-year student, however, he found it was a dialogue he’d have to initiate. “I was really encouraged by how strong Calvin’s Christian community mindset was, but I also felt inspired to try and bring interfaith to Calvin,” said Jansen. “If we truly want to live out Jesus’ call to love all of our neighbors, we need to engage in dialogue which lets us understand others.”

His efforts—including an attempt to start a student organization and a Facebook page—caught the attention of the SLC. The SLC had recently partnered with Grand Valley State University’s Kaufman Interfaith Institute to start an on-campus interfaith program, so they reached out to him about a job with the center and an internship with Kaufman.

“While Manato didn’t need this job to appear, the timing was quite remarkable,” said Bouman. “It fit him to a tee.”

As interfaith coordinator at the SLC, Jansen has been responsible for the planning and promotion of interfaith events at Calvin. He noted that working through the SLC has had a major impact. “When I first started doing interfaith events, six or seven people would come to every event. Now, Calvin has the the biggest interfaith program participation of all the west Michigan Christian schools—46 students attended our last big event.”

“While the primary focus of the interfaith coordinator is to get Calvin students exposed to members of other religious traditions, Manato’s taken it one step further, and has really been digging into how we can show hospitality for students who are not Christians at Calvin,” said Bouman.