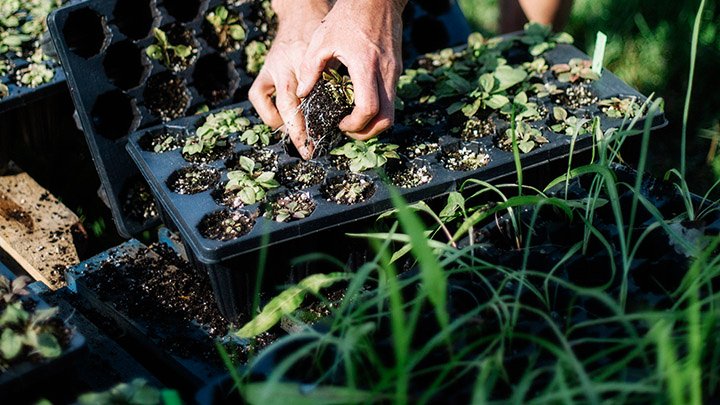 “So many of our Calvin Prison Initiative (CPI) students are who they are today either because they have become Christian, or they have deepened their Christian faith in prison,” said Todd Cioffi, assistant professor and co-director of CPI. “Many of them understand that they have a second chance in a variety of ways, and they want to make it right—in a way, they have been transformed.”

As part of their programming, CPI students have the ability to create and implement ideas for various student organizations. Last year, a group of students got together and proposed to start a garden right on Calvin’s Handlon campus, similar to those on the main campus. “Students coordinated with us (CPI staff), the prison administration, Dave Koetje, and David Dornbos—in charge of community gardening—as well as Ryan Reynolds and Ryan Hartman, Calvin chefs,” said Julie Bylsma, program assistant. “It was quite a big team.”

According to Bylsma, the program has been a huge success. CPI students on the Handlon prison grounds grow fruits and vegetables that are then transported and bought by Calvin Dining Services at market rate. The produce is prepared and served in the dining halls, particularly during the summer months.

With the funds generated by the garden, CPI students have been able to contribute to a non-profit of their choosing. “That was one of the main reasons they started the garden: to be able to donate to people who need it, specifically victims of crimes,” said Bylsma.

“A number of men in the program have been charged with domestic abuse,” explained Bylsma. “Legally they are not allowed to reach out to their victims in any way, but they saw this as a way of giving back to a population that they have hurt in the past.”

Earlier this month Safe Haven’s director of development met with CPI staff to discuss the possibilities for this partnership. “It was a good opportunity to establish a relationship between a prison nonprofit and a victim’s nonprofit, as well as grow the nonprofit community as a whole,” said Bylsma. She believes the mission of CPI aligns well with that of Safe Haven. “[Safe Haven] is trying to use the love of God to end domestic violence,” she said. “We are also trying to use a faith-based approach in education to positively change prison culture and create a more loving environment.”

Grand Rapids does not have any opportunities for offender victim mediation. Cioffi believes this partnership could be an opportunity for restorative justice. “We would hope that these sorts of projects and partnerships could lead to more opportunities for offender victim reconciliation in Michigan—as in the case of some states,” said Cioffi. “Often the assumption is that victims never want to confront or hear from their offender, but that is not always the case. However, the victim has no say in the matter.” He believes many would value an opportunity to put closure on a horrific situation.

“A ministry like Safe Haven is also seeking to transform the lives of victims—transform their situations; in some way, both the victimizer and the victim have been transformed,” said Cioffi. “Now they both hopefully can begin recognizing what healing is, what a second chance means. And, in a very strange way, they are both part of the same cloth.”

This summer will mark the third year of the Calvin Prison Initiative. “We have worked very hard to build strong relationships with the people there, and its paid off,” said Cioffi. “That’s just going to continue.”

CPI students are very invested in this partnership since day one and are excited to see it grow, said Bylsma. “They are the main drivers in getting this off the ground and to completion.”

Bylsma said she can see the relationship between CPI and Safe Haven becoming a long-term partnership: “Ultimately it is up to the students which nonprofit they chose to support through donations, but Safe Haven is a very reputable organization doing good work, so my guess is they will stick with it.”