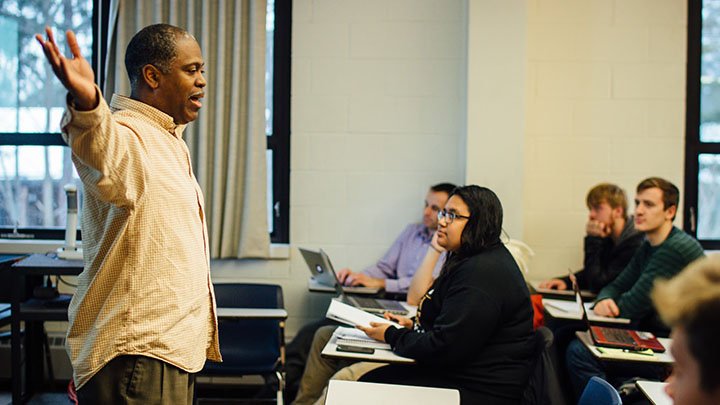 Eric Washington is at the helm of a class that is taking many of his students into uncharted waters.

It’s a Thursday afternoon and 27 students gathered in groups of three or four discuss their reflections on Ta-Nehisi Coates’ “Contemporary Articulation of Black Humanity Under Crisis.”

“I think reading this book I felt sometimes like he was talking to me. I think it was very similar with my parents,” said one student. “My parents grew up in what we call the ghetto, saw shootings every day like he did. Then, I was born, they got out of Chicago and moved to a small Midwest town and he [Coates’ son] grew up away from city life as well.”

“I grew up in Ypsilanti, the majority of people are not white,” stated another student. “I felt like I kind of knew what I was talking about when I started taking this class, felt really enlightened by this book. The theme that stood out was the presence of fear in the home.”

Another student added: “My reaction to it [the fear Coates talks about] was surprise, not something I’d thought about before. The music, the dress. I felt apathetic, some of us created aspects because of fear.”

Calvin College professor of history Eric Washington is at the helm of a class that is taking many of his students into uncharted waters. It’s a new offering at Calvin which he describes as “a little six-week journey into the Black humanities.”

The class, which fulfills the Cross-Cultural Engagement requirement for students, is IDIS-290: “Black Lives Matter (No#).”

Exploring the history behind the hashtag

“I’m only spending one day on the particular movement that is Black Lives Matter. It’s not a point to talk about the movement, as a movement emanating from the hashtag campaign,” said Washington. “If we start there, then we miss this whole history of black voices that have been saying basically the same thing since the 17th century.”

Washington’s class has reviewed autobiographical writings, which includes a slave narrative, poetry, a piece of prose, and has also looked at more contemporary writings. Washington says the point is to help students think critically about and engage thoughtfully in discussion of the meaning and relevance of Black humanity historically and at present.

The rich discussion in class has been a highlight for many students like Anna Little, a junior studying electrical engineering from Ypsilanti (Lincoln High School).

“I could read a book and write a response by myself, but bouncing ideas off of others and hearing things that I wouldn’t have thought of has been really helpful too.”

“If a student walks away valorizing the experiences of people of African descent in this country, then I’ll be satisfied. Not to be dismissive, not to objectify, but to place inherent value on the collective experiences of a group of people in this country. Because that’s going to spill over into issues dealing with Native Americans, Latinos, women, gays and lesbians and trans and queer. It’s going to traverse the entire landscape, the entire social landscape of this country. It will help us empathize. You don’t have to agree with every point or every movement, but it’s just to valorize people.”

And the rich historical context packed into the six-week course is helping students become equipped to engage thoughtful conversations outside the classroom.

“With the media and the news as it is now, the way they report is very surface level and that can be very divisive,” said Little. “People take that as the only information there is about a movement and make their opinions based on partial information and neither [person] is able to talk about how to bridge that gap. Starting from the beginning and working your way to the present is important.”

“We have to get beyond our intellectual laziness and engage, rather than simply ingest information,” added Washington.

And as much as Washington was able to teach his students through the various readings, in-depth discussions and multicultural experiences, he admits he learned a lot as well.

“One thing I’ve learned is the value of listening, even more,” said Washington. “I have to hear from students who come from different backgrounds and if I’m listening other students will take their cues to listen as well. I’m sure I’ve had, and have right now, students who aren’t sold on Black Lives Matter, and that’s fine, but I really want students to express their discomfort, express their ambiguity or ambivalence.”

And at the end of the six-week experience and after all of the rich in-class discussions, Washington leaves his class with one last challenge.

“I hope you all gained from this experience, these conversations. From listening,” said Washington as he closed out his class on Thursday, December 8. “One goal [of this course] is that you become empathetic toward Black people and all people of color, especially if you self-identify as white, which most of you do in this class. You can stand and look at me and call me professor [today], then if I’m not in professorial garb, if I started to wear a hoodie today out in the street and had a cap over my head, you might think about my black body differently than you think about it now. That’s the danger. So I hope this particular class will give you pause, give you some pause and to give a person of color the benefit of the doubt.”

The discussion will continue in Washington’s sections of IDIS-290 he’ll be teaching this spring.