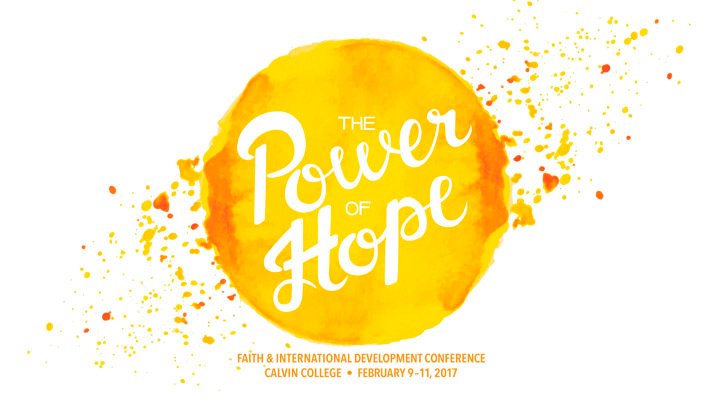 "Romans 12:12 says, “Be joyful in hope, patient in affliction, faithful in prayer.” The organizers of this year's Faith and International Development Conference recognize that the brokenness in the world today has exhausted many under the weight of injustice. In response, they have decided to take an honest look at brokenness, both in the United States and around the world, and discuss the hope that can be found in its midst."

“The Power of Hope”

The 12th annual FIDC will take place at Calvin this Feb. 9-11, themed “The Power of Hope.” Six speakers will be addressing the topics of employment, agriculture, public health, climate change, immigration and hope in development. Between listening to speakers, conference participants will engage in breakout sessions, worship, organization tables and meals together.

Junior Katie Ulrich, co-director of the FIDC, chose the theme “The Power of Hope” with fellow co-director sophomore Kaitlyn Kline last summer with timely intention. “We were thinking a lot about how it can be hard to do development work when you’re confronted with poverty, violence and injustice; they’re heavy, difficult things to deal with,” Ulrich said. “But we serve a God who can do so much more than we can ask or imagine, so we settled on the idea of hope, and how we can still have hope with these difficult issues. It felt like a very relevant theme in many ways.”

This student-led conference began in 2006 when two Calvin students wanted a conference at Calvin that was geared toward students and informed by people working in the international development field. In slightly more than a decade, the conference has grown to include 50-70 volunteers, as well as more than 30 nonprofit organization sponsors.

The mission of FIDC is to educate, inspire and equip students. “We want the FIDC to teach students about development, to inspire them and to give them hope for the work they are doing and going into,” Ulrich said. “That’s why it’s great that we have over 30 nonprofit organizations involved, because students get to connect with these organizations, and some end up getting internships.”

“More generally, FIDC is a great opportunity for students to learn about international development outside of the classroom, which always puts things in a new perspective,” Ulrich said. “You get to meet other students who are interested in the same things as you. It brings people together who are passionate about the same things.”

New to the FIDC, a panel and documentary on climate change and its effects on the poor will be included in this year’s conference. More information is available on the FIDC website.