Concerts in context for 25 years 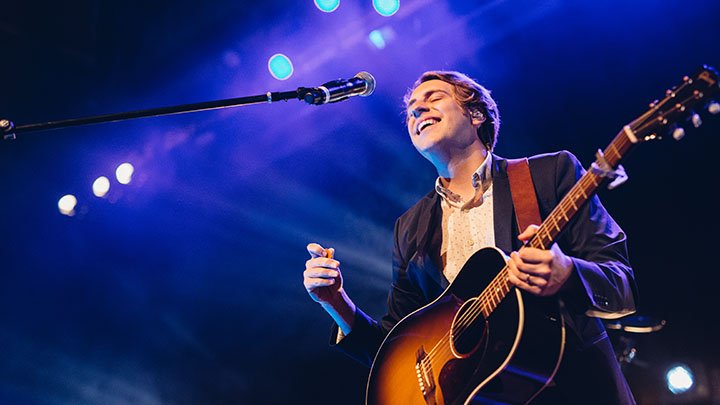 In 2016, Ben Rector played a sold out show at the Covenant Fine Arts Center Auditorium.

“The challenge for a Calvin student after graduation is always: How do I work for the kingdom of God in the vocation that I've chosen in a genuine and effective way?” said Ken Heffner, director of the Student Activities Office. “I'm always looking for artists who do just that, and can be an example to a Calvin audience.”

Heffner said Student Activities is on the lookout for people who are Christian but not doing music for a solely Christian audience. “I'm always very fascinated when an artist who is a Christian has figured out how to do their work well in the Public Square,” he said.

Heffner said his vision for the popular arts is it being something students engage with like they would their labs in the sciences. “This is like a laboratory for the humanities,” he said. “We have held to that idea from the beginning, and I think it is uniquely Calvin.”

The Student Activities Office has always seen concerts and movies not as extra-curricular but curricular, said Heffner.  “That means we cannot just “do” concerts, we have to contextualize them,” he said. The Student Activities Offices tries to teach students how to ask questions and be attentive and to move from a posture of being a passive consumer to being attentive and engaged. “In doing that, the experience becomes more grand,” he explained.

Throughout the years, Calvin has hosted a number of prominent artists. In the 90s Student Activities brought both Dave Matthews, a very important artist at the time, and Hootie and the Blowfish, a then new band that went on to become widely popular. “Because we are so intentional about choosing artists who we think will matter, sometimes we get them at just the right time,” said Heffner. “When we booked FUN in 2012, they weren't all that big yet, but they went on to be the band of the summer that year.”

Sufjan Stevens played at Calvin when he was still a college student and in a different band. Student Activities was able to form a relationship with him and bring him back as a solo artist several times since because of it.  Another group Student Activities has been able to form a relationship with is Over the Rhine, who first came in the 90s and have been a regular ever since. They even returned for an acoustic Christmas concert December 2, 2017.

Heffner highlighted a couple of his favorite artists throughout his 25 years as Student Activities director. “Sigur Ros is probably one of my all-time favorite shows as well as Sylvan Esso’s concert,” he said.

“Because we are working in the popular arts, we have to change constantly,” said Heffner. “We have to keep finding what is happening in the music world. We are always trying to sort out who are the important artists—or who are going to be important—and who are not.”

A space to dive deeper

Heffner said he wants the Calvin audience to be able to sort out the good from the bad at the end of the day. “Yes, we have been doing concerts for 25 years, but those concerts are never just concerts, they are concerts in their context,” explained Heffner. “That's why we have playbills and discussions at almost every show, as a way for anybody to dive in deeper.”

“At Student Activities we are trying to move away from just consuming movies and concerts and then walking away, to investing in them and bringing a little bit to the experience.”

In February 2018, students can anticipate artists like Rostam, a co-founder of the band Vampire Weekend, Valerie June, The Mowgli's and The Lone Bellow.