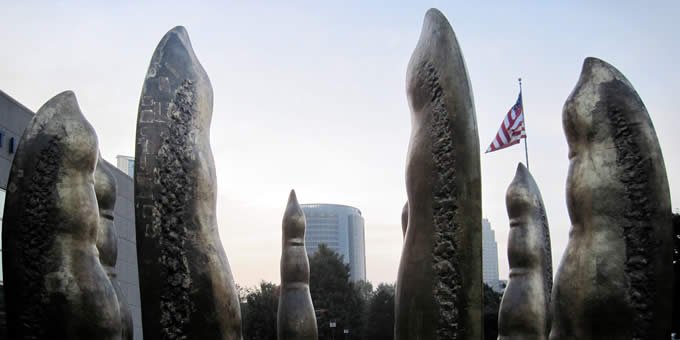 A Calvin music professor collaborates with a Romanian sculptor.

David Fuentes had tried before—back in grad school— to compose music about the biblical mountain, “but it didn’t quite … ,” he summarized. So, when Fuentes, a Calvin professor of music, heard about the gold fingers that were coming to Grand Rapids for ArtPrize, he saw his second chance.

"Liviu” is Liviu Mocan, a Romanian sculptor, and the ten gold fingers he created (from fiberglass coated with gold leaf) stand in a circle on the lawn beside the Gerald R. Ford Museum in downtown Grand Rapids. The fingers are tall—around 16 feet high—and they curve inward, as though they were attached to two cupped hands.

Inside the circle, the fingers are smooth, and there are seats at their bases where a visitor can perch. Outside, the pieces are rough, and they have sharp edges. “Inside, it’s love. Outside, it’s judgment,” said Mocan. “You decide where to place yourself.”

The installation, titled invitation/decalogue, is Mocan’s realization of a concept that visited him 17 years ago: “God, the creator of (the) human body and the human moral, gave us 10 fingers and 10 Commandments,” he said. Invitation/ decalogue is a piece that unites the concepts of mercy and judgment.

Fuentes hopes to bring those concepts together in the music he created for Mocan’s sculpture, which he has been working on since last May. The composition, written for brass and percussion, refers to both Exodus 19, where God delivers the 10 Commandments to the children of Israel, and Psalm 19, where David asks for cleansing.

The finished work is titled “Clouds, Radiance, Sweetness, Gold and Fire,” and Fuentes is hoping he hit all the right notes: “You’ve heard my music many times. Do you hear any judgment at all?” he quizzed Mocan.

Mocan is pleased. “I am deeply impressed by David’s creation,” he said. “I am so honored that he came along with his love for God and his passion and talent. It is so complex,” he said of the music.

Invitation/ decalogue was originally created for celebration of John Calvin’s 500th birthday in Geneva, and it has traveled elsewhere.. People often have powerful reactions to standing or sitting inside the sculpture, Mocan said: “I will never forget. It was a lady in Bellflower that said, ‘I feel happy here. I don’t ever want to leave.’”

Fuentes just wants to do justice to Mocan’s work. Three musical ensembles will join together in front of the Ford Museum to play “Clouds, Radiance, Sweetness, Gold and Fire”: The Calvin Community Symphony, an 11-member brass group from Western Michigan University and a group of Caledonia-based high school percussionists named Strike. The combined ensemble, under the direction of Calvin orchestra director Robert Nordling, will perform at 3 p.m. and 3:45 p.m. on Sunday, September 26 in front of the Ford Museum.

The collaborators are looking forward to bringing their two art forms together. Because logistics have prevented the three ensembles from rehearsing together until the day of the performance, the music had to be extra playable, Fuentes said, while also sounding grand enough to do justice to Liviu's work. "The one exception is a particularly snarly trombone section about halfway through the piece," he said. "We call it ‘the Obama lines.’ We just keep telling them, ‘Yes, you can!’”

The two artists are optimistic, but admit they'd like some help with the weather. “Tell everybody to pray for good weather—plenty of sunshine,” Fuentes said. 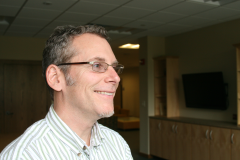 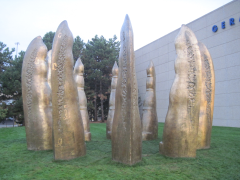 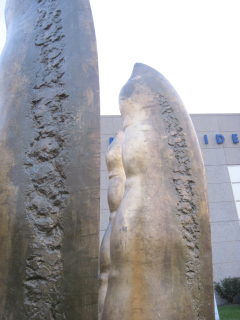 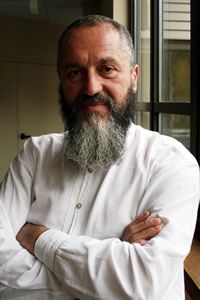 Videographers captured highlights of the performance of "Clouds, Radiance, Sweetness, Gold and Fire."

Liviu Mocan grew up in communist Romania, in Cluj-Napoca in Transylvania. “My parents were very simple people, and they loved God. They were very hospitable …,” he said. “I grew up in that kind of family, and I was extremely blessed by that.”

Mocan believes that his art is a vital expression of his faith. "When my hands touch soft clay, I touch God’s hands. God’s hands are there, waiting for me.” The sculptor was not influenced by any particular artist or school. “I don’t want to be famous, to be rich. I love this light that is in me to be shown … I am a sculptor, but I am much more” he said. “I am a sculpture.”

When Mocan and Fuentes met, Fuentes had just finished working with another resident of Cluj-Napoca: the playwright Andras Visky, who spent 2009–2010 at Calvin as the holder of the William Spoelhof Teacher-Scholar-in-Residence Chair. “And they’re good friends,” Fuentes said of Mocan and Visky.