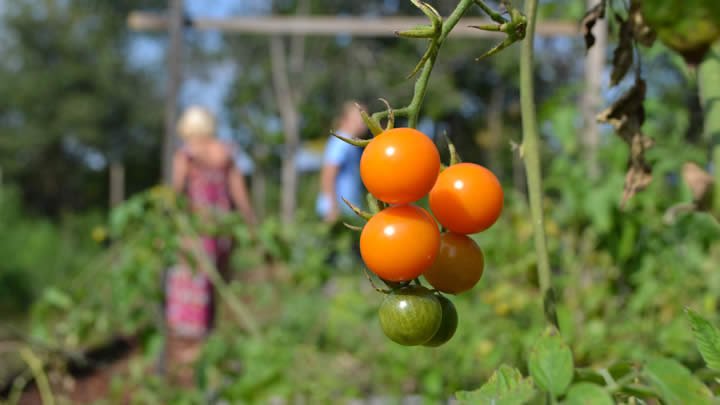 If you’ve been to one of Calvin’s dining halls lately, chances are your salad or vegetable side contained produce grown right here on campus.

Calvin’s community gardens—tended by students—have existed since 2009. But only recently, faculty and students approached Calvin’s head chef with the idea of incorporating the produce from the gardens into the meals Calvin serves.

Chef Ian Ramirez was happy to help. He now uses the garden for catering purposes as well as for student meals, culling food from greens to squash blossoms in small quantities.

“We’ll talk with him in November and we’ll ask, ‘What do you want next year?’” said student gardener Janaya Crevier, a senior, who helps to run the garden along with senior Peter Cahill.

Cahill said he has a long-held passion for gardening.

“I grew up with my mom always having a garden,” Cahill said. “We lived in five places, but my mom always built a new garden. Here, I put a lot of thought into the sustainability aspect and how to make it a sustainable system. I learned that from her.”

Crevier found the garden work appealing because she viewed it as the culmination of concepts she has learned at Calvin, including the renewal of creation.

“I don’t always get a chance to be involved in a healing process so directly,” she said. “This job popped up, and since I love being outside, I took it. Beyond the job itself, this is a powerful place of healing for me, for the soil and for anyone else who comes into this space.”

There are two gardens. The original, Knollcrest East Garden, is located by the Knollcrest East apartments across East Beltline from the main campus. These plots are rented out to members of the Calvin community. In April 2014, the second community garden, Hampshire Garden, was opened next to the fieldhouse.

The western half of the garden, approximately the same size as the eastern cultivated half, is currently in the development process. The dream is to include greenhouse and orchard space to grow pears, plums, peaches and cherries, as well as an upper part with a community gathering space, and a lower part near the stream that will be a meditative garden.

Crevier said she views the gardens as a case study in what Calvin students are doing about global climate issues.

“It sort of builds on this being a healing space,” she said. “This is a springboard to tell other stories about what Calvin is doing in caring for the earth.” 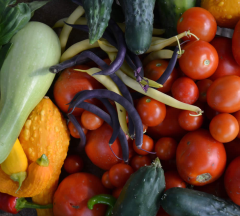 Produce from the community garden 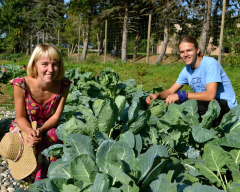 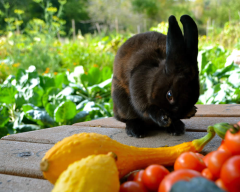 A rabbit eyes produce in the community garden. 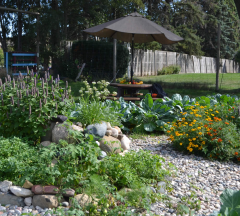