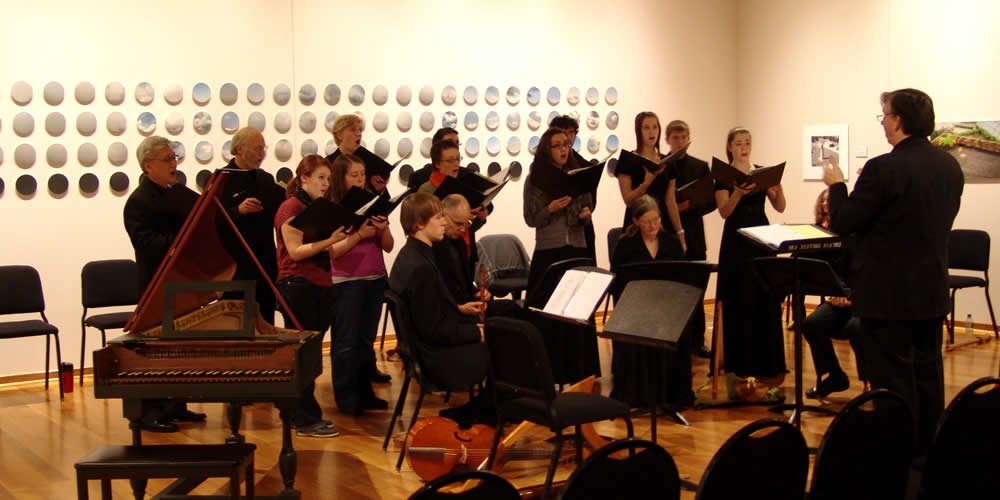 On Tuesday, Nov. 29, Calvin’s early music ensemble Collegium Musicum returned to the Center Art Gallery for their second performance in that venue.

Collegium Musicum specializes in what its conductor, Calvin music professor Timothy Steele calls “early music,” or Western music of the Medieval, Renaissance and Baroque periods. In order to achieve a sound as close to the original as possible, Steele, along with the Calvin staff, faculty and students who make up Collegium, performs this music on the instruments of the period—rebecs, recorders, violas de gamba, vielles and harpsichords—some of which are so obscure they have been custom made for the ensemble.

Tuesday’s concert was dedicated to the work of Guillaume Du Fay, whom Steele considers the 15th century’s most famous composer. A formal innovator with great versatility, Du Fay composed in sacred styles like the motet but also composed extensively in the courtly ballade and the popular rondeau styles explored in Collegium’s 12 selections.

Steele locates Du Fay’s genius in his ability to weave the music of these very different spheres into a vibrant and unified sound of his own.

“This composer seems to have come along as the Middle Ages gave way to the Renaissance,” Steele said. “You can hear in his music an awareness of the new sounds of his age. So his music has a kind of modern feel to it, even though it’s 500 years old.”

The singers and musicians were surrounded by the art of Rebecca Cummins, whose work invokes an ancient imaging technique known as camera obscura. One of Cummins’ pieces, a hollowed-out, vellum-bound dictionary with a curved lens in the center of its cover, stood at the far end of the gallery and displayed an upside-down image of the ensemble for any listener who might have peered into it during the performance.

The circular images produced by camera obscura were traded for the rectangle as old aesthetic values were broken down and remade during the Renaissance, said Joel Zwart, curator of the gallery. “So a viewfinder today is a square,” Zwart said. “In a weird way, what [Cummins] is doing in her work is looking back at the way of looking at things.”

Collegium’s concert looked back at the same point in history when music was undergoing a similar transformation. “In a weird way, there’s a connection,” Zwart said.

Back in time, a new sound

But Collegium is more than a history project for its members. “This music is just as engaging and entertaining as any music we might choose to pay attention to or perform,” Steele said. “It’s thrilling to me to give students a chance to interact with this music and hopefully develop a love for it.”

Junior soprano Chelsea LaJoye was enthusiastic about the chance to explore music much different from what she typically performs with Capella, one of Calvin’s student choirs. “We never, ever get to sing this kind of music,” she said. “It’s a unique opportunity. It’s really exciting.”

Professor of music emeritus Calvin Stapert founded Collegium in the fall of 1970, a time, he said, when interest in early music blossomed. Stapert continues to play and sing with the group. “It started with just a recorder quartet,” he said. “Little by little, we added instruments. Then students started getting credit for it—and I started getting teaching credit for it,” he laughed.

Stapert is drawn to early music, he said, by “the sheer sounds of the instruments—the clarity, the intimacy of the music. It works differently rhythmically, melodically, harmonically. In other words, fresh sounds for jaded modern ears.”

The a cappella Marian chants that bookended the concert filled the long gallery, aided by the 25-foot ceiling opening over the performers. Steele called the gallery “a wonderfully sympathetic environment for music-making.”

The gallery was not intentionally designed as a concert venue, Zwart explained: “It was what we called a happy accident.”

Since discovering this hidden trait during last year’s Fall Music Festival, Zwart and the music department have been conspiring to host more performances there: “It’s something that I’m excited about because we’d hoped, moving back to this building, that there would be a way to start to integrate the visual arts with the other fine arts.”

For Collegium’s needs, the gallery is close to ideal. Steele mused that its acoustic quality resembles that of a 15th-century French chapel: “I like to think about it as similar to the kind of space where the music might have been performed originally,” he said. 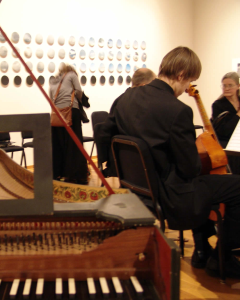 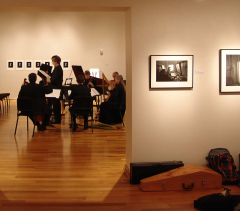