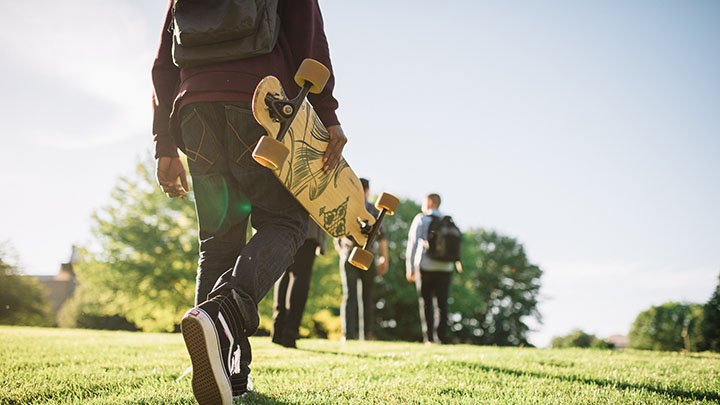 The Class of 2021 will begin their journey at Calvin College in August.

Calvin’s class of 2021 will be traveling from all over the nation and world to attend Calvin this fall, bringing with them the highest average GPA on record for an incoming class of students at 3.75. According to Tom Van Eck, associate director of enrollment research, the past four incoming classes have averaged a 3.7.

In fall 2016, U.S. News & World Report ranked Calvin the #1 college in the Midwest (tied with Taylor University) and it became Calvin’s Class of 2021’s #1 pick as well—for strong academics, but also for Calvin’s variety of opportunities to grow personally, socially and spiritually.

Matthew Boelkins wanted to choose a college with a great engineering program, but he also desired a community in which he would be able to grow spiritually and socially. From Charlotte Christian High School in Charlotte, North Carolina, Boelkins decided against larger state school options after his visit to Calvin and acceptance as a research fellow for his first year. “When I visited, I went into a first-year class and saw a professor teaching, not a TA, which I thought was really cool. I like the smaller size and individual focus, as opposed to a big public school,” he said. Boelkins looks forward to engaging with the Calvin community and exploring the various social opportunities at Calvin.

Taylor Ten Pas, a graduate of Lynden Christian High School in Lynden, Washington, was drawn to Calvin’s community-feel as well. “Knowing people’s names and stories was something I wanted in college, and I also wanted to be in classrooms with professors that share the same faith and ideals as me,” she said. Additionally, her experiences in visiting Calvin and interacting with her soon-to-be teammates on the cross-country team left a strong impression on her. “I loved the atmosphere of Calvin during my visit, and the cross-country team is great. I was also interested in the medical program because of how strong Calvin’s sciences are,” she said. Ten Pas intends on studying biochemistry for the pre-med track and will be doing phage research with the biology department during her first year.

Paul Atherley, a graduate from Los Osos High School in Rancho Cucamonga, California, was drawn to Calvin because of Calvin’s new five-year master’s program in accounting. After applying to 25 schools, Atherley ultimately decided on Calvin due to factors including the smaller setting, financial aid benefits, the distinctive interim term and impressive programs. Although Atherley was not particularly seeking a Christian college, his visit this past April solidified his feeling that Calvin was the right choice for him. Atherley hopes to become involved in the multicultural student development office, participate in intramurals, and sing in a choir as well—a passion he began pursuing his senior year of high school. What he looks forward to most is winter. “I want to experience the snow—everyone says I’ll be completely unprepared and freeze, but I’m ready for it,” he said.

Victoria Castellanos, also from California, graduated from Temple City High School in Temple City. She intends on pursuing three passions: Japanese, theater and marketing. Originally, Castellanos was looking into liberal arts schools on the east coast, but quickly became impressed with Calvin upon discovering it. During her process of choosing Calvin, she felt very welcomed by the community. “Calvin was much friendlier with me than other schools, and they gave me a lot of support during my time as Rose Queen,” she said. Castellanos was the 2017 California Rose Tournament Queen, chosen based on public speaking ability, poise, academic achievement, and community and school involvement. She looks forward to joining choir and clubs at Calvin while learning more about the Christian faith.

Justin Varineau, a graduate from Grand Rapids Christian High School, is among the top six students of his class, five of whom will be attending Calvin in the fall. He plans on studying mathematics and secondary education and will be running cross-country, as he did in high school. “Coming in, I knew I wanted to run cross-country, so hanging out with the team and meeting the coaches was influential,” Varineau said. “My Friday’s visit went especially well—everything worked together to form my decision: chapel was great, and I felt a major sense of belonging. The dining food was even good!” Varineau is very excited to get involved in Bible study and potentially become a Barnabas, a spiritual leader on one of Calvin’s residence hall floors, during his sophomore year. He also looks forward to joining clubs, participating in dorm activities, meeting new people and exploring all that Calvin has to offer.

Russ Bloem, vice president of enrollment management says that while academics are taken very seriously at Calvin College, so is holistic growth. Students are encouraged to engage in community, serve others and deepen their Christian faith.

“It’s exciting to see excellent students from around the corner and across the globe coming to Calvin every year. And this incoming class represents the latest edition of great students who are ready to be equipped to think deeply, act justly and live wholeheartedly as Christ’s agents of renewal in the world,” said Bloem. “With an enduring commitment to our compelling mission, Calvin continues to attract a diverse group of students who desire both a challenging and supportive academic community.”