Christian art beyond the borders 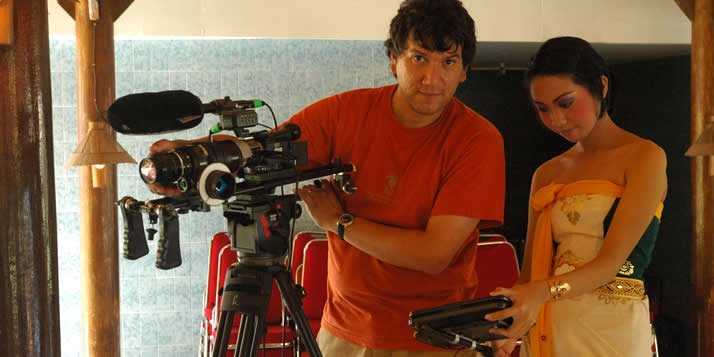 Two Calvin professors joined colleagues from other Christian universities for a two-week trip to Indonesia that both said will impact their teaching and their scholarship for years to come.

The excursion was part of a new collaboration between the Nagel Institute for the Study of World Christianity at Calvin College and the Council for Christian Colleges and Universities (CCCU).

Calvin's Jo-Ann Van Reeuwyk, professor of art education and a fiber artist, and Daniel Garcia, professor of communication arts and sciences and film maker, joined colleagues from a variety of CCCU schools for the pilot project, called Christianity and the Visual Arts.

In Indonesia the North American artists connected with leaders of the Asian Christian Artists Association (ACAA), founded in 1978, and for two weeks the group traveled around Indonesia, learning more about each other as artists and Christians.

It was an experience both Calvin professors said exceeded their expectations.

“Meeting the people was the highlight,” said Garcia. “Seeing how they navigate their culture as Christians, but also seeing how they struggle. They are not a majority in their culture. They live in vastly different circumstances from us. Yet you come together to realize each other's differences and to be enriched by each other's differences. But we also have a common faith and a common passion for art.”

“The group really bonded,” she said. “I think some of the people who organized the trip were a little nervous about putting a bunch of artists together, but I think that's actually the best group of people you could put together. We bonded on a faith level—we could openly talk about our religion as artists—but we also were all visual artists in orientation, so we responded to each other and to what we were seeing.”

For both Van Reeuwyk and Garcia the trip left them wanting more.

“Indonesia has it all but we barely scratched the surface,” said Van Reeuwyk. “There is so much more to discover and experience in Indonesia alone much less the rest of Asia that puts our faith in new contexts and perhaps even to the test. I know for a fact that the experience will be changing my artwork as well as my teaching.”

Indeed multiculturalism has been a big focus of the Calvin art education program for some 15 years now, said Van Reeuwyk, and the recent trip to Indonesia has given her some good ideas for how to do that kind of education even better.

“Our students,” she said, “will be in classrooms where they will need to meet the needs of kids from all over the world. In the past I think we have addressed that, but not as deeply as we could. This (trip) has given me fresh ways of looking at the substance of how people are alike and how they are different. It was an eye-opening trip on many levels.”

No bad experiences in Bali

The trip began with a week in Yogyakarta, the ancient cultural capital in central Java and the only province in Indonesia that is still formally governed by a pre-colonial Sultanate. It is also known, said Van Reeuwyk, as a center of classical Javanese fine art and culture, including batik, dance, drama, music, poetry and puppet shows.

The next week was spent on Bali, an island just east of Java that has moved from an agriculture-based economy to a tourism-based economy and has become one of Indonesia’s wealthiest regions, despite suffering significant setbacks in both 2002 and 2005 as the result of terrorist bombings.

Said Garcia: “There is no way to make a bad experience in Bali. It's an amazing place.”

That amazing place was made even more hospitable, said Garcia, by the participants’ home during their stay: Dhyana Pura (“Place of the Spirit“), a conference center run by the Balinese Christian community that offers both studio and exhibition space. There they visited artists' studios and exchanged artistic techniques and approaches. They also experimented with some of the Balinese art forms through facilitated workshops, and they spent time in a studio brainstorming and beginning artistic works.

“The art was even more profuse and prevalent on Bali,” said Van Reeuwyk. “Out of this has grown the Bali Christian Artists Association which although a small group has had particularly wide accomplishments.”

In Yogyakarta they visited world heritage sites, ancient temples and local galleries and studios. They also participated in discussions with local Christian leaders, university professors and members of the area government and civil society.

Nagel Institute director Joel Carpenter, who also went on the trip, said the goal of the project was to push North American Christian scholars out into the new Christian frontiers of the global south and east, so they could learn from eminent Christian thinkers in the regions.

He noted that the project recognized and highlighted the power of visual arts as a Christian endeavor, and that Indonesia, the world’s fourth-largest country, was an appropriate place for the trip.

The arts, he said, have become a key way for Indonesian Christians to “express heartaches and hope, justice and reconciliation, and the gospel's witness for peace.”

The hope, he said, in sending North American, Christian artists to Indonesia to work with their Asian counterparts was to inspire artists on both continents to express the new global character of Christianity.

Seeing culture through eyes of others

Both Garcia and Van Reeuwyk are excited about the next portion of the project as each participant, including the Calvin professors, now will work on a piece of art or a written reflection on “The Many Languages of Faith in the Visual Arts” as a response to the artists’ time together in Indonesia. The works will be consolidated to produce a traveling visual arts exhibition and an accompanying interpretive catalog.

Next year the Nagel Institute plans to partner with the CCCU for a project on Christianity and political thought, to be held in Cape Town, South Africa. 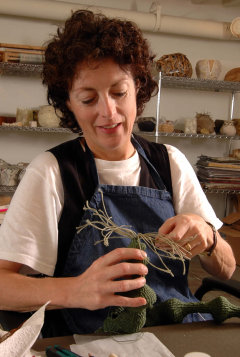 Jo-Ann Van Reeuwyk teaches a variety of art courses at Calvin, including introductory art and specialized courses. She is a 1983 graduate of Calvin who went on to earn an advanced degree in art education at Simon Fraser University in her native Canada in 1989. She has also earned the equivalent of an MFA during her years of teaching. A tenured professor, she is in charge of Calvin's art education program and also teaches in the studio program. In addition she maintains a fiber studio in downtown Grand Rapids where she thinks a great deal about and creates sculptural forms using old basketry techniques dealing with the concept of sacred space.

Daniel Garcia teaches introductory and advanced video production as well as screenwriting. Born in Trujillo, Peru, he obtained his B.A. at the Pontific Catholic University of Peru, then spent several years teaching high school literature and language, serving as a theatre director and writer and more, before pursuing graduate studies in communications and film. Garcia has written and directed numerous short films, most recently a documentary about the lives of minority inmates in the Peruvian prison Lurigancho. He is working on a documentary on what he calls “the inspiring tradition of philanthropy in West Michigan” with plans for that project to air locally later in 2008.