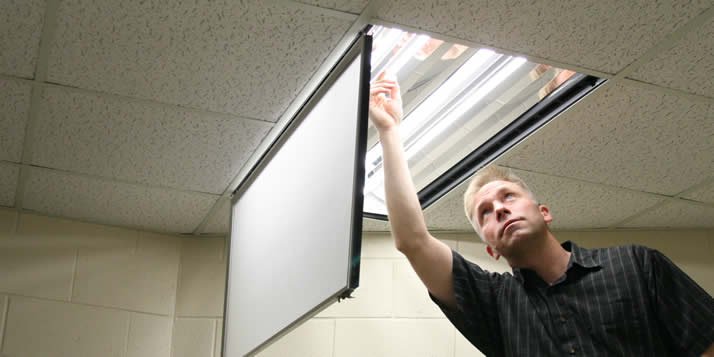 The Calvin Energy Recovery Fund has retrofitted North Hall with new lighting that will save the college thousands.

North Hall, home to six academic departments, is also home to state-of-the-art energy efficiency thanks to a recently-finished lighting project.

The project, coming in around $57,000, was not an inexpensive investment, but it is a sustainable one. The cost was alleviated by $7,000 in utility rebates from Consumers Energy, and the cost savings—an estimated $13,000 a year—will put Calvin in the black on the project after three and a half years.

Plans for the lighting project were initiated by the Calvin Energy Recovery Fund (CERF), which was launched in 2010 to improve energy efficiency and reduce carbon dioxide emissions on campus.

“I was just thrilled that we could get it done in a week’s time,” Heun said.

Since the cost savings from all CERF projects are routed back into the fund for five years after the project’s payoff, the financial benefits of the North Hall lighting project will be reserved to fuel future energy-saving projects.

Eric Kamstra, manager of the special programs of the Calvin Annual Fund, including CERF, is optimistic about future CERF projects. “I think giving to CERF is one of the best ways to support Calvin because, not only are you making a gift back to your alma mater, but you’re making a gift that keeps giving for years to come,” he said.

CERF is governed by Calvin’s Environmental Stewardship Committee, Heun and a student intern (Mike Troupos in 2011–12 and Ryan Hoff in 2012–13.) They  invite the Calvin community and the general public to submit project proposals. Visit calvin.edu/go/cerf to propose a project of your own.