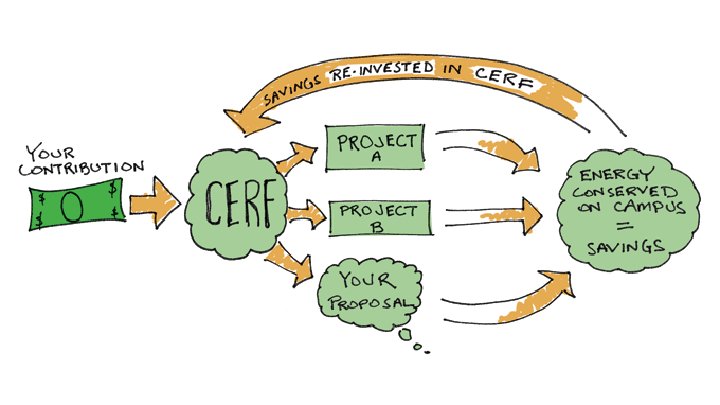 In the fall of 2008, Matt Heun challenged his upper-level engineering students with a question: “What would it take to implement a Green Revolving Fund at Calvin?”

Nearly seven years later—and just five years since the first project was implemented—that fund has provided resources for eight energy-saving projects on the campus resulting in savings of one million kilowatt-hours of electricity, 1.5 million gallons of water, 770 metric tons of carbon dioxide emissions and $100,000.

These milestones are being celebrated with some campus-wide events, including a scavenger hunt highlighting the energy-saving projects, a lights-out brownout and a presentation by Heun.

“What is surprising and extremely gratifying is the speed at which we’ve been able to generate these savings,” said Heun, Calvin Energy Recovery Fund (CERF) supervisor.

The work of students

Getting the fund approved in 2009 was the work of students, who took Heun’s initial challenge seriously. “Students made presentations on their own to the administration, encouraging the establishment of the fund,” said Heun.

Fifty thousand dollars of seed money supported the first project in 2010, a software package that automatically put campus computers on power-save mode based on usage.

Other larger projects were made possible due to these savings and the assistance of donors.

“The reason for the speed with which we’ve been able to get projects accomplished is completely due to donor interest,” said Heun. “We would have been able to do some of the projects, but they would not have happened so fast. It’s been an easy conversation to have with potential donors. I highlight the fact that any gift to CERF has a built-in matching gift and will in-turn allow us to do other projects. It’s been an amazing blessing.”

Some of the other large projects that have been completed include exchanging the lighting in the Huizenga Tennis and Track Center with LED fixtures, installing low-flow showerheads in the residence halls, and replacing lighting and affixing occupancy sensors in North Hall. Low-flow showerheads in the apartments and improved lighting in the residence buildings hallways are scheduled for this summer.

Heun believes that CERF was the impetus to get beyond hurdles that usually get in the way of energy-efficiency efforts. According to Heun, high capital cost, organizational decision-making, lack of tracking savings and using the savings to make purchases that actually require more energy can all be impediments to making positive changes.

He also credits CERF with significantly raising energy awareness on campus. “CERF provides us with a way to track and highlight energy savings to the community,” he said. “Without CERF energy savings get lost in the general budget.”

Analyzing and tallying up those savings along the way has been accomplished by student interns, who have also been influenced by their work.

“I went into CERF knowing that sustainability was important, but not realizing how each person can make a difference,” said second-year intern John Sherwood. “It’s been a great opportunity for me to see how much a home or campus wastes just by leaving the lights on and how changes to a building or lifestyle can really benefit society.

“Before CERF I was not totally sure what I wanted to do, but now that I’ve worked with Professor Heun and learned about sustainability and how energy is generated and used, I’m sure that this is the path that God wants me on,” said Sherwood, who is headed to Clemson University for graduate studies in environmental engineering.

Intern Lauren Grimley, a junior engineering major, has also seen the impact of CERF. “Through this work, I’ve learned about the technical side of energy and worked to put it into an easy-to-grasp narrative,” she said. “We tell people that there are changes you can make that significantly affect resources without changing your lifestyle dramatically. It’s not something to be feared, but embraced.”

In addition to the work of the students, Heun is also grateful to the college’s physical plant, which has been supportive of the efforts.

“CERF is awesome,” said Jack Phillips, head of the mechanical division of Calvin’s physical plant. “It can track and show off what we do. It’s easy to lose track of the cumulative effects of what we’ve done, but CERF tracks all of that. It proves what we say we’re going to do in terms of saving energy.”

Heun is encouraged by the support. “It’s easy to get pessimistic about the future of energy,” he said. “But CERF is a reason for hope. When financial incentives and good intentions align, that’s when cool things can happen.”

To learn more and celebrate CERF’s achievements, come to the Bytwerk Theater on May 7 at 3:30 p.m. for the Calvin Environmental Assessment Program’s poster session, including a keynote address by Matt Heun. 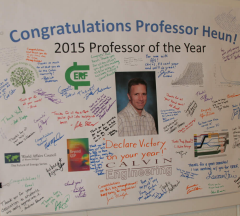 Matt Heun was named 2015 Professor of the Year.

Professor of the Year

On Wednesday, May 6, a Renewable Energy Organization meeting was interrupted when droves of students walked into the classroom and surprised engineering professor Matt Heun with the news that he was Professor of the Year.

The Professor of the Year award is awarded annually by Calvin’s senior class. This year, the process of selection started in March with nominations, which were winnowed by student leaders. Seniors then vote on a top-five list of candidates.