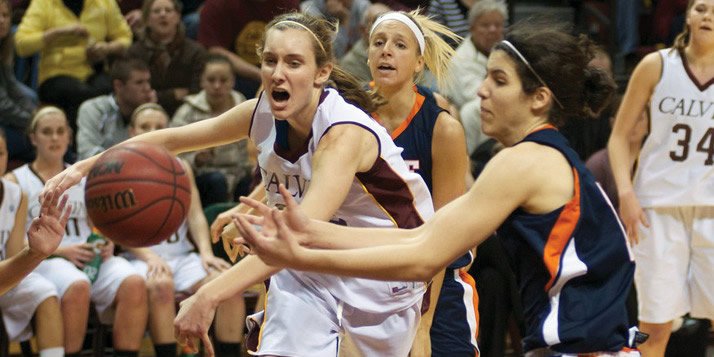 A standout on the court and in the classroom, Carissa Verkaik has been named an academic All-American.

Junior Carissa Verkaik was sitting in the Spoelhof Fieldhouse Complex, working on her homework, when her coach, John Ross, found her and handed her a slip of paper. “I guess when I first read it, I didn’t know how big of an honor it was,” said Verkaik, a center on Calvin’s women’s basketball team.

Verkaik had been named a Capital One Division III Academic All-American in women’s basketball. She is the second person in Calvin women’s basketball history to earn that distinction, which recognizes an athlete’s achievements both on the court and in the classroom.

On and off the court

“You have to work very hard, both athletically and academically, to get that honor,” said women’s coach John Ross. He praised her contribution to the success of the Calvin women’s team, which this season has gone 23–1 overall. Verkaik is averaging 18.5 points and 8.5 rebounds a game and connecting on 56.5 percent of her field goal attempts. She  averages four blocks per game—100 overall—and is ranked nationally in both field goal percentage and blocked shots-per-game average.

“She’s a really great offensive and defensive threat on the floor. She’s a team leader,” Ross said. “She’s a real role model, and she cares about everyone on the team.”

Grateful for the individual honor, Verkaik loves being a member of the team: “I think it’s a huge blessing to be able to play with 15 girls who love basketball as much as you do,” she said.

A 6–2 Holland, Mich., native, Verkaik started her roundball career playing alongside two other basketball lovers: her sisters Breanna and Kally. Their dad, who played basketball and ran track at Calvin, signed up the three sisters for a three-on-three basketball tournament. “We were really excited to try something new,” Verkaik recalled. “I think we did well. We didn’t win, but we did well.” She continued playing basketball throughout middle school (during which time she grew to six feet) and high school, where she sometimes played guard: “When we played taller teams, it was easier for me to take the ball up because I could see over them,” Verkaik said.

She likes anchoring the Calvin team at center: “I think there’s times when I get the ball, and I can see Jill (Thomas) and Alli (Wolffis) coming down the lane, and I know where I’m going to throw it. And that’s one of the greatest feelings—passing the ball because they’re going to make a layup,” she said. She also likes playing with her sister Breanna, a guard with the Knights.  (Verkaik is also a member of the Calvin women’s track and field team; she captured the league title in the high jump to earn a spot on the All-MIAA women’s track and field team.)

An elementary education major, Verkaik, maintains a 3.67 grade point average. A year ago, she was named to the MIAA Academic Honor Roll.
“Carissa is very encouraging and community minded,” said dean of education James Rooks. “She’s going to be a wonderful teacher.”

Verkaik volunteers with the Special Olympics and with Youth Unlimited. “She’s an outstanding student: very hard working with lots of integrity,” Rooks said. “I think that Carissa kind of approaches her studies just like she does basketball. She’s very open to learning and working things out. And if things don’t work out, she’s very persevering to trying them again.”

Verkaik is grateful for the support of her family: Her father, Mike, currently coaches the Holland Christian High School women’s team, for which her sister Kally plays guard. (Her mother’s name is Dawn.) “My parents go to every single game, she said, “And so do my grandparents.”

The definition of gifting

The inspiration for much of what she achieves, Verkaik said, comes from her brother, Chad, who has a mental disability. “Growing up with him kind of put a passion in my heart to help kids,” she said. “He’s definitely a blessing in all of our lives as a family. Chad (shows) us what a childlike faith is because he doesn’t care what people think of him. In church, he sings his lungs out; it doesn’t matter what key he’s in. And that’s what worship is supposed to be about. And he forgives. If someone offends him, he runs up the next day and gives them a hug.”

She considers her brother a singularly gifted person: “It’s all on your perspective on what a gift is. People don’t recognize the inner gifting—or it’s harder for them to see,” she said. 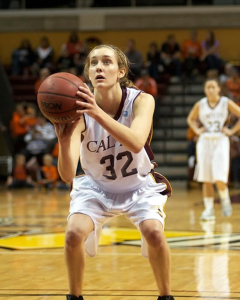