Cancer researcher brings research back to the basics 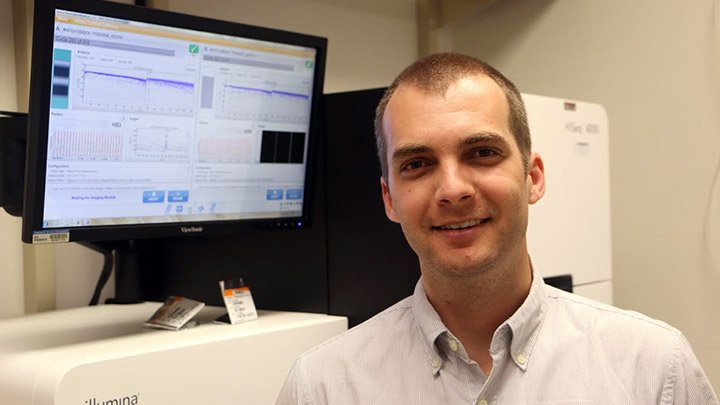 From being interested in math and science in high school to now working at the National Cancer Institute as a postdoctoral fellow, Calvin alumnus Mitchell Machiela’s passions and opportunities increased in each educational transition along the way.

“At Calvin I did student research for two or three summers, and that’s where I got introduced to research as a possibility for a career. I later worked for a year at the Van Andel Institute in downtown Grand Rapids as a lab technician. I was working in a genetics lab there, so that’s where my interest in genetics came.”

After earning a degree in biology and Spanish from Calvin in 2005, Machiela completed a masters degree in epidemiology at the University of Michigan and doctor of science degree at Harvard University School of Public Health. It was at Harvard where his passions were honed in more specifically to cancer research, as he studied under a doctoral advisor who was researching cancer himself.

Machiela started his work as a postdoctoral fellow in August 2012 in the Laboratory of Genetic Susceptibility at the National Cancer Institute. He focuses on genome-wide association studies.

“We look at people who don’t have cancer [versus] a group that has a specific type of cancer. We generally find a small handful to several dozen positions in the genome that are associated with cancer risk. We are some of the earlier pioneers trying to see how genetic variation is associated with cancer risk or potential outcomes. We think that this may help explain why some individuals develop cancer and some do not.”

Since finishing his undergraduate studies at Calvin, Machiela has released 26 publications and anticipates releasing a handful more before wrapping up his fellowship. He hopes to apply for research positions in the next year or two to continue researching cancer genetics, where he believes his skill set is best matched with his interest.

Machiela believes Calvin prepared him in a number of ways for this work. “You’re exposed to a lot of different things [at Calvin] and encouraged to go to a deeper level in your thinking about those things. It was nice to have a mentor help walk me through the whole process [of research] as I had successes and failures to build upon and learn from to go a particular direction.”

Being a Spanish major, he also greatly appreciated the semester he spent in Honduras his senior year as he loved being immersed in the Spanish language and exploring the country.

He and his wife, Rebekah, will be celebrating their ten-year wedding anniversary this August. They have three children: Simon (4 years), Lydia (2 years) and Henry (2 months). Machiela enjoys cycling and road biking in his free time and biked the “Civil War Century” route, about 100 miles roundtrip, in June 2016.

Despite the viciousness of cancer, Machiela remains optimistic in his research. “The next big discovery could be just around the corner, but we’re probably still in the earlier years of understanding this. I’m hopeful that a lot of this research will lead to some type of targeted prevention for people who are at high risk. We are certainly making progress on personalized medicine and personalized oncology for cancers.”