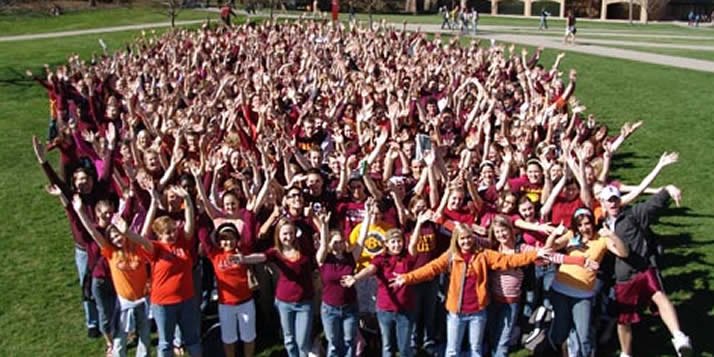 "It was humbling to end a long fundraising effort knowing that Calvin alumni and friends believe in the institution enough to support it so fully, not only with financial gifts but also gifts of time, talents and prayers,” said Calvin College president Gaylen Byker.

Byker noted that the campaign—No Greater Task: Hearts and Minds Renewing God's World—began and ended with a pair of dramatic events.

"The campaign actually began in 2001 as a series of feasibility studies,” he said.

"We paused,” he said, “not knowing exactly how to proceed, but knowing that our nation and our world had experienced events which would leave none of us the same.”

The closing of the Campaign for Calvin College came, added Byker, in the midst of one of the most uncertain economic moments in the past 70 years.

"It was a pair of unsettling bookends to our fundraising effort,” he said, "yet, in between these two monumental time periods were many moments for which Calvin is grateful.

"We certainly are grateful for the successful completion of the campaign's fundraising priorities, such as the many new scholarships established for students for generations to come, new endowed faculty chairs and new facilities. But there also is gratitude for the deepened relationships we have developed with dedicated alumni and friends who have made Calvin a giving priority and will continue to do so.”

Byker noted that while new buildings, such as the $50 million Spoelhof Fieldhouse Complex, were a big part of the campaign goal, almost $45 million in the campaign was dedicated to scholarships and financial aid ($22 million) and faculty research and development ($22 million). And the college exceeded its fundraising goals in both those areas, raising $22.3 million and adding over 300 new scholarships for students, while raising $25.6 million for faculty research and development.

"It doesn't do much good,” said Byker, “to have state-of-the-art facilities like the Spoelhof Fieldhouse Complex if we can't keep Calvin affordable and if we can't equip our faculty well. So those two priorities were pretty critical to the success of the campaign.”

Calvin vice president for advancement Ken Erffmeyer said that the campaign will support the college for decades to come, particularly the college’s students.

"Campaign priorities such as scholarships and financial aid directly benefit students,” he said, “but something like the new Spoelhof Fieldhouse Complex does as well. Even an area like the money raised for faculty research will benefit our students. It's gratifying to meet the campaign goal and know that future generations of Calvin students will benefit as a result.”

Now that the campaign has concluded, Byker said, Calvin needs to sustain the momentum gained during the two-plus years of the public phase of the campaign.

"Financial security at a place like Calvin is not assured,” said Byker. "We need to continue to make people aware of Calvin’s impact and how gifts to this place multiply through our graduates. And we need to raise money for a new Campus Commons. That was in our campaign priorities, but the FAC (Fine Arts Center) renovation was funded ahead of it. A new Campus Commons will be an important building for us for years to come, and we need to raise the money for it soon.”

In addition to raising money for projects such as the Campus Commons, Erffmeyer said fundraising, especially via the Calvin Annual Fund, which directly supports students, is going to be key to Calvin's day-to-day activities.

"We have one of the lowest tuition rates and one of the lowest endowment-per-student rates of any school we compete with,” he said. "Campaigns like the one we just finished, and the fundraising we do through the Annual Fund, provide the momentum and support for the things we can't do with tuition.”

Erffmeyer, who came to Calvin in the summer of 2008, at the halfway mark of the public phase of the campaign, noted that when the campaign began, the changing economy already was impacting Calvin. The more recent economic downturn made the campaign priorities even more significant.

"Our faculty members,” he said, “need funding to continue doing the research and writing that distinguishes them as leaders in their fields. Our students, who come from a variety of backgrounds, need scholarship dollars to benefit from a Calvin education."

He and Byker both believe the college was able to communicate its vision to sufficient numbers of its supporters during the campaign and must continue to do so to ensure future fundraising success.

"It's the priority thing," Byker said. "I keep coming back to that. Going forward Calvin has to become a high priority for a significant number of people. I think that began in this campaign, and we need that to continue.”

Byker noted too that Calvin's "ripple message" resonated with donors.

"Our message from beginning to end was that a gift to Calvin had a ripple effect,” he said, “but even more than a ripple effect. It's a multiplier. Giving to Calvin is a way to support many, many other projects and organizations because Calvin students become graduates making a difference in the world as part of those projects and organizations. That was a positive message during the campaign, and I hope we are able to communicate to people the many ways in which Calvin continues to fulfill its mission.”