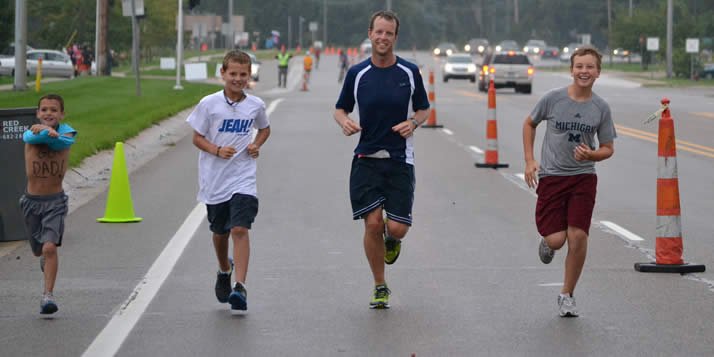 Gelderloos' three sons run the final 1/4 mile with their dad.

With light rain tumbling down and his three sons running by his side, Calvin College swim coach Dan Gelderloos realized a longtime dream last weekend, completing the 2.4 mile swim, 112 mile bike and 26.2 mile Michigan Titanium Triathlon in a time just over 12 hours.

Preparing for the race

The triathlon was held at official “Ironman” distance and allowed the 40-year old Gelderloos to achieve a goal he had set his eyes on long ago. “I’ve always wanted to do an Ironman Triathlon (held every year in Hawaii)  but the expense to fly there and do it was too much,” said Gelderloos. “When I found out that there was going to be a local triathlon at the Ironman distance, I heard it calling my name. I’m not getting any younger and with the fact that it was being held in my own back yard, it was time to get going.”

Gelderloos did just that this summer, training arduously for the grueling event that is capped off by a full marathon. A native of Upper Arlington, Ohio, Gelderloos was often seen logging long miles on the bike or on the run through searing temperatures this summer.

”You get used to it (the heat) after awhile,” said Gelderloos, a 1994 Calvin College graduate who has been the head swim coach at his alma mater for the past 16 years. “I think it helped me prepare for the actual race.”

Although the Michigan Titanium Triathlon held in Grand Rapids Township and its northern surrounding townships began in pleasant 60-degree temperatures with the morning swim in Versluis Lake, the weather quickly cranked up into the mid-80’s and later the 90’s during the biking and running portions of the race.

Strong off the blocks

Gelderloos cruised through the swim portion, finishing first out of the water in 47 minutes before taking about 13 minutes of time to grab a bite to eat and change into his biking gear. One of roughly 100 competitors in the water, Gelderloos was surprised to be in the lead as he closed in on the beach. “I thought I would be in the top group of swimmers but I didn’t expect to be in the lead.  When I looked to my left and saw that I was in the lead, I said ‘alright,’ I’ll take that.”

The smooth swim quickly transitioned into a mind-numbing bike ride that included loops through Greenville and Cedar Springs and then back down through Rockford and into Grand Rapids Township.

“The bike was really tough,” admitted Gelderloos. “It was hot, there were hills and there was a lot of wind. Some of the other guys on the course came up near me and told me it was the toughest bike course they’ve ever been on. When I finished the bike, I wasn’t sure how I would run five miles, let alone an entire marathon.”

Fueled by peanut butter and jelly sandwiches during his changeover from the bike-to-run, Gelderloos found a second wind and began to make his way through the hilly marathon course that enveloped much of Grand River Drive.

“I just kind of waddled along and started to feel my legs again,” he said. “I started talking to some people along the way and started to enjoy myself.  It also helped that the sun went behind the clouds and it cooled off.”

With his wife Vicki snapping photos in rapid fashion, Gelderloos ran the final quarter mile of the race with his three sons, Ryan (13), Will (11) and Luke (8). Together all four crossed the finish line. “I feel a lot better than I thought I would,” said Gelderloos shortly after finishing the race. “To be honest I don’t think I will be doing another one of these (races) but I’m very pleased with the result.”

His official time of 12:00.16 was good for 13th place overall including fifth in his age group (40-44).  Of the approximate 100 competitors that began the race, only 37 finished the race according to the final on-line results.

When asked how he would translate some of the lessons learned during the competition to his exercise classes and his swim team, Gelderloos was succinct. “I’m planning on getting back into the office tomorrow and writing some notes down,” he said. “In a race like this, you learn to feel. You learn to feel what it’s like to be thirsty, hungry and tired and you learn how to respond to that. I’m hoping to teach some of those things to my students.” 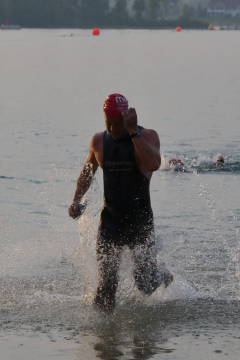 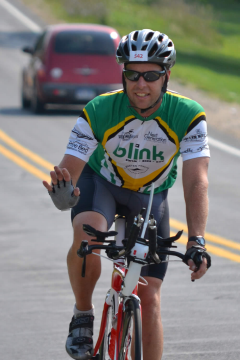 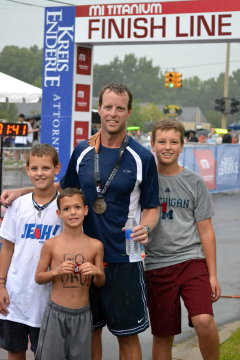 While Dan Gelderloos was completing his first triathlon at an Ironman distance, Calvin political science professor Simona Goi was prepping to complete her first next summer.

Goi did so by taking second place in the female division of the Michigan Titanium Half-Ironman which was held concurrently with the Michigan Titanium Iron-distance event. Goi completed the 1.2 mile swim, 56 mile bike, 13.1 mile run competition in a time of 5:15.43. Her time was a personal-best by ten minutes as she had competed at the same distance on four prior occasions.

"It was a bit of a surprise to take second place but it was also exciting," said Goi of her finish at the Michigan Titanium Half-Ironman. "I had ridden the bike course before so it was nice to be in a familiar setting. The run was hard because the weather got so hot in the afternoon. Given the (warm) conditions, I was real happy with how everything went."

A faculty member of the Calvin political science department since 1997, Goi is no stranger to taking on big challenges. In 2007, she scaled the 20,320 ft. high summit of Denali, also known as Mt. McKinley located in Alaska. She began her triathlon career five years ago. "I like the outdoors and at first I started doing adventure races," said Goi. "Some of my friends encouraged me to try a triathlon and I've been going ever since." Some of her triathlon journeys have taken her to the Tri del Sol Triathlon in Middleville, the Revolutions3 Half Ironman in Sandusky, Ohio, and the Breakwater Half-Ironman in Petoskey.

She's also been going long distance on the run as she has competed in a handful of marathons and plans to run in the New York Marathon this coming November. Goi also excels in the bike but admits that the water was an obstacle at first for her. "I wasn't sure about swimming in open water," she said. "I had to get over that fear at first."

The Lake Placid Ironman next summer will begin in Mirror Lake which, according to Goi, "is very smooth." The bike course is "very hilly and will take a lot of work," she said.

The fact the competition will be held in the shadows of the unforgettable 1980 Winter Olympic Games which featured the "Miracle on Ice" by the United States ice hockey team as well as five gold medals by U.S. speed skater Eric Heiden is also "inspiring," said Goi.

Like all serious triathletes, preparing to compete includes a focus on nutrition. "I've worked hard on nutrition when I train," said Goi. "When I race, I go with a special liquid drink that has the nutrients I need. When I go to the longer distance next year, I may have to try some solid foods."

Managing injuries is also a key she said. "I try to manage any injuries by paying attention to something as soon as something starts to go wrong," she said. "I've worked with a chiropractor, used acupuncture and other treatments when I've had injuries. It takes a village to manage your fitness."

In the end, Goi sees the sport of triathlon as a way to meet new people. "Competing in triathlons has been a great way to meet different people from all walks of life," she said. "It helps you see the world from a different perspective. I also love talking to my Calvin students about triathlons. Some of them also compete in the sport and I encourage them to keep it up. It's a great addition to one's life."