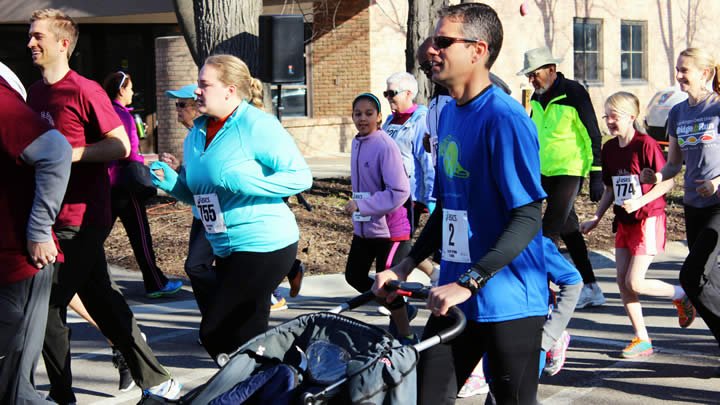 Whether it’s chasing a college chaplain, competing for a trophy with the president’s left running shoe on it, being able to say you took a morning run through three different cities or breaking an Olympian’s course record, the Calvin 5k Spring Classic has something for you.

The event, which takes place at 9 a.m. on Saturday, April 25, marks the race’s 25th anniversary. The executive director of the college’s alumni association Michael Van Denend has been involved with the race since its inception. He said what started as a student run event known as the Scholarship Run sure has changed over the years.

“Twenty-five years of this and it’s just grown exponentially—all the time, the amount of money that’s raised, the number of corporate sponsors and the number of participants,” said Van Denend.

What was once a race of 50 runners has now become a major Calvin annual event of more than 1,300 runners per year. The event is now called the Spring Classic and the proceeds from the race fund between six and eight scholarships for Calvin students each year. The scholarships start at $1,500 for the first year they are given and extend as a $1,000 scholarship for a second year.

And Calvin has seen the event attract more and more people from the greater Grand Rapids community over the years. “It’s really turned into a community relations event too because so many people from the community come,” said Van Denend. “They get to see the Calvin campus because we have the registration in the Spoelhof Fieldhouse Complex so they get to see that facility. There’s a real emphasis on getting families to run together.”

This year the race will include many different “challenges” designed to get different community groups involved. Area schools are encouraged to participate in the D&W Fresh Market School Challenge. The school with the most participants will win a cash prize and all participants in this challenge will be entered into a drawing for a new bike courtesy of Aspen Investment Management and village Bike Fitness.

Another option for families with young children is the Karen Muyskens Family Fun Run, an indoor run taking place in the Huizenga Tennis and Track Center for children ages 3-9. This race is dedicated to the memory of Calvin chemistry professor Karen Muyskens. Gymco, the corporate sponsor for the Fun Run, will be sending staff to work with the children on basic techniques and calisthenics.

To encourage Calvin students to participate, this year will feature the new Knights4Life Chaplain’s Chase. This event is a relay race that students can run in a team of three with each team member running one mile. The winning team will receive three free parking passes from campus safety. The President’s Shoe Challenge for Calvin faculty and staff will be taking place again this year with both the fastest team and the one with the most participants receiving the president's left and right shoe trophies.

And, the Striders Corporate Challenge will provide co-workers from businesses throughout the community an opportunity to compete for a $250 prize (determined by cross country scoring).

In addition, the hand cycling division, added just last year, is back in 2015.

All participants are entered into drawings for prizes provided by corporate sponsors, including a grill, an iPad and $100 bills.

The course record is held by former Olympian and current Calvin cross country coach Brian Diemer. "He started the race, shook hands with everybody and then he ran and he still won and set a course record," said Van Denend.

Volunteers are still needed and get a free shirt.