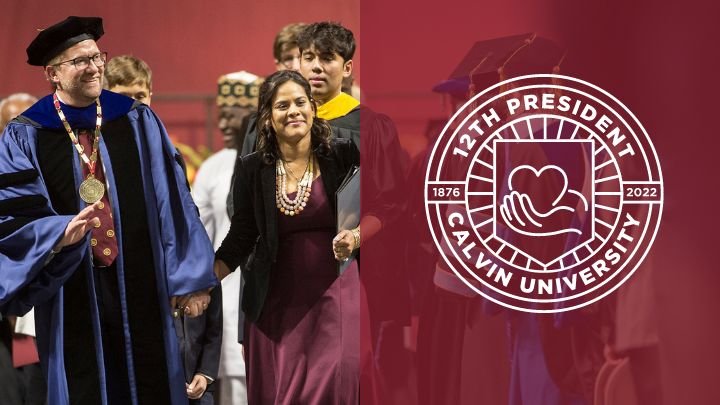 View photo galleries from the Inauguration and related events.

The Inauguration Event provided an opportunity for the broader community to get to know the Boer family better, and especially the university’s 12th president. The physical program even included notations in the margins indicating the intentionality for each element and person selected to participate.

Danladi Verheijen, a close friend of Boer’s, provided a formal introduction of the new president. The two have known each other since grade school in Nigeria and attended Calvin together. Verheijen rattled off Boer’s record of innovation and career accomplishments, but he also spent as much time or more stressing Dr. Boer’s desire to help elevate others.

“I’ve yet to meet someone who gives so freely of his time to others and is always trying to connect people with opportunities. Wiebe lives to help people,” said Verheijen.

Nain Miranda, the university’s student body president, has already witnessed this desire to help others succeed in his brief time knowing Dr. Boer. Miranda animated this point during his words of encouragement to the president.

“Since the day we met, you have always sought student opinion and have focused on ways to improve the student experience. And not only have you sought for the opinion, but you have consciously taken action by providing solutions.”

One example cited by Miranda was “when Student Senate mentioned that it would be great to have more student org funding, you decided to double it for the year!”

While Boer is still getting his feet wet in higher education administration, having come from outside the space, Verheijen noted that this is actually not unfamiliar territory for Boer to inhabit.

“Before his role at All-On he had never worked in the energy sector. But he humbly immersed himself in that community and learned from experts around him until All-On became a leading Off-grid impact fund in the region. Wiebe thrives on confronting challenges head-on and solving complex problems. In every challenge, he sees the opportunity to build and/or transform.”

That’s what Boer sees now in his first four months on the job at Calvin—an opportunity for Calvin to build on its strengths, “because what we have here, and even more importantly who we have here, are assuredly promising,” said Boer.

Looking out at a crowd of 2,000-plus that included family from near and far, dozens of delegates, hundreds of faculty, staff, and students, invested alumni and friends of the university and west Michigan community members, Boer expressed his gratitude for all in attendance and his appreciation for the Calvin community, the Christian Reformed Church, the west Michigan community, and the many partners around the corner and across the globe. He then delivered his inaugural address “The Greatest Generation is Now.”

Continuing a legacy of belonging

He discussed his vision for Calvin to be a welcoming place for all to experience the powerful transformational impact of the university’s mission. He told the story of his parents, Jan and Frances, coming to Calvin as immigrants, and the story of he and his now wife Joanna coming to Calvin from overseas with little legacy and little money, and he talked about how all of them found a place to belong at Calvin. He emphasized Calvin continuing to strive to be a welcoming place for its neighbors near and far.

“There are more Jans and Franceses starting this year, as there are every year. There are more Wiebes and Joannas, too. And there will be for many years to come. Calvin is now appealing to more communities who face challenges to integration and social elevation in American society and beyond,” said Boer.

Look no further than the university’s enrollment for proof of this enduring commitment to expanding welcome to more and more communities. In 2022, Calvin’s 3,200 students hail from nearly every U.S. state, five Canadian provinces, and 55 countries around the world. The university also continues to reach new learners of all ages and in all spaces, expanding its offerings to graduate-level and certificate-seeking students, and expanding its programming both online and behind bars.

Getting comfortable in the missing middle

Boer spent the middle portion of his speech recognizing the challenges facing higher education and the elevated level of polarization in recent years.

He then emphasized the strength of Calvin’s mission to not only weather but boldly push for renewal in these polarizing times ... “Calvin must define our own place in the world, and not let the world define us with their labels.

“Calvin has always played a role in society in what we have called the messy middle, and that I would instead like us to call ‘the missing middle.’ This is a place that is getting harder and harder to hold in our current local and global political context. He talked about the terms liberal and conservative and said “these are just monolithic labels that society tries to put on us.”

Boer then said “What Calvin needs to focus on is what author Jim Collins calls, ‘the genius of and, instead of the tyranny of or.’” He then listed some of the things Calvin can find the genius of.

“As a committed Christian university and community, why can’t we be: Dutch and Diverse; Excellent and Exciting; Conservative and Controversial; Progressive and Pious; Gritty and Grace-Filled; Orthodox and Original; Renewed and Renewable?”

“We should leverage these tensions as bridges to one another—to be the institution that influences the world by calling us back from division and calling us together through dialogue,” said Boer.

Staying true to the mission

“Because this mission produces alumni who are taught how to think rather than what to think. How to reach hearts rather than break them. How to seek and elevate goodness rather than counterfeit or bury it. How to lift each other up rather than hold each other down.”

Boer finished his address by calling Calvin to renew its call to global good by learning from and esteeming the many cultures represented at Calvin and through reaching out in deeper engagement with Calvin’s local and global community for mutual flourishing. He also challenged the community to renew its commitment to engaging with the church, “showing that our mission is not just abstract, but put into action for the welfare of the CRC (Christian Reformed Church), the city of Grand Rapids, and communities around the globe.”

He also called Calvin to be innovative in its approach to the future of higher education, flexible in meeting challenges, unwavering in its Christian and academic commitments, and to do better at telling the Calvin story, “sharing what unites us all.”

The Greatest Generation is Now

He said all of this work is centered on equipping agents of renewal, and this generation of mission bearers is ready to go.

“Talk to a Calvin student today and you’ll see they are eager to make this world a better place, and to do that now—as radical agents of renewal. They are not going to wait for it to happen,” said Boer. “I would argue that with a Calvin education they have all it takes to be an even greater generation than that of my parents.”

Boer then recalled the words of Jesus in John 14:12: “Very truly I tell you, whoever believes in me will do the works I have been doing, and they will do even greater things than these.”

From Boer’s perspective, “the greatest generation is now!”

“Today’s Calvin students are a part of the greatest generation, and they will go on to do even more world-shattering things than their predecessors. So, it is our role here to make them ready.”

“For the chance to serve this university, I am overwhelmed and humbled,” added Boer. “Let me close by saying thank you for the opportunity to be the twelfth president of Calvin University. Now, let’s roll up our sleeves and get started.”