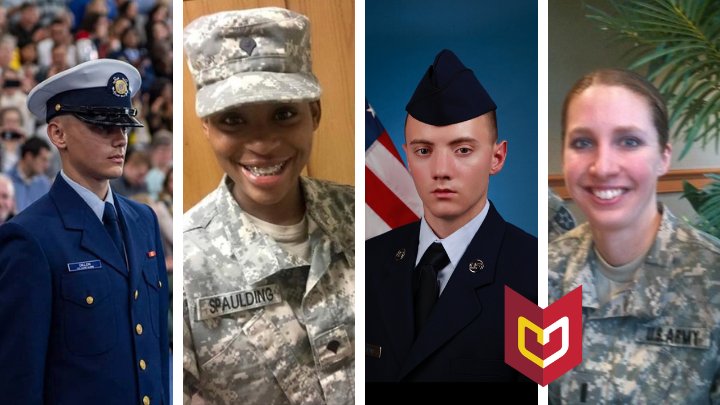 On Friday, November 11, in honor of Veterans Day in the United States and Remembrance Day in Canada, the Calvin community is holding a flag-raising ceremony at noon. The university is taking the opportunity to honor those Calvin students who have served or are currently serving in the U.S. military. This year, 18 students at Calvin fit this category—an institutional high.

Petty Officer Jesse Dillon, Ashley Spaulding, SPC, Max Stebbins, and Sara Campbell are four of the veterans studying at Calvin. They recently shared why they chose to enlist in the military, enroll at Calvin, and what they hope to do in the future.

Where did you serve and what was your position?

Jesse: I serve at USCG Marine Safety Unit Savannah in Savannah, GA. I work as a marine science technician, participating in pollution response, facility regulation, and disaster contingency planning. One of my roles is as a Marine Transportation System Recovery Unit Leader, in charge of tracking damage to port facilities in a hurricane or other natural disaster and delivering a plan to the command for how to best return maritime commerce to pre-storm status.

Max: I served at Grand Forks Air Force Base, North Dakota, and Al Udeid Air Base, Qatar. I achieved the rank of Staff Sergeant during my six years in the Air Force, and I served as a Security Forces BDOC Controller.

Sara: I served in the Army Nurse Corps. I started as a 66H, which is the designation for medical/surgical nursing. I did my basic training in San Antonio, Texas and my first duty station was Fort Benning, Georgia where I worked on an inpatient floor. I decided to specialize in operating room (OR) nursing, so I attended the perioperative nursing course in Fort Lewis, Washington. I returned to Fort Benning where I worked in the OR for a while and then moved to Fort Carson, Colorado.

Why did you choose to serve your country?

Jesse: I chose to enlist as a way to work in pollution response and further my training in incident command system qualifications. It has also been a great opportunity to further my education at Calvin.

Max: I enlisted when I was a senior in high school. I felt called to do so. Additionally, the military provided me with a second chance at an academic future, as college was not exactly a possibility for me after high school. The military has given me everything and I am extremely grateful for my time in the Air Force.

Sara: I was always interested in traveling so I was thinking about doing travel nursing for a while. But my husband was a medic in the Army, and he had some great experiences and made some lasting friendships. That led to me looking into options in nursing. I also wanted to do something that not everyone else does. The final decision maker was the loan repayment. I ultimately want to go into medical missions, and I figured I would get there faster if I didn’t have school loans hanging over my head.

What are you studying at Calvin?

Jesse: I am studying in the master in geographic information science program (MSGIS).

Max: I am a history major.

Sara: I am working on my master’s in public health.

Why did you choose to pursue and/or continue your education at Calvin?

Jesse: I got my undergraduate degree in geology from Calvin and took several GIS classes in my undergrad. The MSGIS program has allowed me to continue studying in a field that I love and learn to visualize data in new ways with guidance from professors that I have already built relationships with.

Ashley: I chose to continue my education at Calvin because it aligns perfectly with my personal and professional values.

Max: I transferred from WMU. I chose to transfer here because I wanted to attend a smaller school, have more challenging academics, and grow in my faith.

Sara: I received my BSN from Calvin and when I graduated there wasn’t the option [master’s in public health) yet. I noticed last year that Calvin now had an MPH option, and I just knew I had to continue with Calvin.

Learn more about how Calvin University supports those who have faithfully served in the military.

What's next for you?

Jesse: I have been able to use my knowledge of GIS to enhance the readiness of the unit, preparing pollution modeling and producing a visualization of those models has been one of my favorite parts of this job. I hope to continue to use what I have learned in school in the civilian world once my contract is up.

Ashley: With my Calvin education, I hope to re-enter the Army as a commissioned officer as a speech-language pathologist.

Max: I am on track to graduate in December 2023, and I am applying to law school next fall. I am considering pursuing a path to become a military lawyer, as well as other options.

Sara: I’m not entirely sure yet. I’m definitely good at keeping my options open and seeing where exactly God wants me when the time comes. I would really love to be involved in medical missions in some capacity no matter what I do.